Ready To Spend Almost 10k For One Pour Of Scotch? This 1919 Miniature Is Your Answer | Whiskey Raiders
Article

Ready To Spend Almost 10k For One Pour Of Scotch? This 1919 Miniature Is Your Answer

A 1.7-ounce bottle of Scotch bottled in 1919 sold for almost $9,000 at Whisky.Auction is making it a record-breaking sale as the most expensive miniature ever sold.

Sold by Sukhinder Singh, a miniature whiskey collector who started his collection in the 1980s, he made quite a killing at this particular auction. By the end raking in $78,130.07 total, after commission, for the bottles he sold. 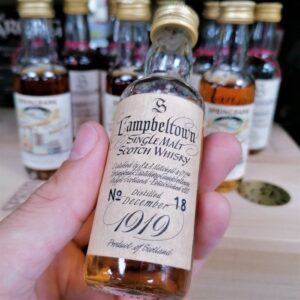 “We have seen a wonderful renaissance in the appreciation of rare whisky miniatures,” said Isabel Graham-Yooll, director with Whisky.Auction. “Bidders are willing to pay what seems like a lot of money for tiny bottles of whisky, but it is the opportunity to taste a piece of history … particularly when standard 70cl or 75cl formats have become inaccessible for many enthusiasts to buy.

While the rare and old miniatures end up being astronomically expensive, the starting bids at Whisky.Auction starts around $2, making starting a collection completely reasonable. Especially if it means making 80k in 40 years.