A Taste of Passion: Rémy Martin Taps Usher for Campaign 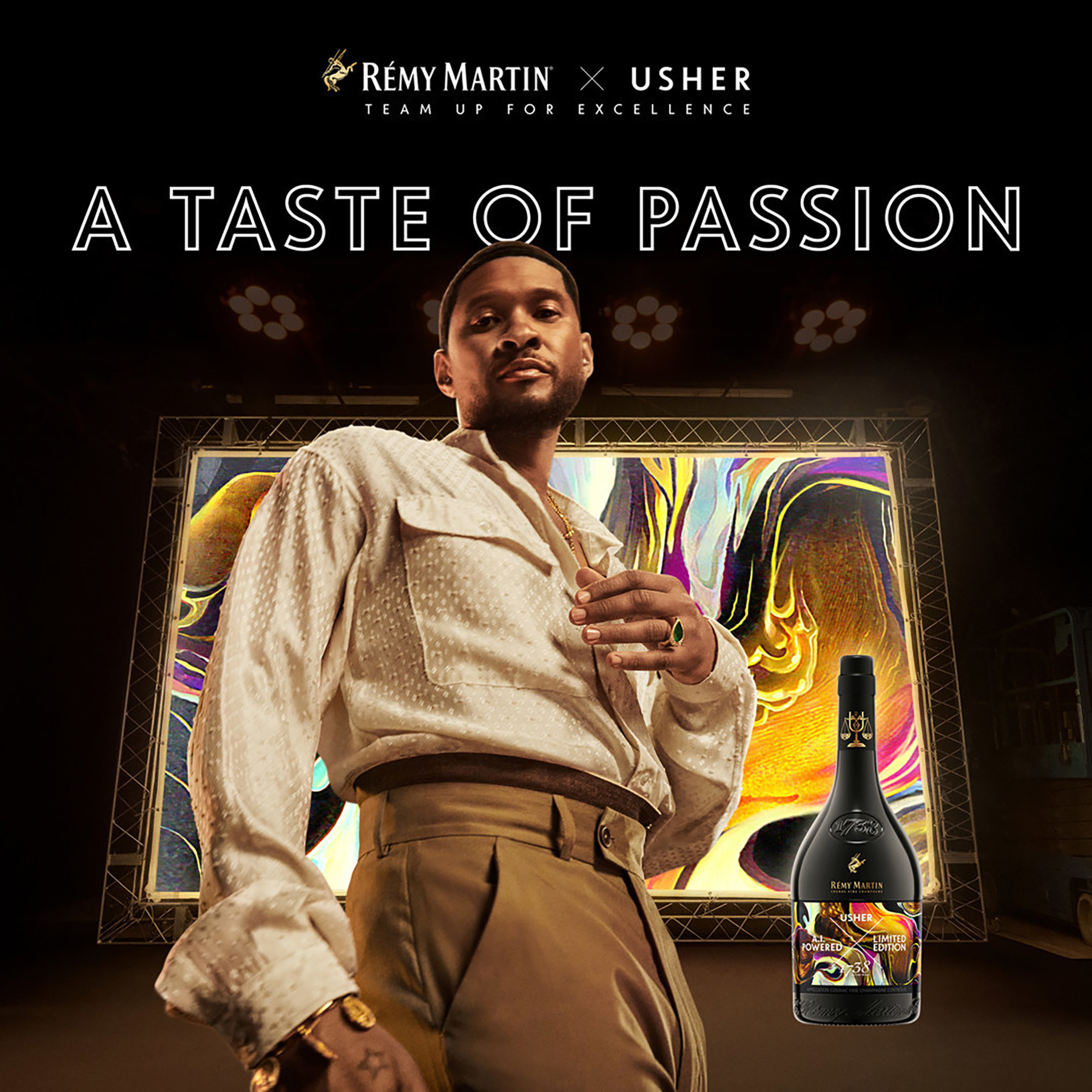 Usher and Rémy Martin are teaming up for a global campaign titled “A Taste of Passion.” (Photo: Rémy Martin)

French Cognac firm Rémy Martin on Monday announced that it has partnered with Grammy award-winning artist Usher to launch a global campaign. The campaign is titled “Usher x Rémy Martin 1738: A Taste of Passion.”

The campaign will comprise the release of a limited-edition bottle and NFT whose design was inspired by AI-integrated technology.

“For nearly 300 years, excellence has been at the core of Rémy Martin, and through this partnership we’ve reached an incredible milestone, where we see brilliance breakthrough at the intersection of art, fine cognac, and technology,” Amaury Vinclet, global executive director of Rémy Martin, said in a news release. “As a brand that has been a long-time collaborator with Usher and shares the same values, we are proud to have him launch the first limited-edition bottle design for Rémy Martin 1738 Accord Royal. This bottle is a first for the spirits industry in how the technology was used and gives spirits aficionados and Usher fans alike a rare collectible they’ll treasure forever.”

Usher created his own tasting notes for Rémy Martin 1738 Accord Royal. Rémy Martin fed those tasting notes into A.I. technology called Generative Adversarial Neural Networks and Contrastive Language-Image Pre-Training. The technology turned Usher’s words into artwork, which was used in the design of the bottle.

“I’m an artist at my core, so transforming an abstract sensory experience like taste into something visual really spoke to my creative process,” Usher said. “I leaned into the exemplary Rémy Martin 1738 Accord Royal that flowed through me and am so impressed by the visuals that came out of the A.I. process – they truly represent the medley of tasting notes captured in the flavor. It’s rewarding to see those words translate to real-world artwork that my fans can engage with while bringing taste front-and-center.”

Fifty Usher x 1738: A.I. Powered limited-edition bottles were created as part of this collaboration. Twenty-five of the bottles will go to Usher and his team to celebrate the 25th anniversary of his second studio album, “My Way.” The remaining 25 bottles will be available for purchase on spirits-NFT platform BlockBar.

The BlockBar drop will go live at 10 a.m. EST Friday on a first-come, first-served basis. Each NFT will be available to purchase for $500 with ETH or credit card. Users who successfully check out will receive an NFT proving ownership of the physical bottle. The bottle will be stored with BlockBar until the bottle owner redeems it.

Each NFT will come with the option of keeping the NFT, reselling it on BlockBar’s marketplace, gifting it or redeeming it for the physical bottle. The option to redeem bottles will be available starting in October.

“We’re very excited to be part of such a big moment for Rémy Martin as they enter the world of NFTs and launch a new limited-edition bottle which will be our first ever music collaboration to drop on BlockBar.com,” said Dov Falic, co-founder and CEO of BlockBar. “As a globally recognized brand known for craftsmanship and excellence, we are honored to have the opportunity to offer a rare collectable item that has been created by one of the world’s most celebrated artists, Usher.”