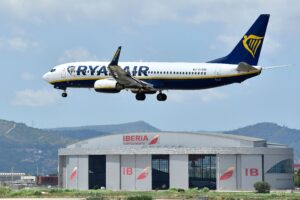 A Ryanair Boeing 737-8AS aircraft flies over an Iberia hangar as it lands at El Prat airport in Barcelona on July 1. (Photo by PAU BARRENA/AFP via Getty Images)

The return of booze to airlines has brought the return of bad behavior — from the travelers but also flight attendants. This week, Sam Thompson, a flight attendant on duty for Ryanair, clocked in at four times over the alcohol limit for cabin crew during a flight, according to the Sun.

The steward was arrested and fired after he was caught on camera downing a small bottle of wine and drinking Jack Daniel’s Whiskey while the flight was in progress. The 26-year-old admitted to the Chelmsford magistrates’ court to being impaired by alcohol and has been threatened with jail time by a prosecutor there.

The above tweet posted by Conrado Aviation translates to say: “British newspaper The Sun: Cabin crew Sam Thompson, 26, was caught drinking wine and Jack Daniels from a drinks trolley in front of a passenger on board a Ryanair flight. He was arrested upon landing after the captain was alerted.”