Saving the Sharks One Barrel at a Time | Whiskey Raiders

Saving the Sharks One Barrel at a Time

Jefferson’s Bourbon currently has four whiskey barrels aboard the MV OCEARCH in a partnership to research and track keystone marine species such as great white sharks; and, of course, aging great bourbon.

Aging the bourbon at sea came from an idea Jefferson’s Bourbon founder Zoeller had. “That constant movement of the liquid in the barrels ages the whiskey faster because more of the liquid is in contact with the wood more often.” Zoeller strapped five barrels to a 126’ Cat-powered vessel that serves as OCEARCH’s mothership and at-sea laboratory. Says Jefferson’s Bourbon. 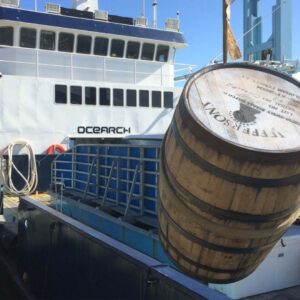 The first batch was aged three years at sea and passed the Panama Canal six times. “When we tapped into the barrels, it completely exceeded my expectations. The liquid was black, almost syrupy. The sugars had caramelized. It was fantastic.” Zoeller says of the bourbon.

Currently, the MV OCEARCH is carrying four barrels of Jefferson’s Bourbon. Simultaneously, it makes seasonal expeditions to gather data on sharks’ ecology, physiology, and behavior in the North Atlantic Ocean. OCEARCH also hopes to increase the sample size of the Great White Shark research according to Jefferson’s Bourbon.

If you get the chance to check out the OCEARCH tracker, you should do it. It is a bit addictive seeing where all the sharks are. Some even a bit too close to the beach for comfort.

OCEARCH can collect samples from sea animals on what they refer to their ships as an “at-sea laboratory.” The process allows them to secure the animal, execute their tagging, testing, and getting samples in under 15 minutes, with minimal stress put on the animal. All while the whiskey barrels are rocking away on the ship aging to perfection.

It is refreshing to see a collaboration between such an unlikely pairing and how they both benefit from it. We love seeing company’s team up like this and work together for a greater cause. All we can say is, we can’t wait to try the newest batch age at sea.

If you’d like to pick up a bottle and support the cause, you can get one from ReserveBar today- but not before you check out our Raiders score of Jefferson’s Ocean Cask Strength Bourbon.