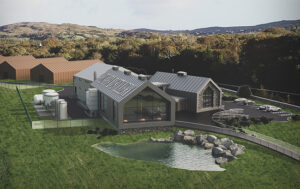 Sliabh Liag Distillery is set to launch a new equity round on Crowdcube to raise €2 million ($2.1 million) to boost production capacity and extend the reach of its Irish whiskey. The campaign will run for four weeks, beginning on June 20, and will be open to pre-registered investors via the distillery’s website.

Sliabh Liag Distillery is seeking to invest in the infrastructure and raw materials to produce stocks that will be consumed in many years. The company’s sales volumes for all of its brands – Silkie Irish Whiskeys, An Dúlamán Gin and Assaranca Vodka – grew by 166% across 2021 despite the economic turndown.

We are crowdfunding!! The time has come for us to once again give our followers an opportunity to become a shareholder in Sliabh Liag Distillers. Crowdfunding opens to pre-registered users on Monday 20th June, visit https://t.co/lV6ikmPnmT now!

Sliabh Liag Distillers is looking toward future opportunities and sees this investment as a way to ensure its products are available and profitable down the line.

Sliabh Liag Distillers managing director James Doherty explained to The Drinks Business that he hopes that this will give the distillery a chance to reclaim the heritage of Donegal, Ireland’s traditional whisky, offering a return to its distinctive smoky style.

“The new wave of growth in Irish whiskey, and the 15x category growth we have seen with the Silkie Irish whiskeys, reflects consumers embracing the depth and diversity that was once prevalent in Irish whiskey and who are now enjoying the return of styles that were almost lost,” Doherty said. “Our regionally distinctive soft drinking, smoky style that would have been typical in Donegal years ago is at the vanguard of this movement.”