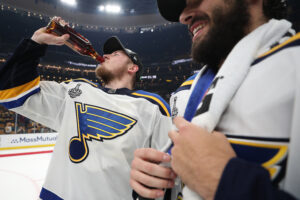 With the Stanley Cup Playoffs kicking off this past weekend, it’s a good time to remember when the St. Louis Blues won the NHL Championship in 2019.  Most sports celebrations are centered around showering teammate with beer or champagne, but the Blue’s Left Wing Robby Fabbri had other, more expensive, plans.

After a 4-1 win over the Boston Bruins in Game 7, Fabbri cracked a bottle of Van Winkle Family Reserve 13 Year Rye Whiskey and started drinking straight from the bottle while still on the ice.  Whiskey fans were either mortified, or applauded him for opening the bottle and enjoying the drink for a well deserved reason. Why the potential outrage? The whiskey carries a $120 MSRP but routinely fetches close to $2000 on the secondary market.

Whichever team gets to lift Lord Stanley’s Cup at the end of the playoffs, let’s hope they have an even better way to celebrate it.  Whiskey is meant to be enjoyed and life accomplishments should as well.  Whether you are a professional hockey player, a new parent, or just happy with where you are in life, it’s never a good time to celebrate and open that nice bottle.