‘Don’t Drink and Boat’: Underwater Bar Opens to Remind Sailers to Abstain From Booze While Out on the Water 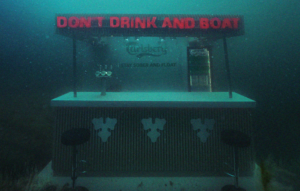 Looking to cut down on drinking and boating accidents, Carlsberg Sweden has built an underwater bar at the bottom of the sea.

The bar measures 3.5 meters (11.4 feet) in width and 2.5 meters (8.2 feet) in height and comes complete with a bar counter, bar stools, neon signs, beer cooler and taps. During the week, there is an opportunity for holiday guests on the west coast to visit the underwater bar, which has been sunk outside the seafood restaurant Gösta’s fish and Smögen’s fish auction. 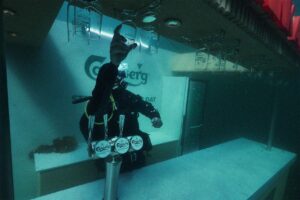 “As a leading brewery and distributor of alcoholic beverages, we have a responsibility for how our beverages are consumed. Our ambition with the underwater bar is that it will be an important reminder to abstain from alcohol at sea, and instead choose an alcohol-free alternative,” said Henric Byström, communications manager at Carlsberg Sweden.

When Carlsberg first invested in alcohol-free beer, it was met with skepticism from the public. However, more and more Swedes have caught on to the alcohol-free trend, and now the population drinks just over 20 million liters of alcohol-free beer every year.

This change is due in part to the growing awareness of the health risks associated with alcohol consumption. But it’s also because alcohol-free beer has come a long way in terms of quality and taste. In fact, many experts agree that today’s alcohol-free beers are virtually indistinguishable from their alcoholic counterparts.

“For those who still want to enjoy a good beer on the lake, there is now a large selection of tasty alcohol-free beer. At Carlsberg Sweden alone, we currently have 15 different alcohol-free brews in our portfolio,” Henric Byström said.