Teeling Whiskey has been honored by the World Whiskies Awards with the title Best Irish Single Malt for their 28 Years Old Vintage Reserve for the third consecutive year.

Teeling Whiskey has always had a reputation for releasing quality bottles, but their vintage reserves are particularly impressive, and this bottle is no different. In fact, it was the highest-rated Irish whiskey, boasting a score of 96/100 at this year’s competition. 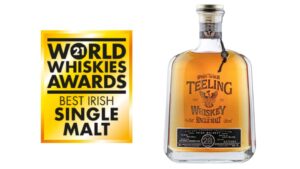 If you are lucky enough to get your hands on a dram, you can expect notes of dark chocolate and raspberry as well as a balanced finish. With an ABV of 46%, this 28-year-old whiskey is retailing around $800. Get your hands on a bottle here.

With the anticipated release of their 30 yr coming out later this year, the company hopes to continue its winning streak. It will be interesting to see how the future awards circuits pan out for the company, but for now, we can all raise a glass to their current and continued success.