Not only was the Kelvin Collaboration the first batch they ever released back in May 2019, but it is also one of the highest-rated whiskeys of 2019 and 2020, according to the Four Gate website. The company says they have done their very best to make it the best one they’ve released yet, and believe they have succeeded. While working closely with Kelvin Cooperage, the distiller and the whiskey company have blended a nine-year and a 12-year Kentucky Straight Bourbon. 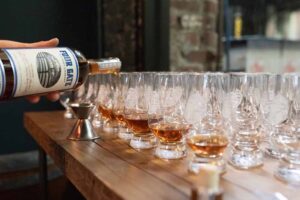 Clocking in at 123 proof, the Kelvin Collaboration III is a Kentucky straight bourbon whiskey finished in PX cherry-rum casks. It has a nine-year Mashbill of 75% corn, 13% rye, 12% malted barley, a 12-year Mashbill 74% corn, 18% rye, 8% malted barley.

With only a bit over 2,000 bottles produced, this will be a highly coveted whiskey and one you will want to jump to get your hands on, but it will set you back about $200. However, if it’s anything like the other releases we’ve seen come out of Four Gate, it’s well worth the money.