However, they aren’t the only beverage giant out to claim their stake in the mixer/cocktail world. Coca-Cola has also teamed up with five prominent bartenders to create signature mixers for people to enjoy cocktails from home.

It’s also worth noting that this is not Pepsi Co’s first foray into the mixer world. Neon Zebra was released earlier this year by them as another convenient cocktail from home.

Why the big push to create a convenient cocktail mixer for consumers?

Emily Silver, PepsiCo North America’s vice-president of innovation and capabilities, said: “With at-home cocktail consumption on the rise, we saw an opportunity to build and disrupt this fast-growing category with a product that meets consumers’ needs for convenience – to cut out time and mess without compromising on quality and taste.” 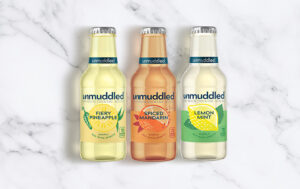 Unmuddled contains no artificial flavoring and is all juice. Coming in three flavors, Fiery Pineapple, Spiced Mandarin, and Lemon Mint.

Unmuddled will be sold on Amazon and Fresh Thyme for $6.19 as single flavor four packs.

While I personally never thought there was so much of a need for a cocktail mixer that’s anything other than a coke, it’s nice to get a bit of variety without having to buy the entire bar.