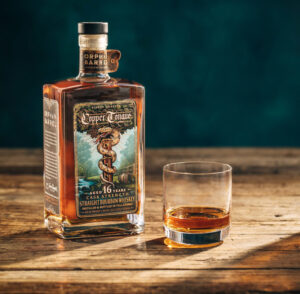 The newest whiskey in the Orphan Barrel line has been announced.  Copper Tongue is a 16 Year, Tennessee Bourbon distilled at Cascade Hollow Distillery (where George Dickel is distilled).  The barrels were selected by Cascade Hollow Master Distiller, Nicole Austin, and bottles will start to show up at retailers in June.

The release comes at an interesting time to try and fit into the Diageo lineup.  The company just announced the latest release of George Dickel Bottled-In-Bond, which will carry a 13 year age statement and a $45 price tag.  Diageo also recently released George Dickel 15 year Single Barrel, a high strength bourbon only a year younger and priced at $60 a bottle.  Copper Tongue will retail for $100 and makes a hard sell to consumers with their other, similar sounding bottles.

Orphan Barrel aims to distinguish themselves from the other comparable bourbon’s on the market by Austin’s Award Winning ability to select barrels, and to draw parallels between American and Scotch Whisky.  The selected barrels all came from single story rickhouses that were inspired by how Scottish distilleries store their barrels.