The Road To Laphroaig: Part 3

We left off on the links. The Guinness Golf fairway, to be precise. If you’ve never played Guinness Golf, it’s pretty easy. 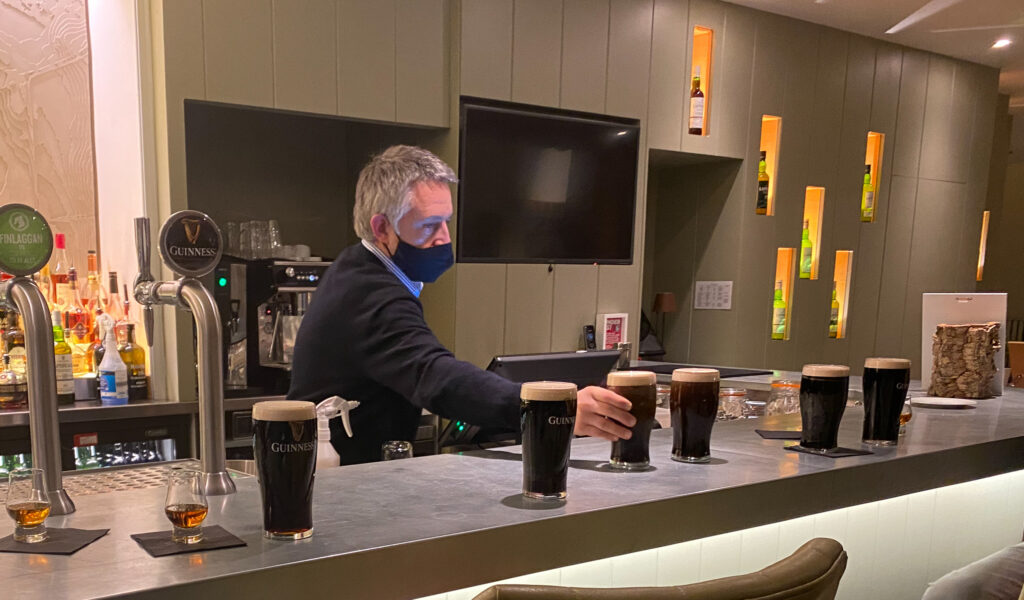 It involves a fair amount of Guinness. A great way to settle bets or contests, we’d later find, you kick off with a freshly poured pint. Guinness typically comes in a specially branded glass, with the Golden Harp nestled nicely above the Guinness font about 1/5th of the way down the glass. The rules are simple, approach your glass, address your fellow golfers and after a cheers-down-up, you have one drink to hit a winner of a drive. You can take more than one drink – everyone needs air – but your mouth can’t leave the lip of the cup, and you can’t put it down. The smoother the better. When you think you’re in the ballpark, you set down your glass and compare with your fellow golfers. Price Is Right rules apply, and the winner is the drinker leaving the Guinness lined up as closely to the top of the ‘uinness’ text on the glass.

It sounds dumb, and that’s because it is, but it’s a world of fun, and always keeps the conversation and laughs going. Why did I waste 200 words telling you about this? You’ll find out near the end of this series.

We played a couple rounds after dinner with the Beam/Laphroaig staff. While we enjoyed a bit of Bowmore 18 and Aston Martin on the side, we mostly just settled in, caught up, and shared stories and experiences from our respective slices of the industry and country. It was windy as hell and we took up residence in the stone lounge room, with a nice fire going. We also met a few additional friends, also Protectors of the Peat who belonged to other markets who had been stranded by a series of weather related events. The ferry was canceled, the sole plane from Islay to the mainland was canceled, and they’d be tagging along for another day…at least.

We called it a night, slept soundly, woke up and assembled for breakfast. Nick and I took a walk before food was served to get the lay of the land, some fresh air, and a look at the sea. I’d go on to try some light vlogging, which ended in nothing but noise for the most part. I’ll spare you that, but boy was the shore and sea pretty. Every wave was a white cap, and even when the sun was bright, you were cold.

It was time to head back so we could eat. We’d be spending the day at Laphroaig at long last, and it’d be good to have a base. And coffee. Coffee was essential, and thankfully: very good. 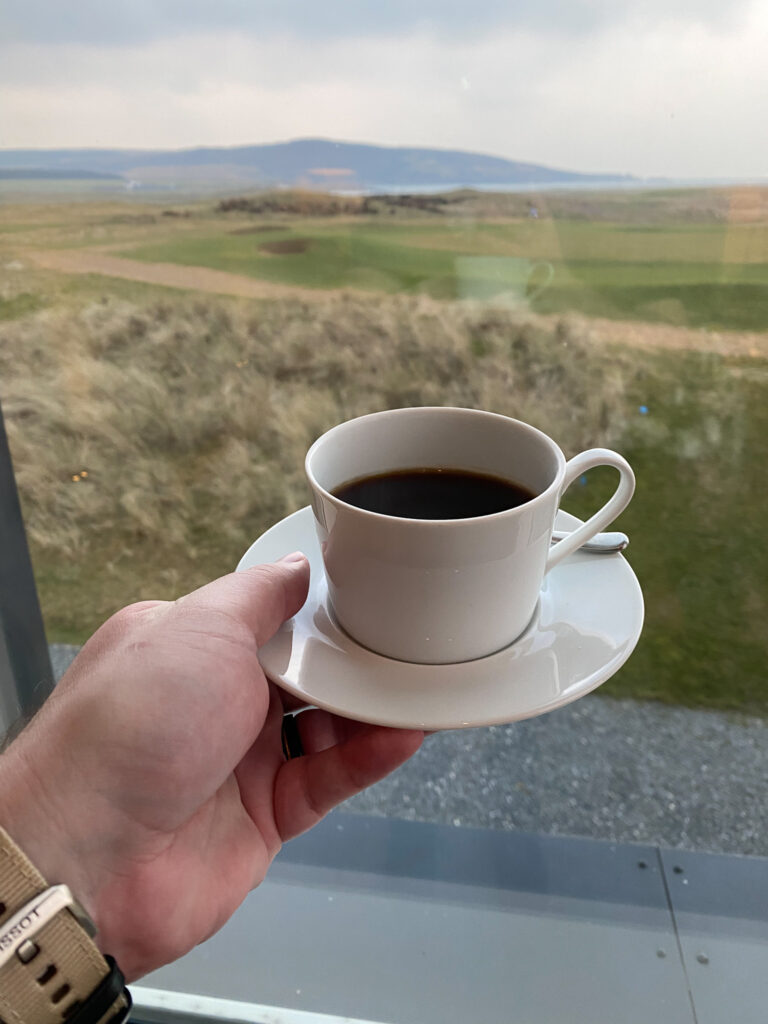 Everyone got their travel dram, the Wee Glen on a lanyard, for convenient, low-risk, hands-free Glencairn transportation. A stunning combination of design and convenience, a hands free dram is never a bad idea. Stuart met us at the Machrie and we were off to the distillery.

When we arrived, we were greeted by Simon Brooking once more, Tracy from the visitor center staff and they led us into the distillery. Notably, you pass a really cool mural of opinions about Laphroaig – not nearly as many of them glowing as you’d expect – bright, colorful and adjective laden. 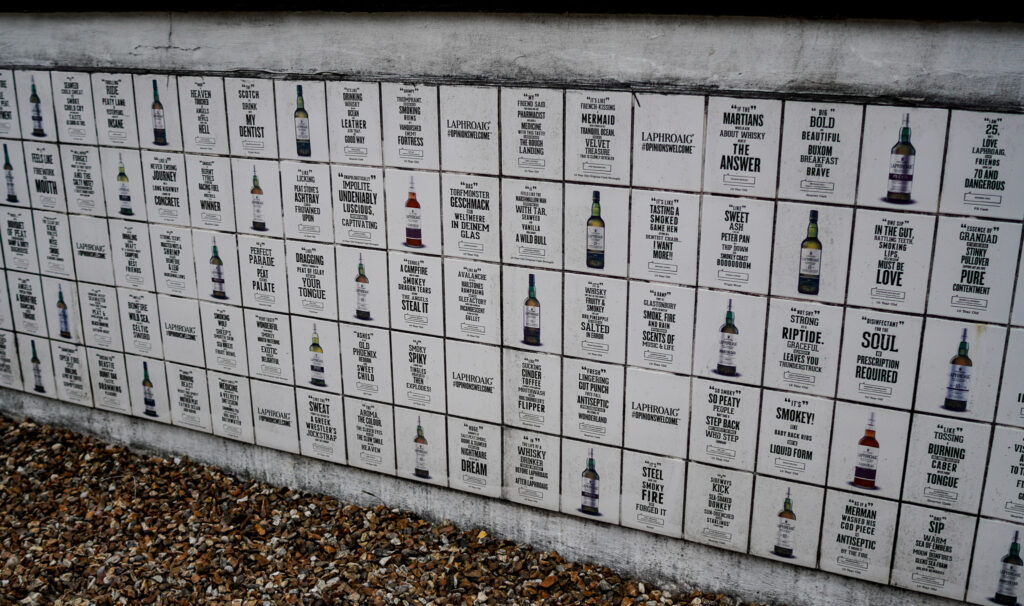 We also got our first pin of the trip – it was now official, we were here for a single cask of Laphroaig, and the Single Cask Selection experience had begun. 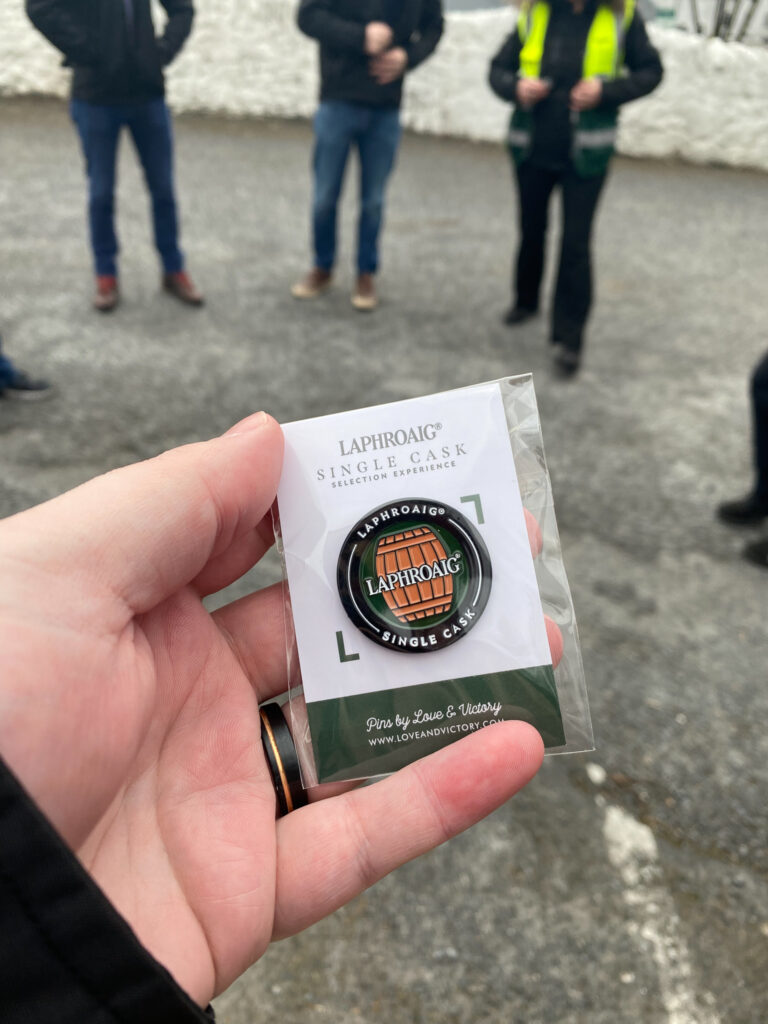 From there, we’d say hello to Barry MacAffer – the star of the show – who’d just been promoted to Distillery Manager at Laphroaig. He informed us it was his first week on the job, and while there were many things to be done, he also had an incredibly competent Assistant Distillery Manager. She’d run things while he hung out with us. He kicked off our time together letting us know there were no planned fire drills during our time there, so if we heard one go off, we should meet in the parking lot. This was a curious first tidbit to start our tour, but he didn’t seem too worried, so I wasn’t either. The ocean was right there, after all.

Outside his office, we got to see two iconic sights right away – the massive black ‘LAPHROAIG’ lettering on the side of the main building, facing the sea. 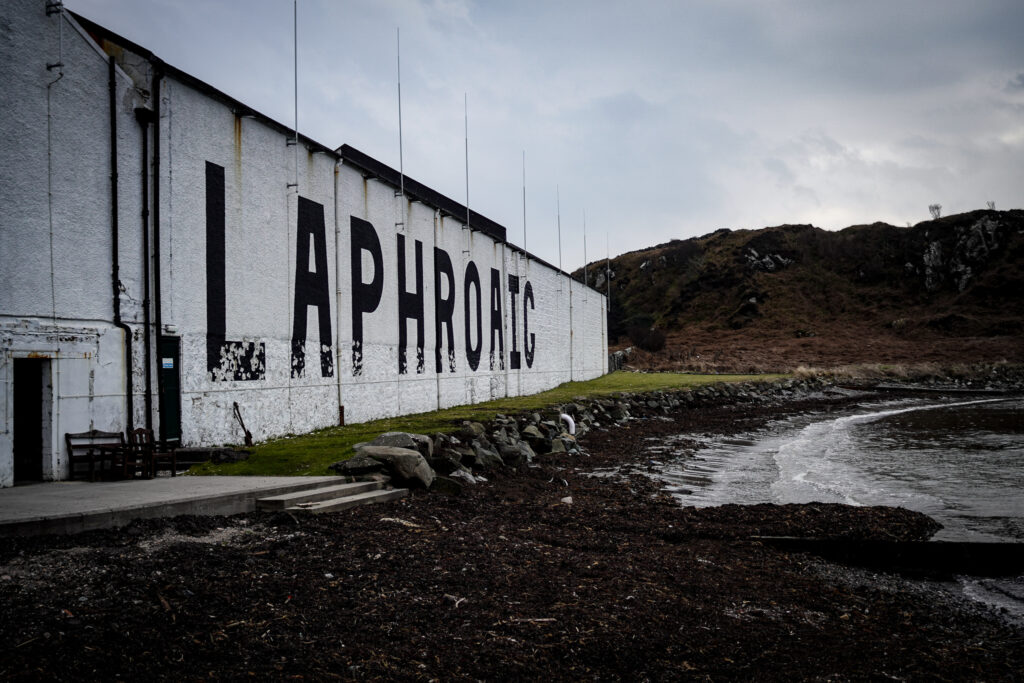 Opposite that was the painted ‘200 Years of Laphroaig’ insignia on the high peak of the gift shop and malt house building. Grabbed pics at both, and a pour of Laphroaig Select and we were off. 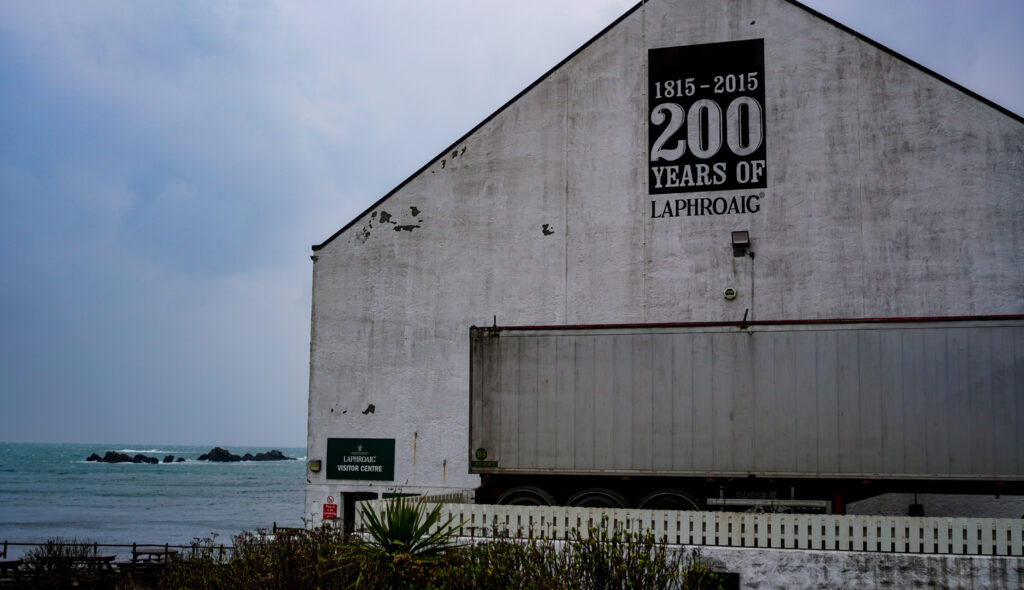 Simon lead us in another toast – my favorite of what would become many, many toasts while informing us that Laphroaig Select is made to be ‘breakfast whiskey’ – easy to enjoy, great in porridge, excellent for cocktailing, or simply drinking early in the day. No complaints. “May there be no hell, but if we shall find ourselves there, we’ll meet at the bar”. Light paraphrasing because, well: breakfast whiskey. We checked out the gift shop on our way into the facility, checked out the small museum next to the shop, and then headed into the facility.

Laphroaig has several stories of malting floors. Here, they malt 14 tons of barley per floor. They can do 2 maltings a week, so 28 tons per floor of barley per week. Each 14 tons of barley yields about 450 liters of pure spirit, which also explains why Laphroaig sources additional barley from Port Ellen Maltings on the island. We all took a shot at turning the malt. Here the term ‘Monkey Shoulder’ (sound familiar?) originates – seasoned malt men were known to have one shoulder much larger than the other, significantly more muscular thanks to all of the turning. It wasn’t particularly easy, the fun wore off briefly after starting, and the manual aspect quickly made sense. They also had this interesting contraption that looked like a number of hoes, attached to a rake. Walking quickly across the floor and pulling it with a motion not unlike rowing would also flip the grain, and mount it to allow a little extra surface area to get more oxygen. Tasting the barley was magical, a great snack, and it was interesting to taste the malted barley so close to the sea, pre-peating. 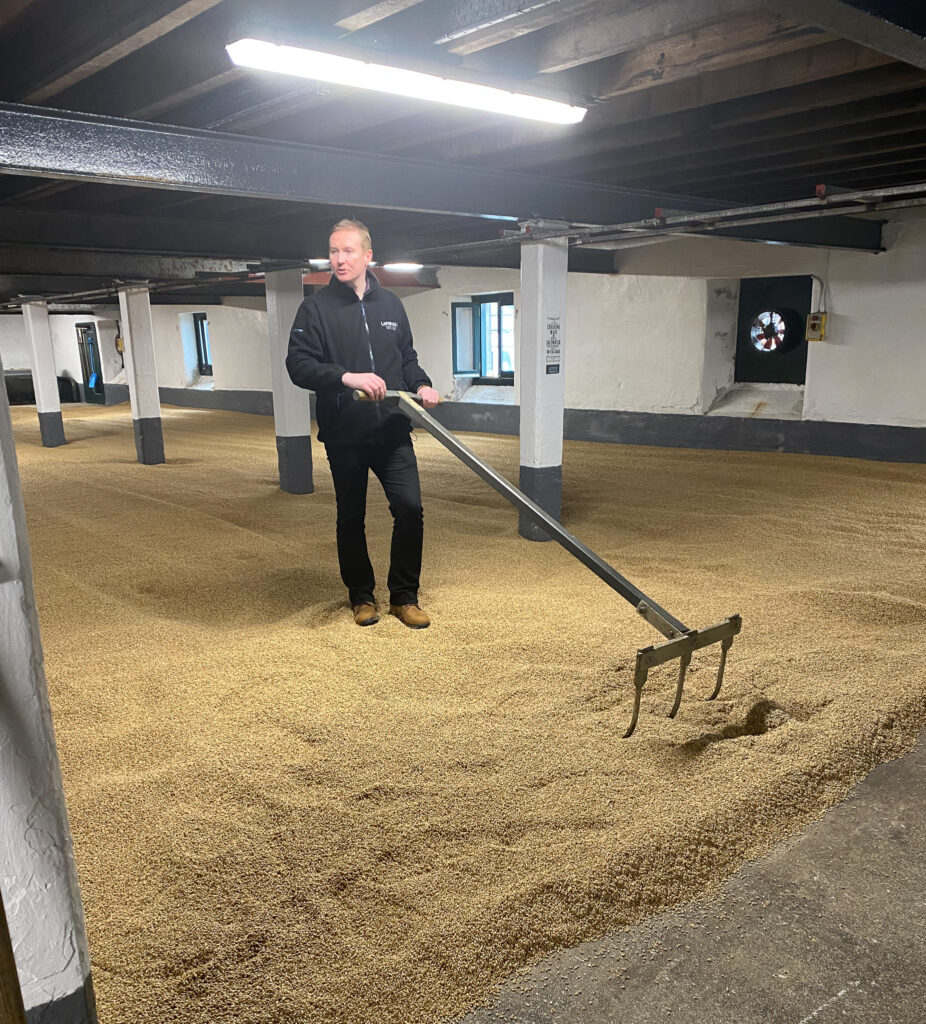 We climbed a couple of floors to see where Islay water was stored and tanked – oddly brown and peat forward. When the barley was completely malted and ready to be ground, the malt men would release a hatch in the floor, and push all of the grain into the chute, which dropped to the first floor and then fed a large conveyor/lift. From here, the peating would begin. 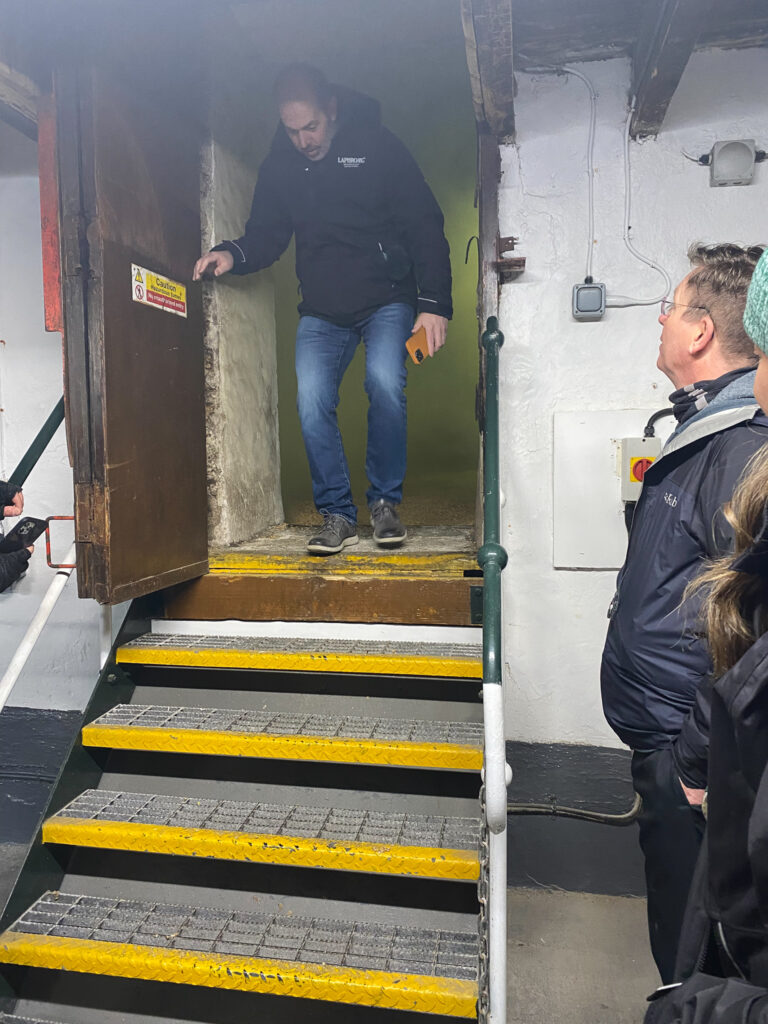 The green is peat smoke.

Laphroaig is really interesting – they cold smoke the malt, and then they move it to a new chamber for heated drying. The barley they source from Port Ellen Maltings is is lower in ppm – below 45ppm, so they over-smoke their own barley to make up for it. The goal is 65ppm, but they’ll let it go as high as 69 or 70 before adjusting. Blending their malt with the Port Ellen Malted Barley brings their peat balance right in line with what they’d prefer.

From the malt floor and smoker / oven space, we headed down to the peat furnace itself. This is where the peat is actually burned, which fuels the smoke room a story or so above. What I didn’t really realize was that while you burn the peat, it’s not generating enough heat at Laphroaig for actual drying. It’s the team’s careful responsibility to make sure that the peat is burning, but just enough to smoke. A lot. If it gets too hot, they bring the flame back a bit, as well as keeping the furnace stocked just right. We all shoveled a bit of peat ourselves, took a great big inhale from the furnace, and shared another glass of Laphroaig: this time, the original, smoky, 10yr. 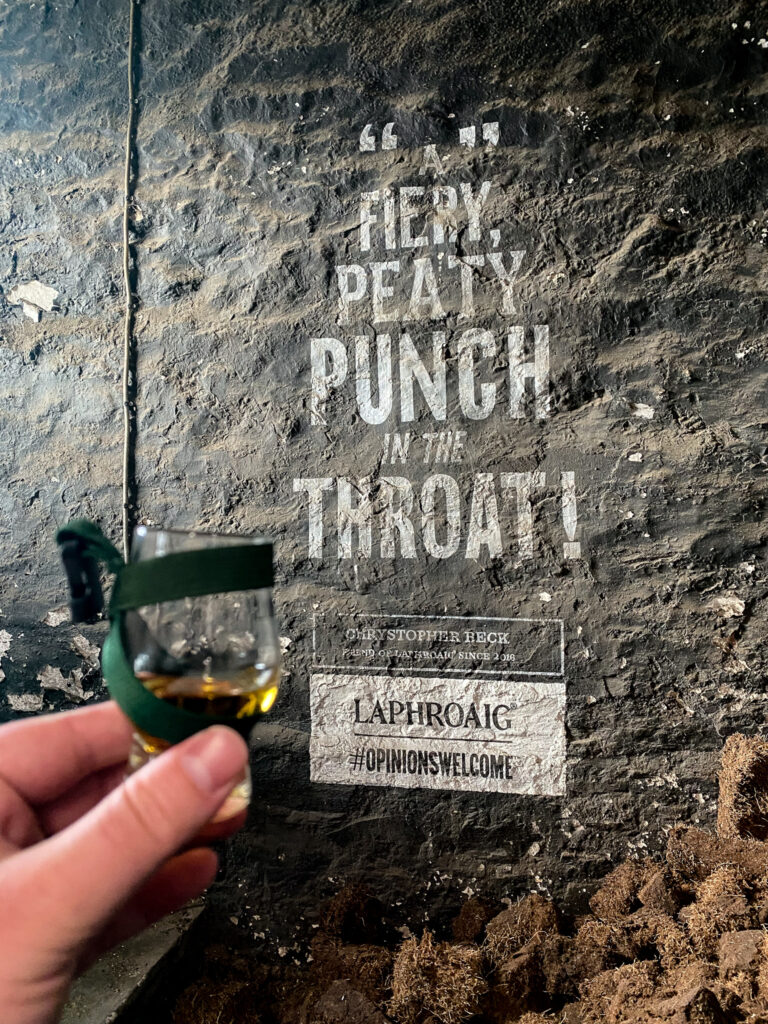 We lingered for a while. It smelled just too good, and we were enjoying a great photo opportunity and an opportunity to ask about their peat source, how they were managing their malting and peating levels, and all that nerdy stuff. From there it was time to move across the small road the bisects the distillery (it really is small, one lane). It had begun to rain while we were sniffing peat and malt, and if you thought the distillery smelled…powerful before, it’s a whole other story once the rain starts. Walking outside, the entirety of the air that hung between the buildings smelled like straight brine and ash. It was wild. We moved in to meet some more staff where mashing and fermenting were taking place, and enjoy a sip of wash. 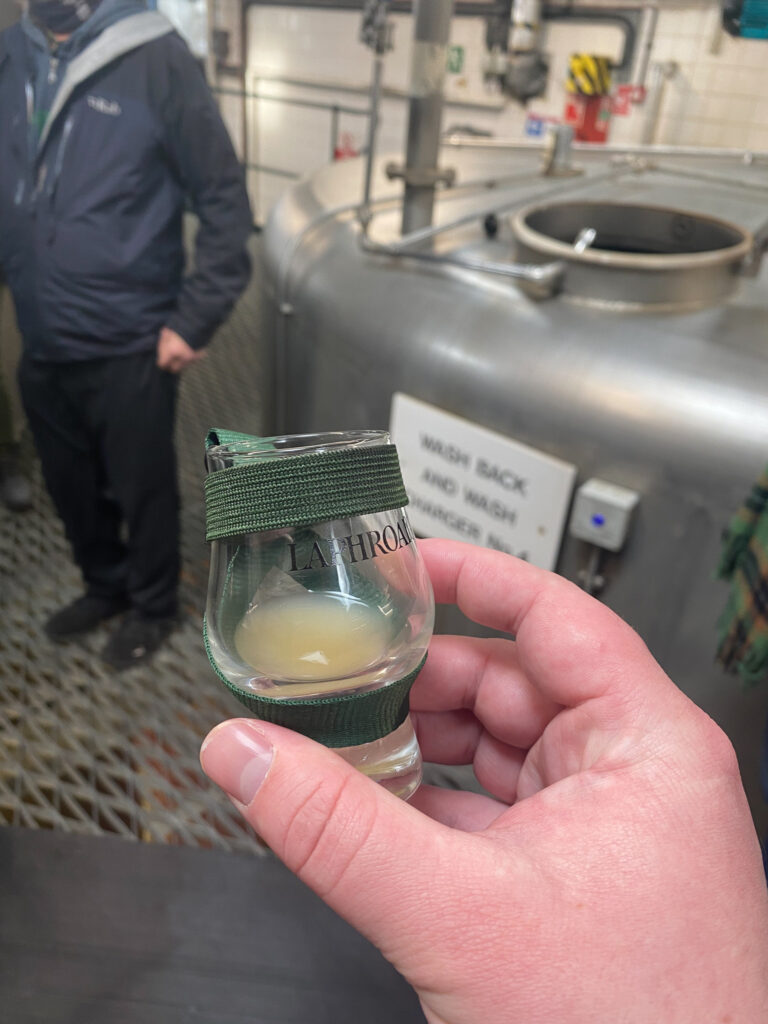 Laphroaig is in the middle of expanding to add additional fermenters. I got excited,  I thought was an indicative piece of scaling up. Barry let me know when I asked that instead of scaling up (growth in volume), they were scaling out (they wanted to be able to ferment longer, while still maintaining output). This is more expensive, but they’re convinced that a longer ferment will bring more character to the malt for distilling. So, the upgrade to their capacity won’t really affect capacity at all, other than allowing them to produce what they’re making now, but with higher quality results. That surprised me, for a company owned by the megacorp Beam/Suntory, but I thought that was pretty cool. We sampled some of the mash, and whew, it was interesting. Murky, dirty, chalky, laced with lemon curd and honey and a bright, smoky note. Fascinating to say the least. 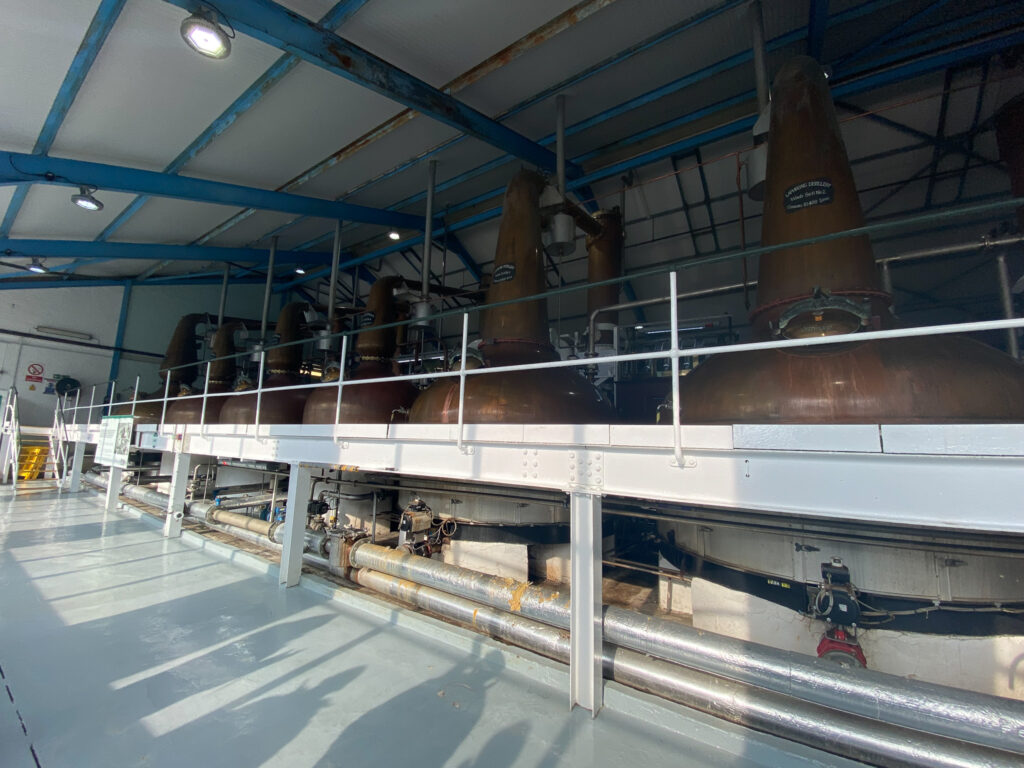 Working one building over were the stills. The property has 7 stills, all in a line. Three are 9,400-10,400 liter capacity stills, and four are 4,700 liter capacity stills. They ensure the arms rise off the still here, rather than a flat or downward angle to achieve their favored flavor. Tasting some distillate right off the still was incredible. For 62.5% ABV – their still strength, it was so incredibly vibrant, fruity, silky. I expected dank, peaty, ashy spirit but the distillate was so incredibly lively. It was incredible. It really shows how much the barrel and the atmosphere really interact with the spirit over the years of aging. I wasn’t ready for how big this divide was – I expected so much more to stem from the distillate, but I could have sat there and sipped all day. Lemon curd, buttery biscuit, low acidity, super silky, it had this stone fruit, charcoal, sweet cream character. Incredible. We spent the better part of a half hour hanging around the stills, tasting, chatting and getting a look at the spirit safe.

This is where we’ll break for today, because it was time to leave the still hall and get to tasting some barrels after a wander through some warehouses. And taste, we did.