The Road To Laphroaig: Part 5

I’ve been on an oyster kick lately. I don’t know why. It started voraciously after meeting my buddy Will in NYC for lunch back in January. We split some oysters before lunch. I forgot how great they are. I couldn’t kick it after that. It had been yeaaaaars since I had oysters. From January to March, if I could snag one or two on the half shell here or there, it made my day.

Imagine the dumb look on my face when our lunch consisted of Scottish oysters, not yet 4 hours old. Good gravy. I’ll admit that while I tried a wide variety of local meals in our time so far, I usually found it satisfying but not exceptional. Haggis was weird. I fervently passed on blood pudding. Cod cheeks, pork cheeks, lamb mince were all pretty darn good. But nothing really lit up that dumb light in your brain that shines and says “I’ll never forget this meal”. 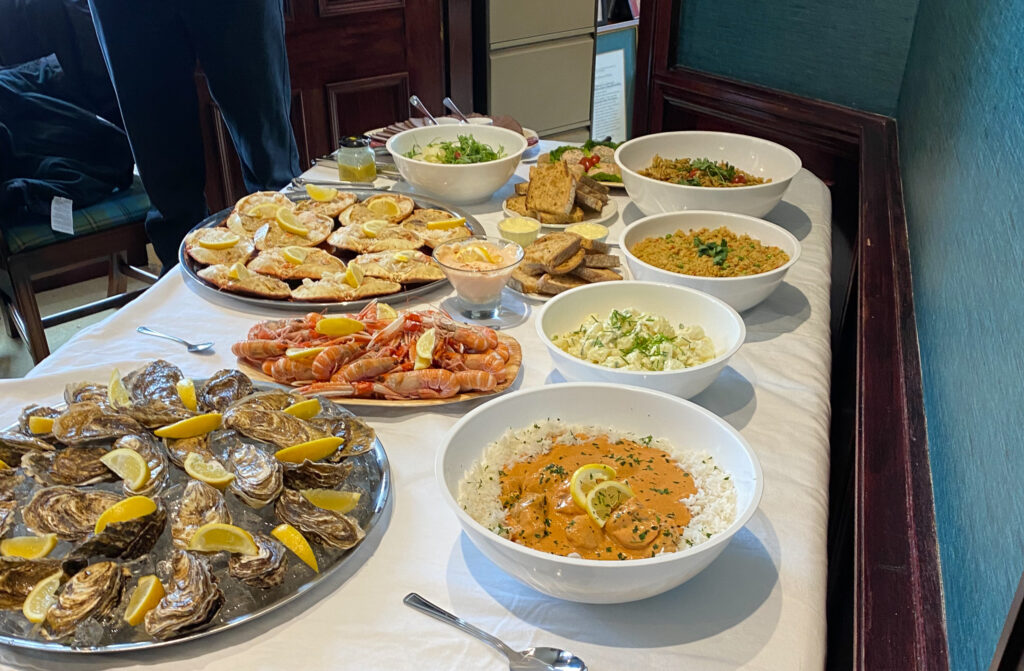 Anyways, I don’t mean to harp on lunch after our first cask exploration, but it’s important to me to not understate how phenomenal fresh, Scottish, seafood is. Oysters, prawns, shelled crab and scalloped curry all made up the meal, and each came from the day’s catch, thoughtfully prepared and presented by a local vendor who retired and wanted to focus on the fun of feeding people. If I died in that moment, it would have been just fine with me. But, I didn’t, so I ate a few more prawns. We all agreed that no oyster was to be left behind. We may be American tourists, but we weren’t wasteful. It was our duty.

At Laphroaig, you’re welcomed to become a Friend of Laphroaig. Every purchase comes with the invitation to visit the distillery and claim a square foot of land to plant your flag. The distillery pays you rent in the form of 1 tubed mini of Laphroaig 10yr per year, if you elect to show up. The field where you claim land is a bit outside the distillery’s formal grounds. That’s where the boots come in. 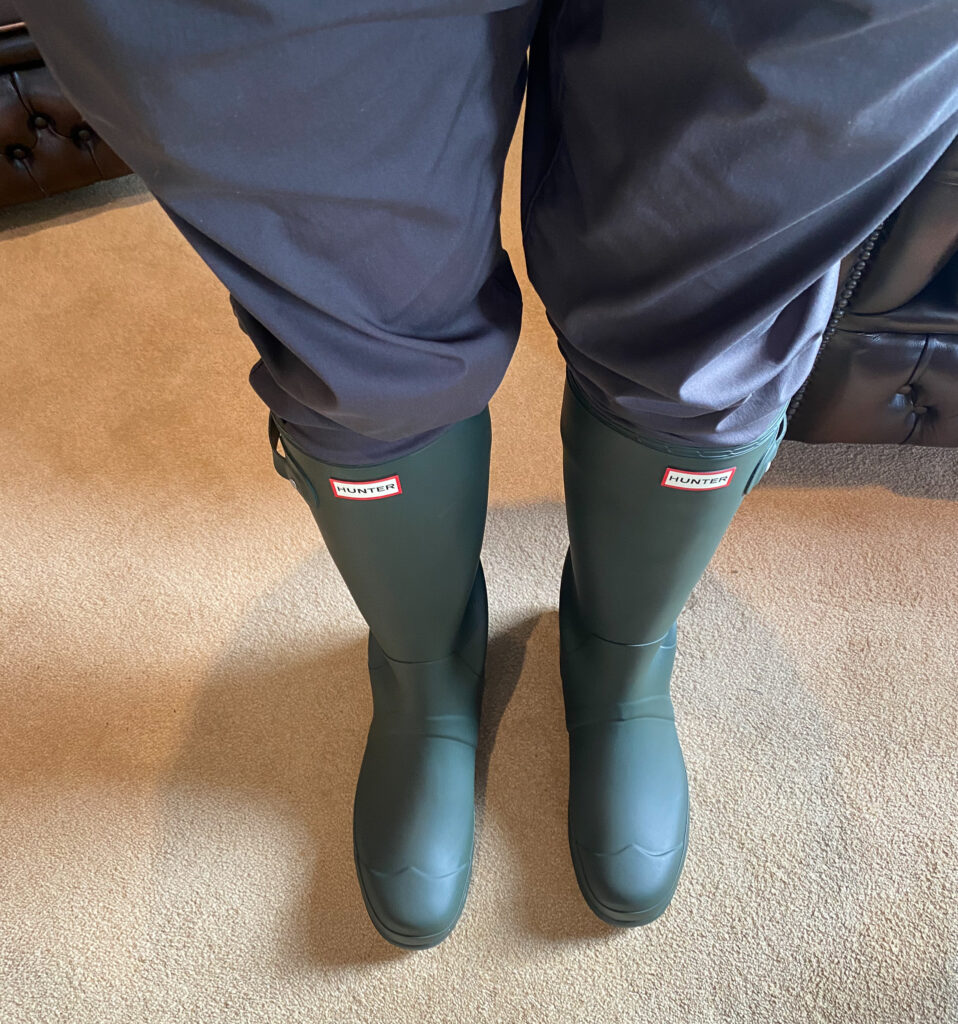 The team was kind enough to have asked for our boot size before departing the States, and this piece of info had come in handy. We were each presented with a pair of Wellie boots from Hunter, and we were going to need them. Oysters cleaned up, the team at the distillery let us know that it was time for us to pay rent. More accurately, it was time for them to pay us rent. I’ve rented my fair share of apartments over the years, so this was a new development for me. Never had a landlord, not even a fictitious one, offered to pay me rent. 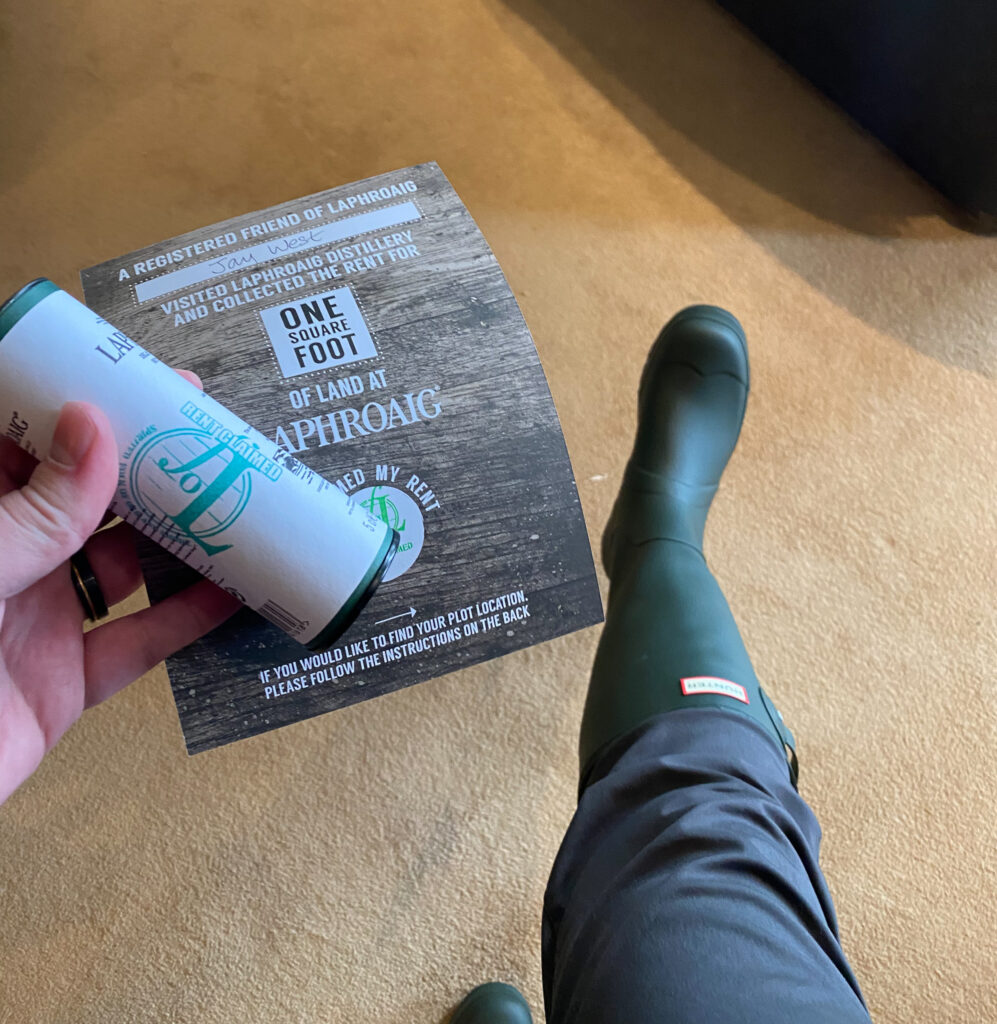 Booted up, we all traipsed just off the distillery property to plant our flags and have a dram. Our field destination was also home to an above average population of sheep, but they saw us coming and cleared out. Simon treated us to another great, traditional, toast and we enjoying some 2015 Cairdeas and shared a moment of friendship as we received our flags and planted them. The wind was picking up, and so was the rain. I mean, it was already windy, but now it was getting very windy. Like, holy shit windy. 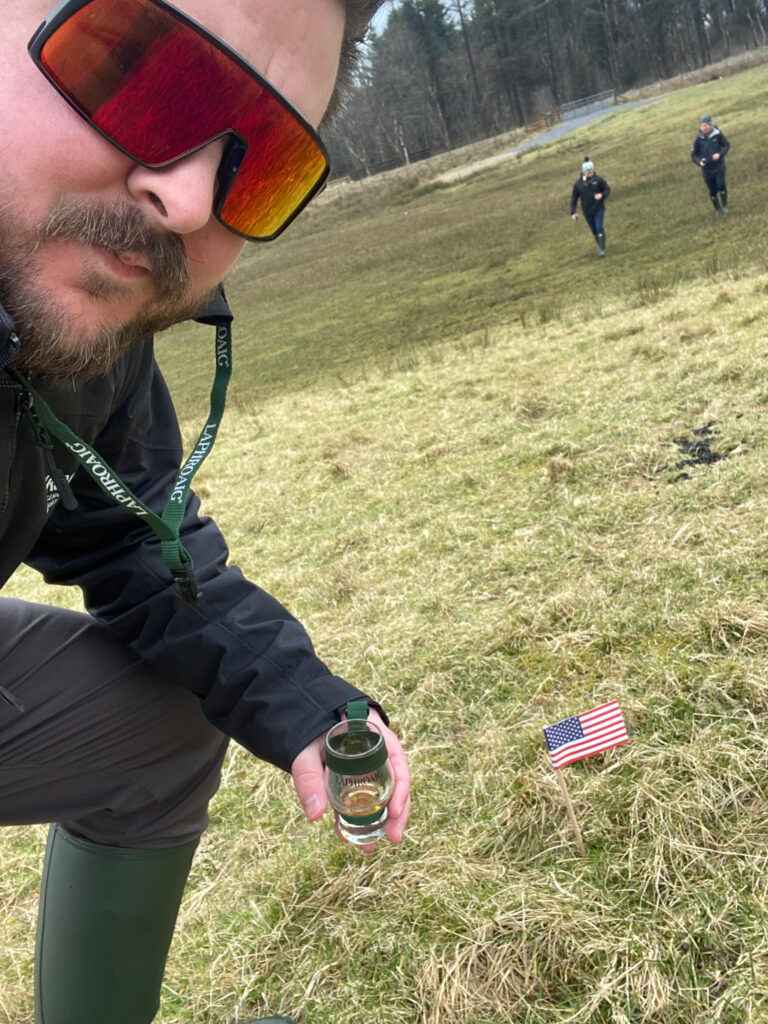 Now, some folks have expressed opinions on my choice of optics. You know, sunglasses. I get it, they aren’t terribly understated. But you know what each of you drive everyday? A car. And your car has a windshield. In fact, people who drive a car without a windshield are often made fun of. In Scotland, it’s nice to have a windshield on your face. Thank you Oakley Sutros, for putting a windshield on my face.

Having eaten enough seafood to no longer fear being blown away, it was time to cut some peat. Initially, I wasn’t convinced that we weren’t being coyly used for some free labor. That was, until we started cutting peat. That’s no easy task, and we did a pretty terrible job.

Backing up: Peat makes up the top several feet of ground in a lot of Islay, and it also holds on to quite a bit of surface water, and floats on more still. As a result, there was no sleeping on the way to the peat fields, because the road actually floats on the peat itself. As a result, the road also moves slightly from time to time. It also doesn’t stay flat. Therefore: we drove on a mile or two of washboard road out to the peat fields. A little more Cairdeas got us through the bumps and soon we arrived. Here the wind was about the fiercest it had been so far, absolutely ripping across the flat plains.

For the record, I knew enough not to project that I’d be any good at peat cutting. That said, I was worse than even I expected. Cutting peat is extremely tough, as you have to perch yourself on jiggly ground and slice down and away from yourself, at just the right angle so you can still lift up the 2 foot long brick you cut at arms length. As all great sports teams know, the 4th time is the charm and I finally found success. I was surprised how physical the process was, and it’s done using fairly straightforward gear. No fancy machines – at least not here. Once cut, you lay out your nice brick to dry a bit, and then once dry it’s ready to rock. You can heat your home, or peat your whiskey with that there brick.

Here’s a quick video of my efforts. Notice the wind. And not a drop spilled of Laphroaig from the neck strap mini-Glen 🙂

Jury is still out on whether or not cutting peat is physically more demanding than chopping wood. We had a drink and debated this, but eventually decided we didn’t want to cut enough peat for a decent enough sample size. We said thanks, braced ourselves against the wind and headed back to the bus. By now, it was late in the afternoon, and we had a dinner to look forward to. After a shower, round of golf, power nap and another round of golf, we met in the lobby to head off for a meal. Simon, Barry and Tracy would join us from Laphroaig, and dinner was set at The Port Charlotte hotel. Since it had been about 6 hours since my last oyster, I was overdue. A meal of halibut, oyster and wine found us recounting the days adventures and kicking back with everyone. The oysters were delicious, but couldn’t touch the spread from earlier in the day.

From there, the evening was late, and while I thought that we were done for the day, Barry was kind enough to let me know that he thought we’d have a drink. I thought we’d had a few of those already that day, but it was Barry. Couldn’t say no. What I didn’t realize, though, is that for the first time on the trip, he didn’t mean another pour of Laphroaig 10 or a round of golf. Barry and the team had other plans. 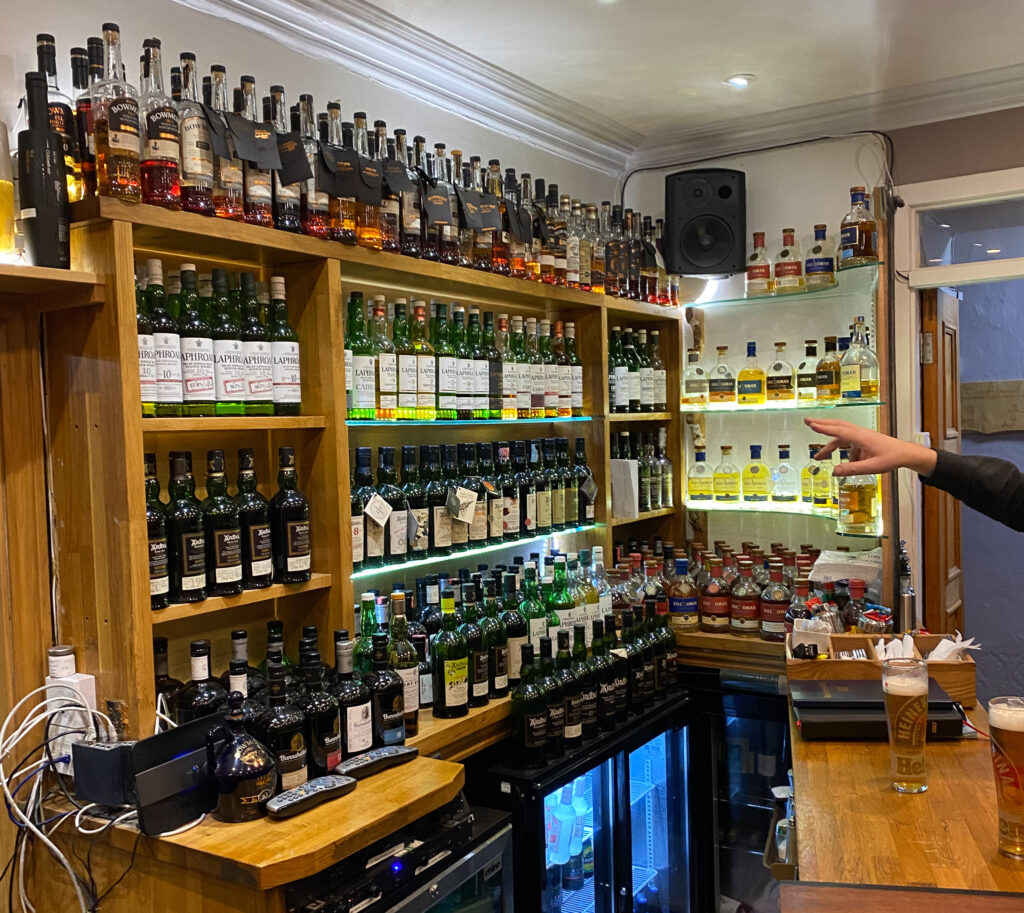 This is Luccis, the Bowmore Hotel bar. There, they have more than 2,300 bottlings. All from Islay. We headed for a particular room, and that room had some Laphroaig in it. It also had some Bowmore, Kilchoman, Ardbeg. Some odds and ends.

I’m strong proponent of responsible consumption. It’s important to take care of your body, understand your limits, and consume spirits within your doctors recommendations. You can read more about that in Part 6, because we had a couple more drinks that evening, and probably one or two more than we should have. These things do happen. 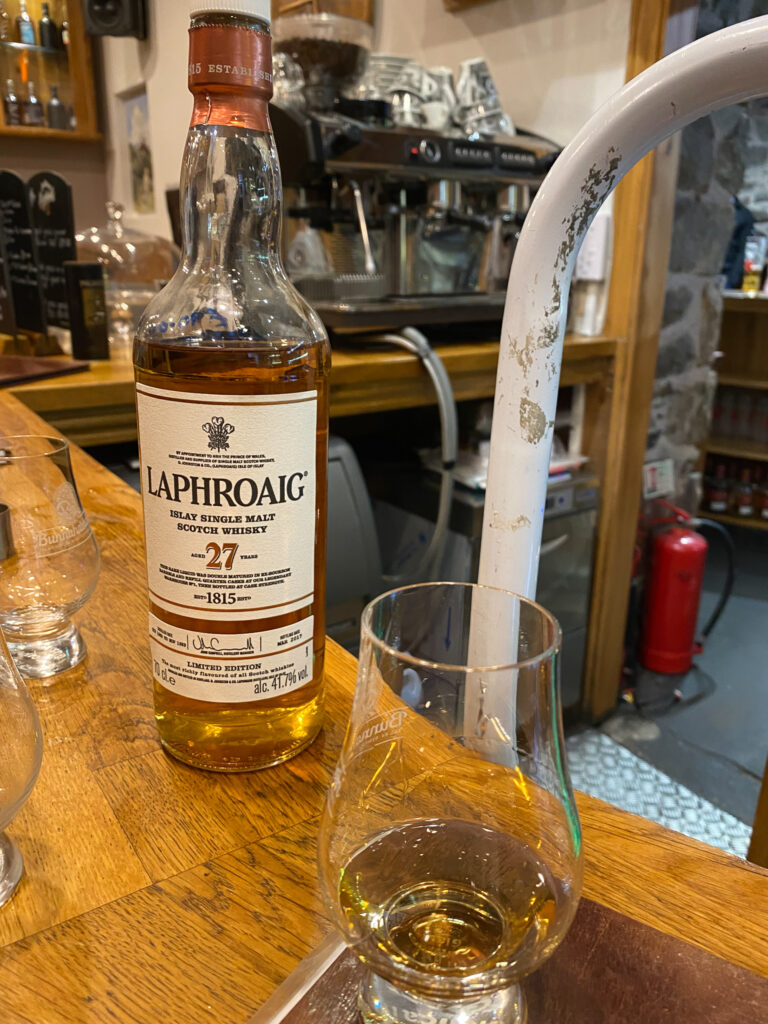 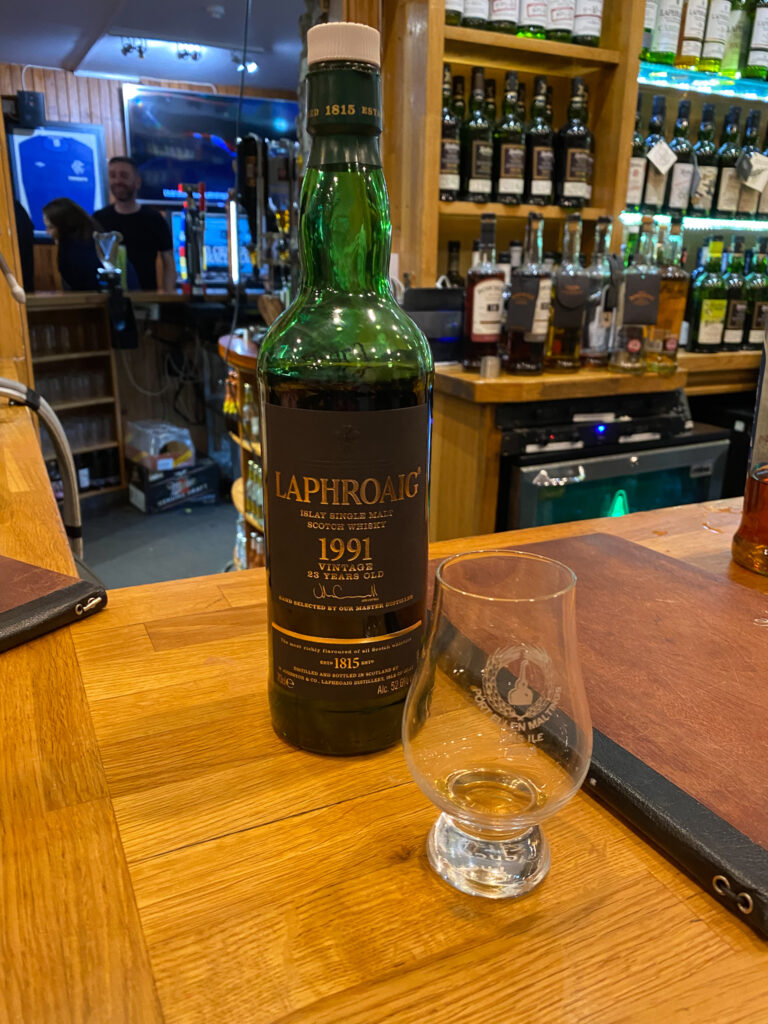 The 25yr wasn’t too bad either. I didn’t have much Ardbeg, although Fermutation was fun to try. Bowmore Aston Martin was pretty sweet. Then I made a discovery. In America, it’s pretty easy to get a snack at a bar. Just a small bite. Some chips or pretzels or something. Not so much in Scotland. I did ask though, and the lady tending bar was very nice. 10 minutes or so she returned with a single serve bag of Lays. I think they were Lays, the bag was yellow. You get it.

Overall, Barry was having just as good a time as the rest of us. At one point, there was a fine tourist there drinking something that wasn’t Laphroaig. The nice man said that he had heard a bit about Laphroaig but didn’t think he’d like it. Barry asked him if he could buy him a Laphroaig, and the man could decide which he liked best. The man agreed. I, even under the influence, thought that Barry would pick out a 10CS or maybe a Cairdeas.

Well, let me tell you, Laphroaig 33yr Ian Hunter release is really pretty nice. Barry agreed. The man agreed. I thought the two of them would just have a pour, but Barry handed one to me, and one to anyone in arms reach. That can’t have been cheap. What a magnificent bouquet, rich with honey, cream, a touch of lemon tart, slate, big marine character and this boisterous charcoal buttercream and pepper with syrupy viscosity. That was the winner of the night, although I do still think about that 1991. It predates me, after all. That’s kinda neat, and was a masterpiece.

Overall, after a couple hours passed, someone slipped in a round of golf (definitely not me) and we piled on the bus to head back to The Machire. What I thought was just dinner became a night for the books, an unforgettable evening sharing drinks with Laphroaig’s newest Distillery Manager, and an overall taste of Islay hospitality. Simon passed out music sheets for some old Islay drinking songs, and we clamored all the way back.

When traveling, I always bring some suitcase snacks. You never know when you might need them. I had a Liquid IV and snacked for a few, because I’d need to be fresh for the morning. We had to narrow in on our single cask selection, after all, and we were thinking toasted thoughts.

To be completed in Part 6.