The Road To Waterford: Part 2

Recently, Jay traveled to Ireland to visit Waterford Distillery. This is his travel log. You can find Part 1 here.

For those of you concerned that I was wasting precious time in Ireland in church, fear not. It’s a bit tongue in cheek, as Waterford owns a massive facility they call The Cathedral.

The Cathedral is their grain storage, meticulously constructed to keep grain from different farms separate. This is where farmers bring their barley after harvest, and where it awaits malting and processing and shipment to the Waterford Distillery. It was fascinating to see how much engineering went into something this massive, as there were more than 25 bays in the Cathedral – many full, some empty, and some in a state of flux between full and slow depletion as malting was underway. 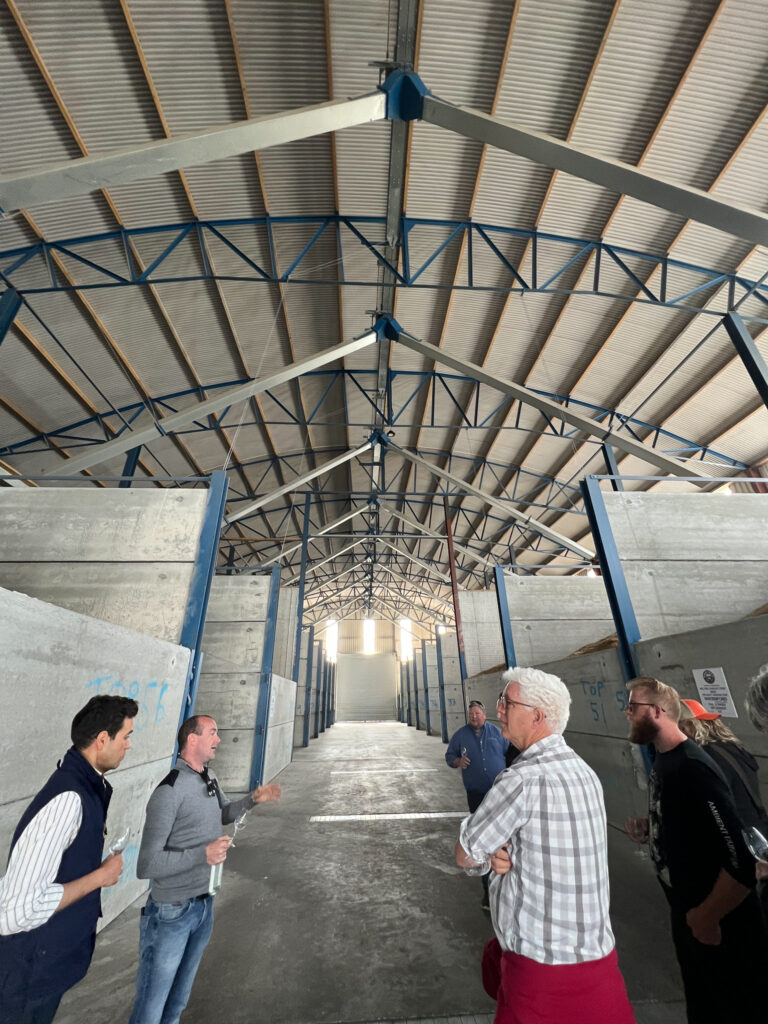 Each of these bays could hold tons and tons of barley, and they were clearly marked with the source farm. The team at Waterford would taste through and select what to malt and when, with the ultimate task of tracking barley all the way through to distillation and eventually barreling and blending. 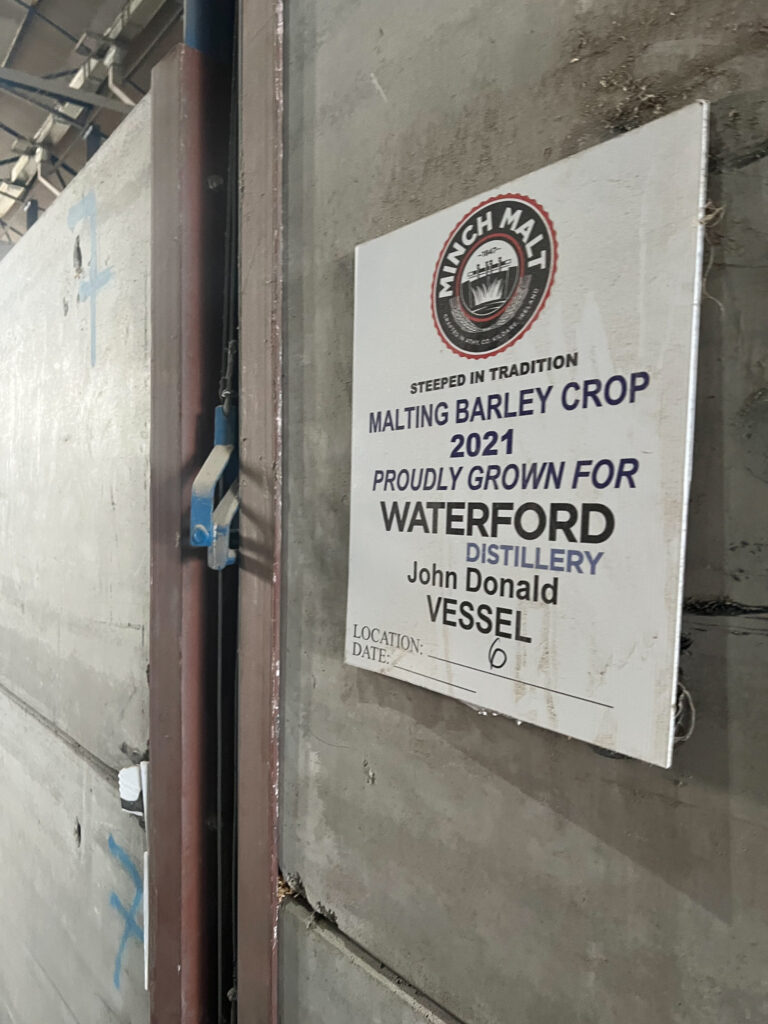 Overall, the property was staggering, and an interesting departure from a sight that I had seen many times and many other places: one gigantic grain hold for each type of grain. The strong adherence to segregation and tracking bucks many trends I’ve seen in other distilleries and it’s a clear departure from the status quo: which required their own new construction to make such a facility happen. This facility has already been rendered too small given the distillery’s growth, and a second facility has already been constructed next to this one. Wild stuff.  We tasted kernels from several different farms, more noticeably different than I expected.

Our every question about barley satisfied, we hopped back in the bus. We’d be heading for a stop at their cooperage, and we had another farm to stop by. It was only about 25 minutes down the road, and we wouldn’t be staying long, but it was a beautiful day in Ireland and gazing at barley was surprisingly peaceful. 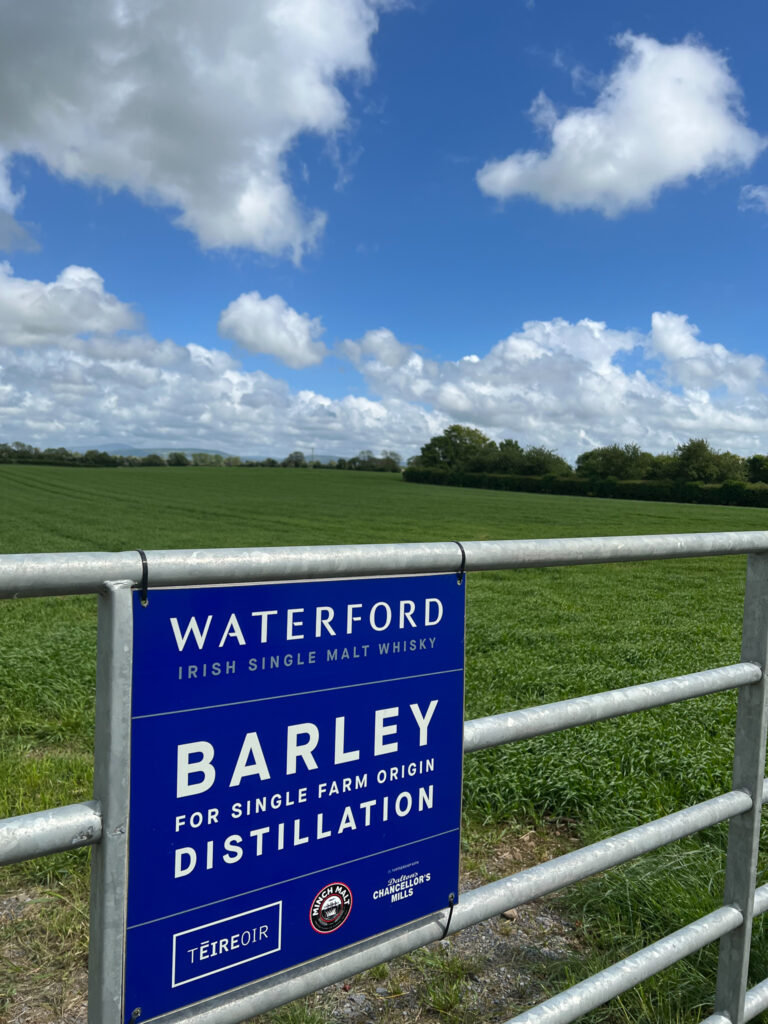 The barley here was growing nicely as well. This particular farmer hadn’t moved 100% to biodynamic methods, and for the record it’s not a required element of being a Waterford partnered farmer, but their fields seemed happy to see the sun just as we were. We gazed a bit and took in the warm sun, light breeze and fresh air. I was amazed how blue the sky was in the countryside and snapped a couple pictures before heading off to cooperage. One note in the image below: hedges are very popular, both to border fields and also bisect them as it provides the various birds and critters that feed on field pests a safe home to flourish in, while also giving homes to pollinators and other elements of a healthy ecosystem. 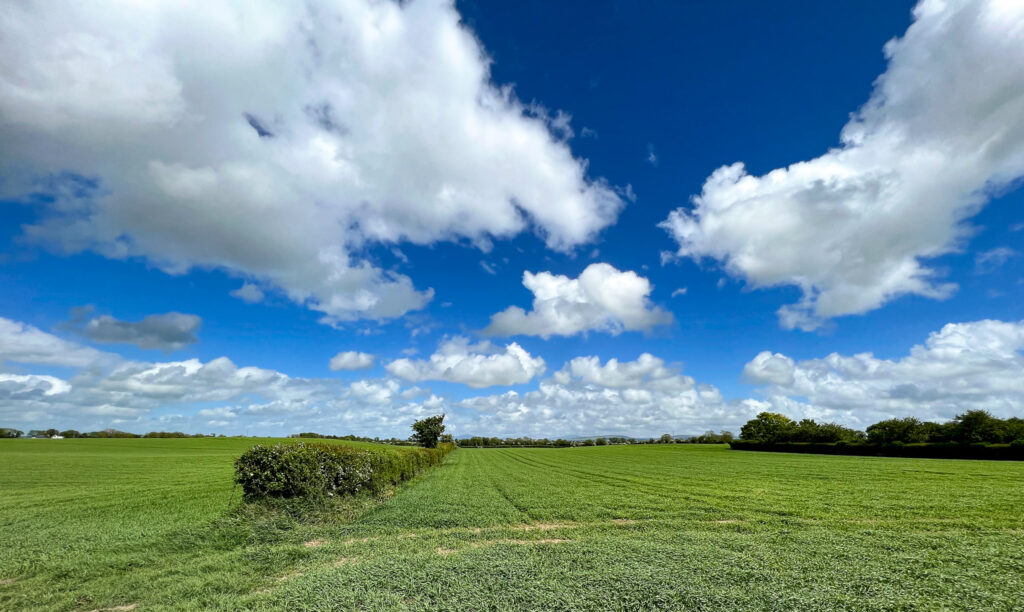 No filter, as the kids would say.

We piled back in the bus for a longer leg of driving as the cooperage was quite close to our eventual destination: Waterford, Ireland and the Waterford Distillery. Due to our traveling during COVID, one of my companions and I would need to get a covid test mid tour at the cooperage so we could travel in the morning and make our way back to the states. When we arrived at the cooperage, it was hard not to notice that there were not just a few barrels. There were a ton of barrels, and it was an early indicator of Waterford’s true size. 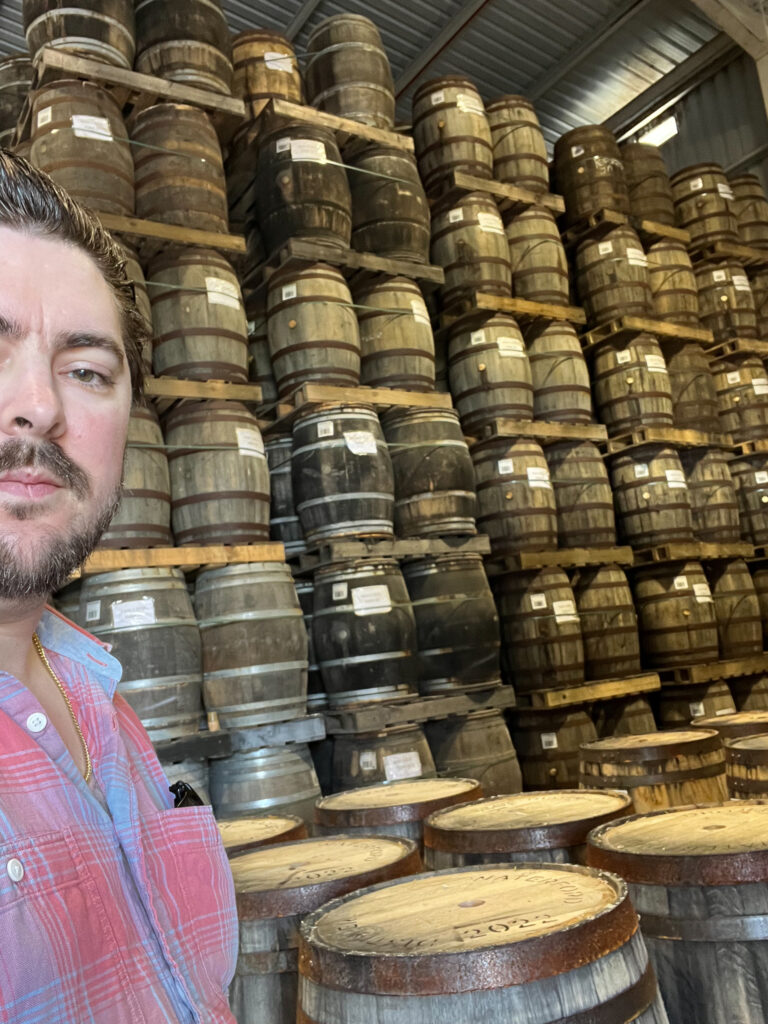 The palletized racks of barrels extended back hundreds of feet, and this was just one of several facilities. This was the filling facility, and it was a treat to watch actual filling underway as we walked through the facility. A blend of red wine barrels, virgin oak casks and American ex-bourbon casks make up the large percentage of Waterford’s filling. 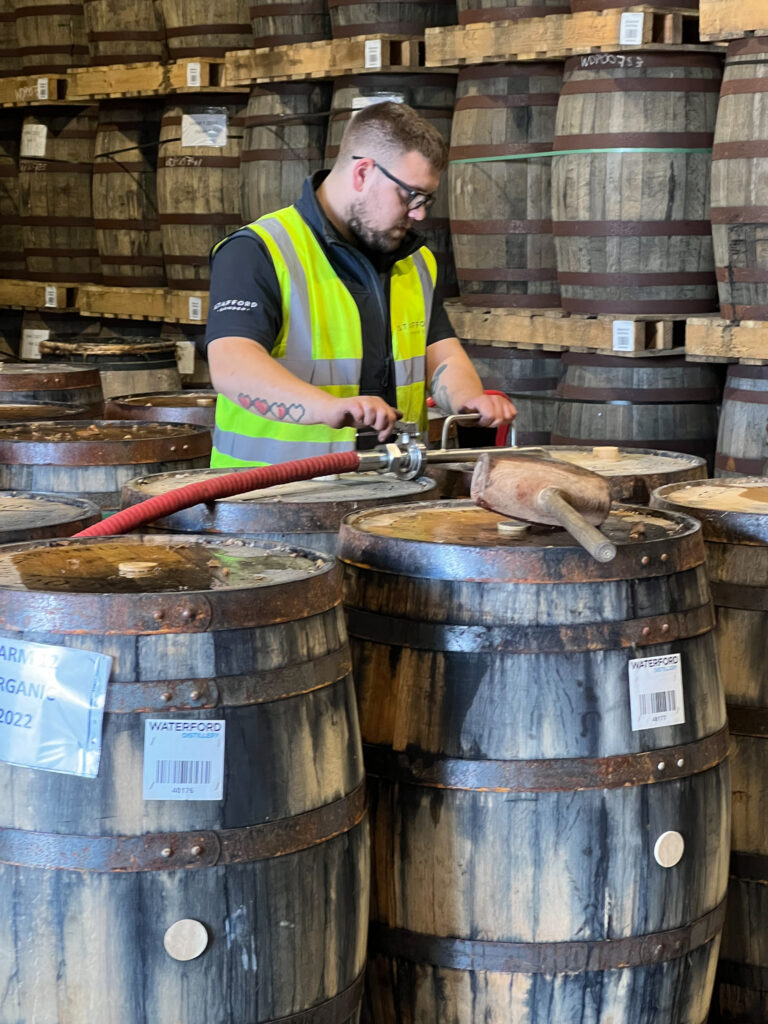 A burning question I had remained and grew the more we saw of the cooperage. With the emphasis on single farms and their impact, what’s the point in anything other than single barrel or single farm releases? Why mature in a variety of cask types? I’d get pieces of this answer through the rest of the day, but the immediate point at hand was that proving whiskey has terroir isn’t a single purpose goal. Understanding how every farm affects the overall flavor of the distillate is key: both for targeted single farm releases, and blending on the whole. The impact of certain cask types on each farm’s barley distillate combined with how each origin’s whiskey works, whether complimentary or negatively with each other is a big piece of the complexity puzzle for the Waterford team. They also need to stay on top of any quality wrinkles, which can crop up farm to farm, harvest to harvest. I was starting to understand why the Waterford team was so large, but we were just getting started.

I took a brief detour from the sight seeing as I needed to get a COVID test to prepare for my return to the United States in the morning. Thankfully, negative. I headed to the hotel to freshen up after a long day of seeing this and that, and we were to meet up for dinner shortly. I’ll admit that the town of Waterford was beautiful, whether you were there to see a distillery or not, and there was a really fascinating contrast of modern architecture and industry along with a number of historical points along a wide river that ran alongside town.

After reuniting with our companions that would have time in the morning for their own tests, we set out for Waterford Distillery. The town wasn’t terribly large, it was perhaps a 10 minute walk from the distillery to the hotel, and that included stopping to look at some art here or a mural there. Very easy way. 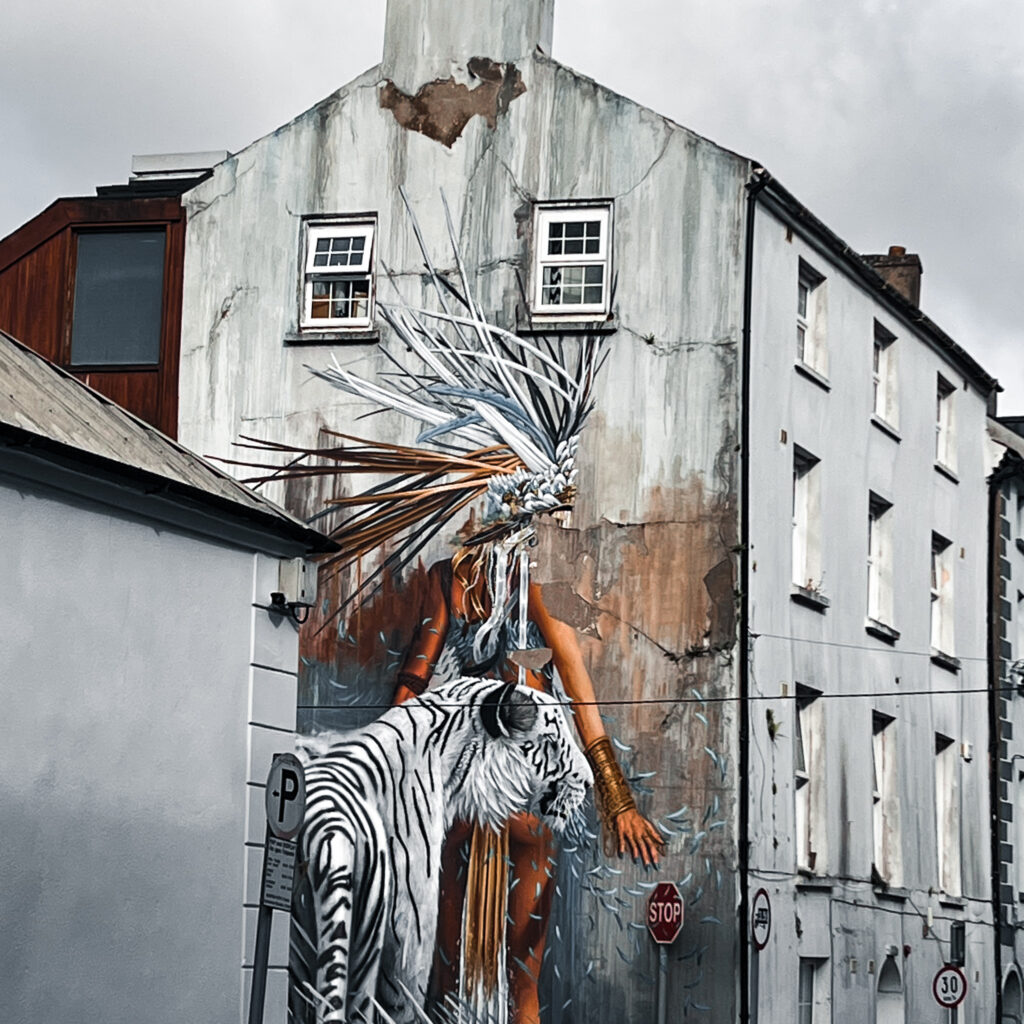 The local art was incredible.

We were met by Ned and team at the distillery, as well as the heads of production and blending. The distilling facility used to be a malt liquor brewery, but it went under several years prior. 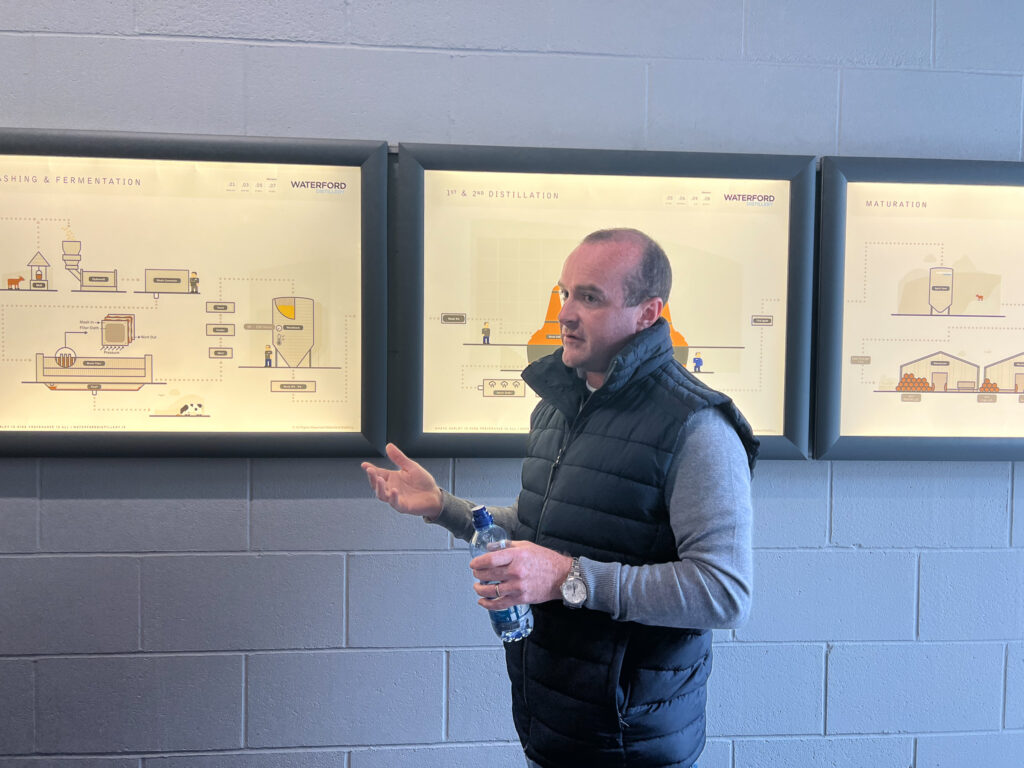 It was the perfect acquisition for Reynier and the Waterford team, who quickly got to work retrofitting it for modern production distillation runs, while preserving as much of the staff and equipment as possible. As we’d see later, very little was wasted – there are a block of fermenters not yet needed, but they came in the sale all the same.

Inside the distillery are a pair of stills, freshly replaced or in the process of replacement as they’ve come to end of life from their earlier life. 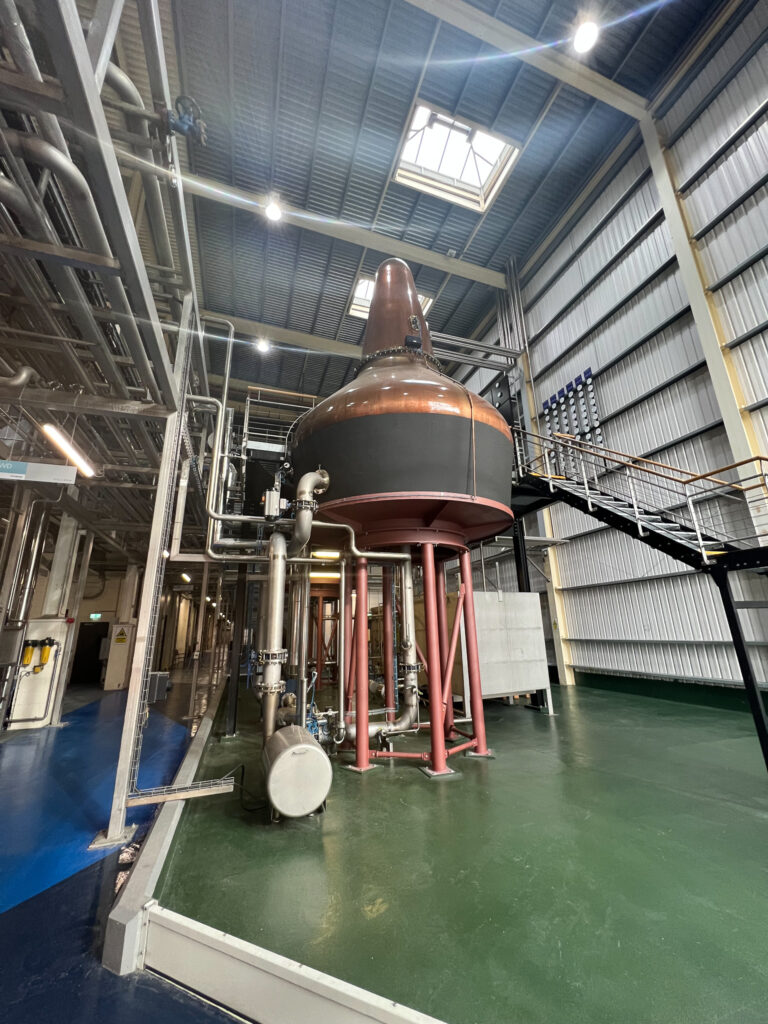 A neat wall installation registers all of the farms that are currently providing barley for distillation runs, and an even larger map that shows all active  farming partners. 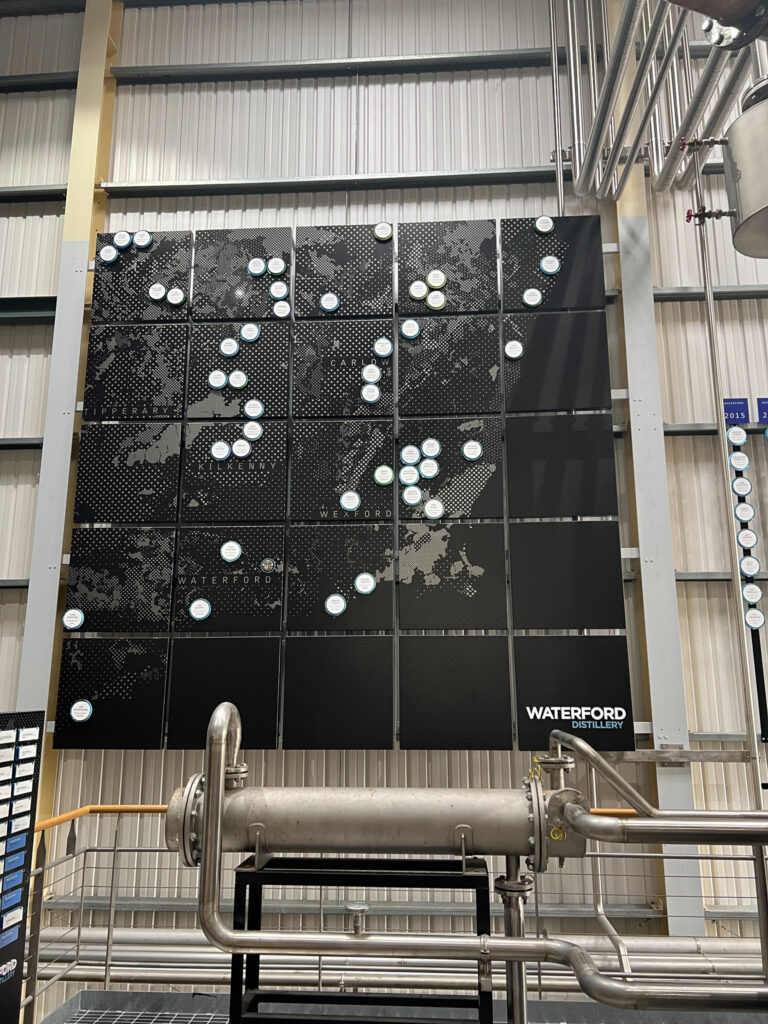 I asked and they said this wasn’t classified.

The facility was massive, and beautifully placed along the water. It’s clear they’re setup for a long future and the promise of scalability as the whiskey takes off. From here we continued to take a look here and there, from top to bottom. Not only was the facility huge in a 2 dimensional sense, it was also staggeringly tall, with massive domed ceilings in a modern design. From the outside you wonder if it could be as tall as it looks, and the inside informs you: of course it is. 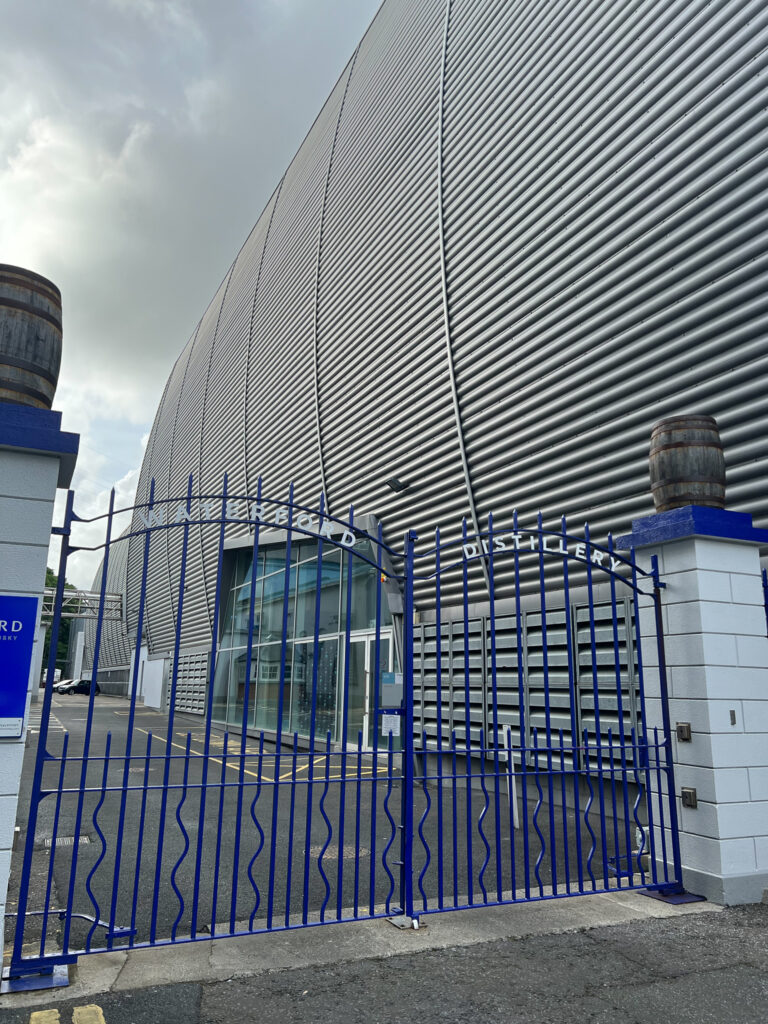 I couldn’t get the top in frame.

From the production floor (actively distilling, I might add – very cool to see in progress) we moved to the tasting lab. The Waterford team manages a full tasting lab and team. Their job is to not provide tasting notes, but to appraise the quality of every single distillation run from every single farm. They’re intensely focused on identifying flaws found in fermentation, distillation and the quality of the barley as its coming in. Interestingly enough, their attention to detail in this lab borders on obsessive. Every batch is checked and re-checked and the answers of every panelist cross-referenced against the others for every test. It would be easy to understate the absolute spectacle of what this team did every single day, but it was without a doubt the tipping point for me that day.

The question of Terroir was still unanswered (we’ll get to that in Part 3) I had to admit that I was impressed with the sheer laboratory setup within Waterford. The room they operate in is vacuum sealed, with negative pressure and heavy filtration. Tasters eat after the morning tasting session (the only session, to avoid palate contamination from meals) and even during COVID came to the facility one by one, so as to not interact with each other, but also not give up their sealed, sanitized, uncontaminated tasting mecca. I briefly wondered how I get one of these in my house. Damn cool.

I’m getting a bit long winded here, but the shiny guts of Waterford distillery reminded me of a distillers Willy Wonka Factory. After a session learning about their analysis and flaw detection pursuits, Ned popped his head in the door and mentioned that Mark had some whiskey he wanted to show us. Something about their first casks, and the archives. I didn’t waste anytime getting a move on.