The Road To Waterford: Part 3

Recently, Jay traveled to Ireland to visit Waterford Distillery. This is his travel log. You can find Part 1 here and part 2 here.

Just as someone hollered that it was, once again, whiskey drinking time, I snapped a quick picture on our way out of the tasting lab. A lot of companies will the concepts they hope to use to advertise their products into existence  through the form of repetitive campaigns put forth before the public. I was impressed that not only were Waterford anecdotally trying to appraise the value and diversity of flavor in barley relative to the farm and farming methods, they were also committed to doing it scientifically. The team has been working with a number of scientists to take an analytical look at the concept of terroir, and I thought that was pretty sweet. 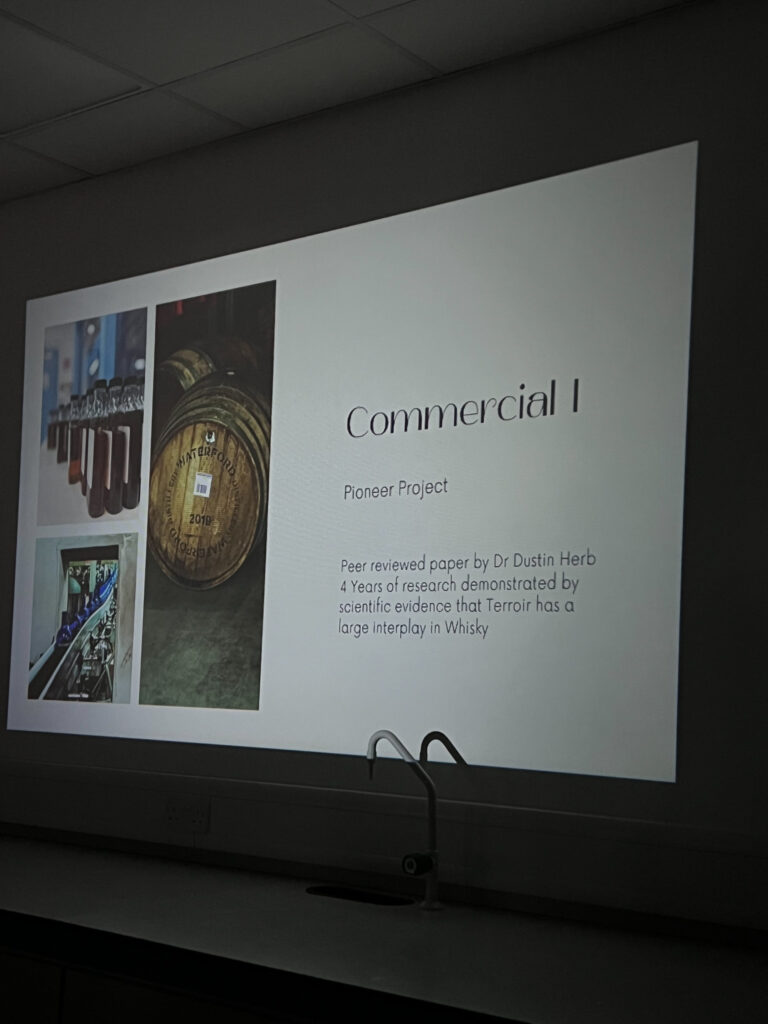 Alright, back to drinking whiskey. The invitation sent forth to us was an opportunity to enjoy some pours of Waterford over the years. They keep an archival room of sorts – one quarter cask aging of liquid from each farm and distiller at a time. Some are old, some are new, but each are maturing in the exact same sort of cask and biding their time in the quiet corner of Waterford distillery. 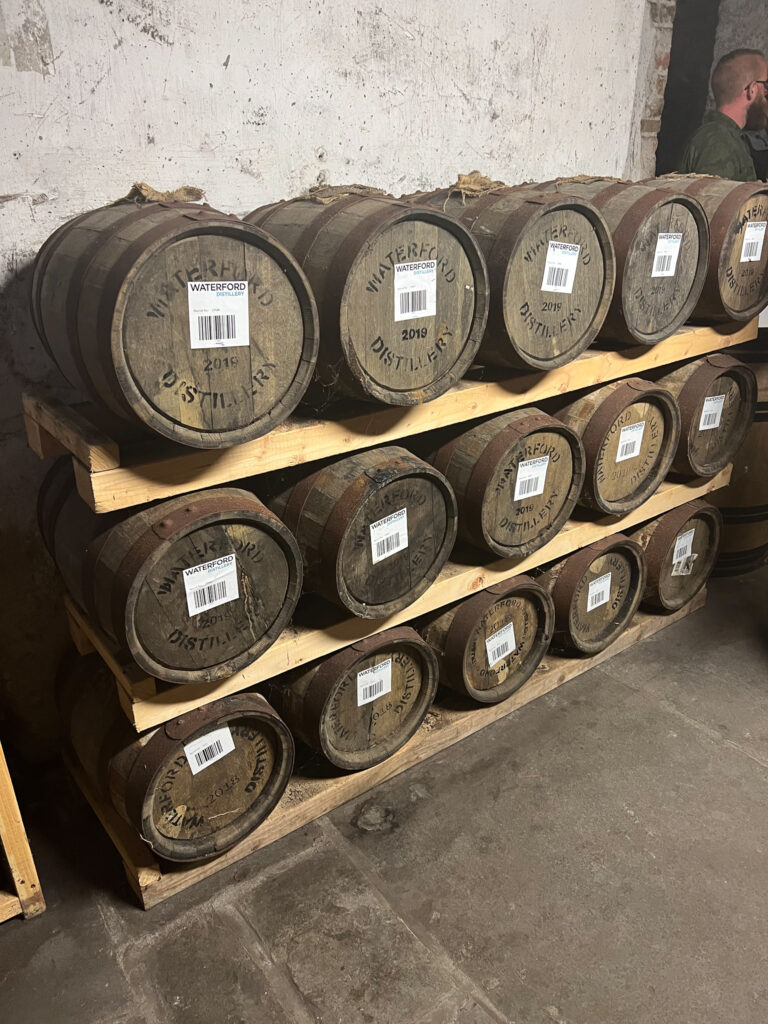 There had to have been one hundred and fifty of these small quarter casks, racked efficiently all through the room. Since we couldn’t try them all (although I suspect we’d have given it a go if it weren’t for our dinner plans later in the night) we had time to select a few. We picked a duet of casks, side by side, that came from a pair of farming sisters, each with their own land.

We also tried some of their earlier casked whiskey, back from the distillery’s first production runs. We tried a cask owned by a Prince, some that were privately selected by clients who’s names we were sworn to secrecy and finally, a rack of experimental casks, made from unique woods from unique locales. The Andean oak was fascinating. 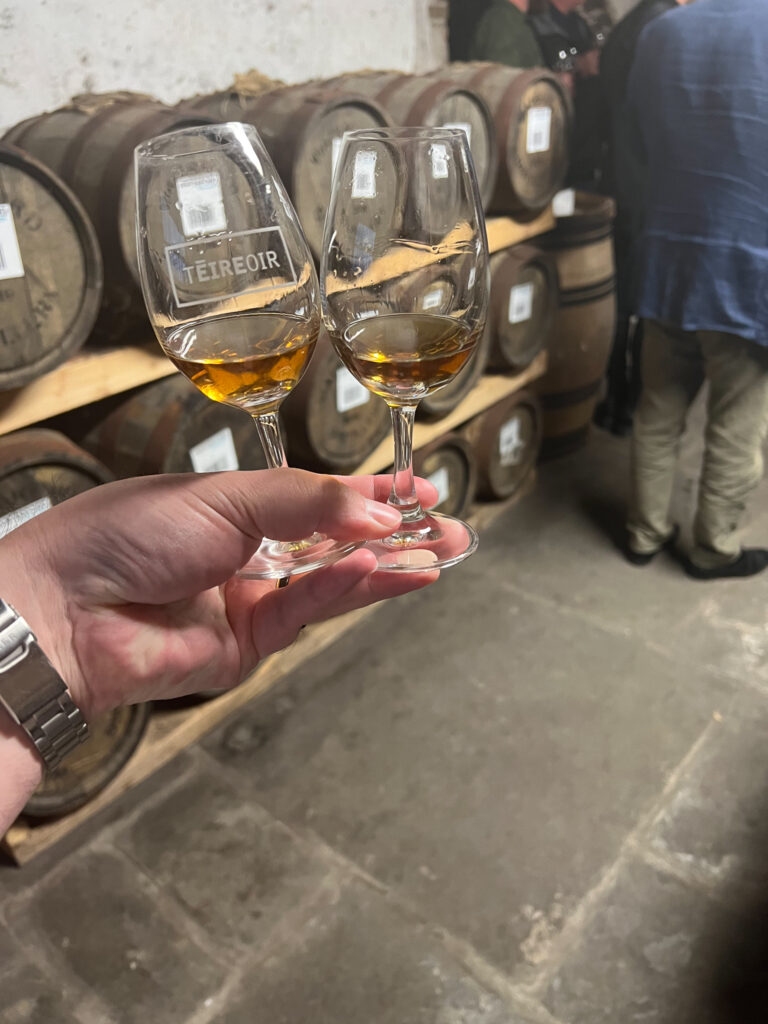 Sister casks, in more ways than one. Sampling through each cask was a really interesting less in flavor. Thanks to my work, both writing here for Whiskey Raiders and covering hundreds of whiskeys each year, I also sample quite a few whiskeys straight from the barrel as a part of my pursuits running a colossal single barrel program.

Typically when I’m working through a distillery’s stocks, there are nuances cask to cask. I was surprised how deeply different the sister casks were, farmed just a mile or so apart and using similar, but not identical barley. Night and day, with one cask presenting bold honeycomb and citrus and the other prominently shouting slate and spirit-y apple cider vinegar.

This was the real experience for me at Waterford, having started the day wrestling a Jack Russell Terrier for a stick in a field of barley, through the soil, grains, malting, cooperage and distillery itself. I could see how blending these types of stocks would take a significant effort, with so many pieces showing so differently, the name of the game wasn’t to blend out inconsistent barrels like most bourbon, or even macro-blend sized projects at a conventional distillery may look like. The profile was destined, and designed, to change between distillation runs. Blending so many unique flavor profiles was realized to be a staggering task – one I respect greatly.

We tasted, and tasted some more. We tried great casks, bad casks, unique casks: the works. I also thought it was humorous that the team held onto a cask they thought was terrible, just hoping someday it may turn to greatness. That day was not our day, and we all had a laugh over the sour faces of guests and crew of Waterford alike. 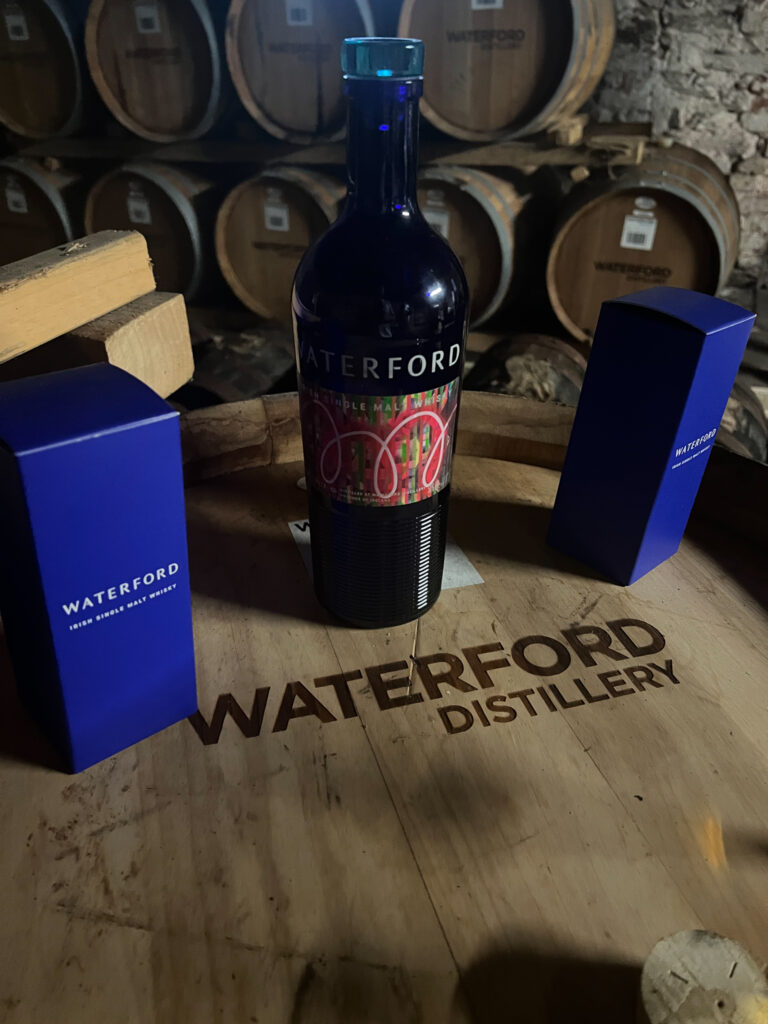 Now an hour or so past our declared dinner time, we figured it was best to hurry on our way and close out the day. We’d done a lot of, well, just about everything. Walking, talking, standing, sitting, sipping and in my case, grabbing pictures left and right. We’d make our way downtown in the small riverside city for dinner, and then a nighttime stroll through the city’s historical landmarks before calling the trip a wrap. 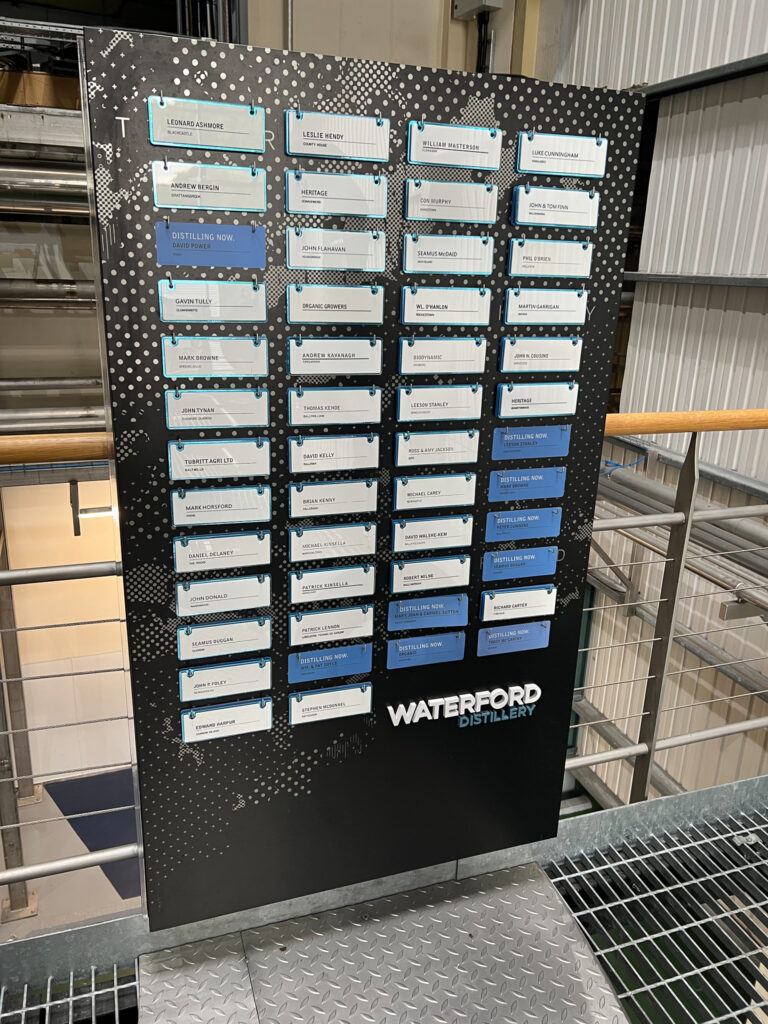 On the way out, we went by a small directory of farms and farmers standing free in the distillery. I liked the attention to detail that Waterford paid to these aspects. Everywhere you looked, there was an ode or reference or picture or posted celebrating their farmers and barley growers. I’d never seen anything like it in another distillery around.

We scurried through a small, unassuming door in the back of the distillery and, to our surprise, it ejected us straight into the main road. Handy. Mark would lead the way to the restaurant, and it was up to each of us to keep up.

A brisk walk is always in style, as far as I’m concerned, and there would be no doubts as to everyone’s appetite when we arrived. I enjoyed short rib and some more local flavor as we sat and spoke and looked back on our time at the distillery.

Following our meal, Mark was kind enough to walk us around the city, showing us various murals, river walk junctions, some historical ships and a general look at the distillery’s neighbors, friends and adopted family found in Waterford, Ireland. He offered to stop here and there for another pint, but we were stuffed from dinner and many of us would be up in a few hours anyways to make our journey home. 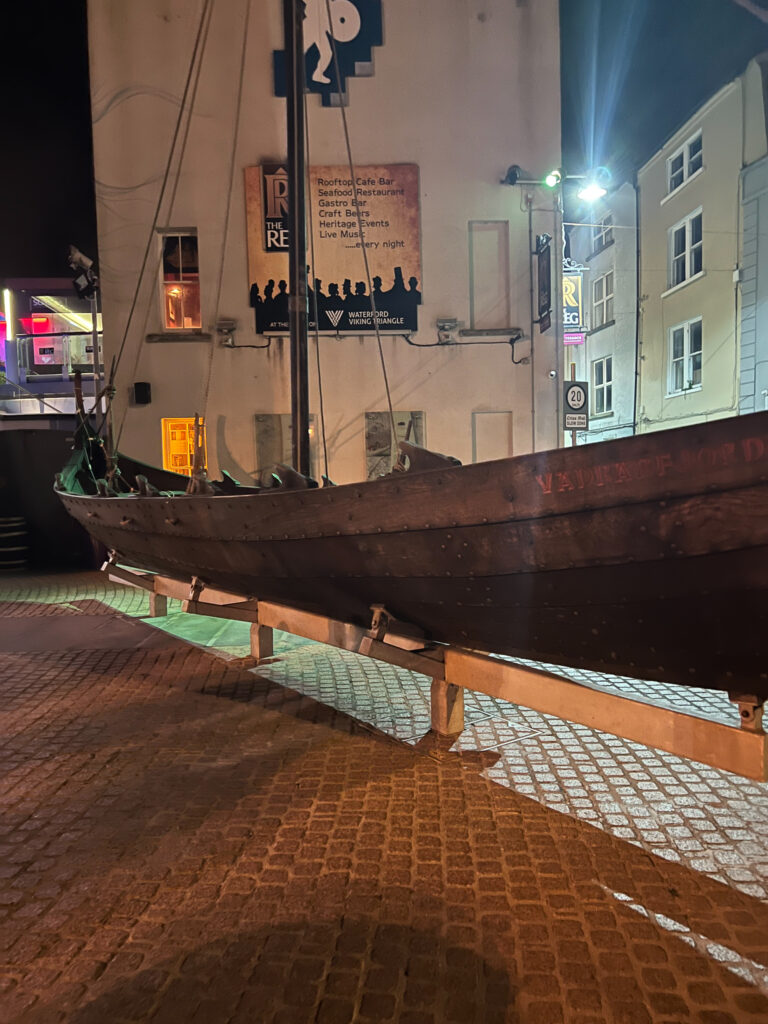 The kindness of the people in town, from random passersby to our hosts and servers at the restaurant, was heartwarming. It was a cool city, one I’d never have found myself in if not for the distillery and our trip.

Back at the hotel, I started packing for my early departure the next day. We’d be riding with a kind volunteer (I believe it was more likely he’d been volun-told to take us to the airport in the morning) from Waterford back to the airport, about a 2 hour long drive. Our hotel was kind enough to offer us a breakfast for the road in the morning, and I wished to myself that American hotels would take note. 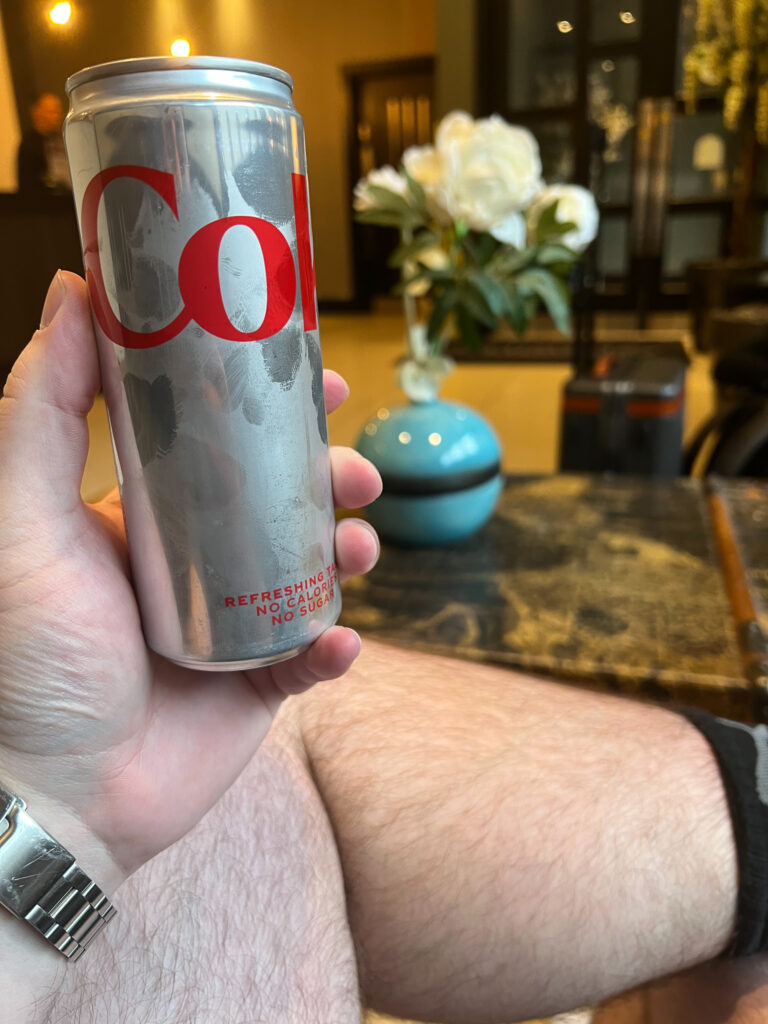 Up early, I was all packed and ready to head home. I enjoyed a cold diet coke in the lobby while waiting for Wayne, another of our party, to join me. I’ve since kicked the Diet Coke habit, but this spring and summer were spent across many timezones, and a good caffeine kick never seemed like a bad idea. We rode the 2 hours to the airport, and I settled into the bump and grind of making my way back home.

Notably, the Dublin airport is all about Jameson. Most of Ireland is, once you get outside of Waterford. They pinched no pennies inside the airport, and there was quite an impressive storefront available for those who may be interested. I wasn’t sure if it was meant to mimic a bird or an angel, but it was cool either way. 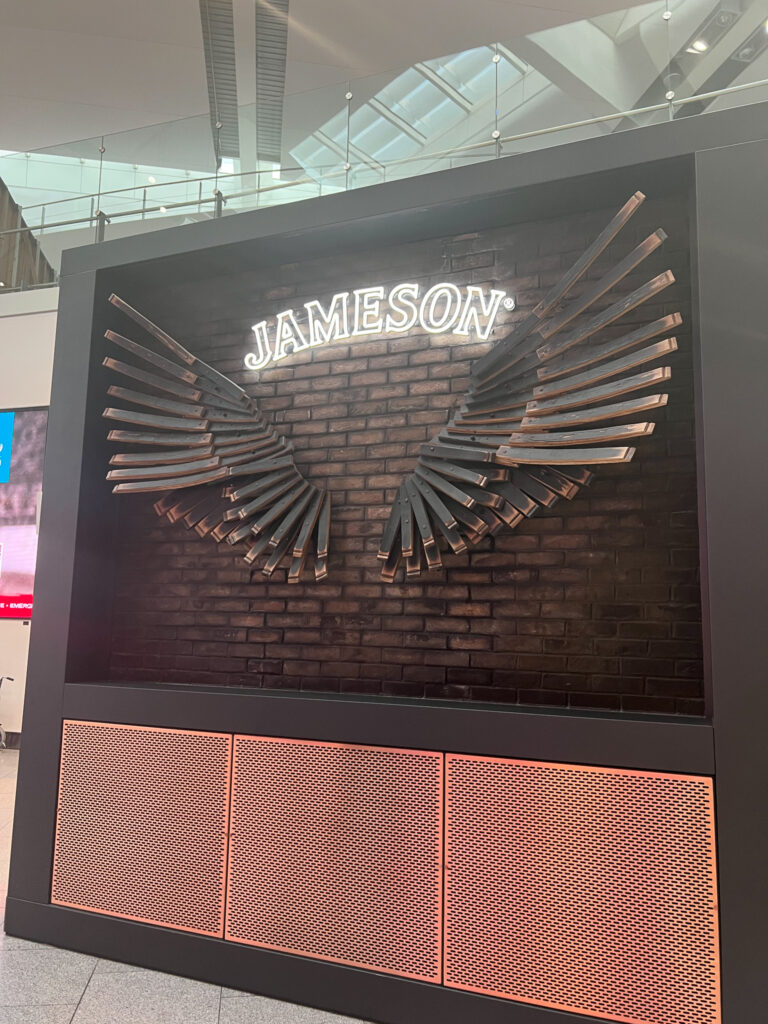 The airport itself was modern and full of art, installations and unique retail experiences. I know most airports are, these days, but it’s always an entertaining and insightful way to remember my travels. 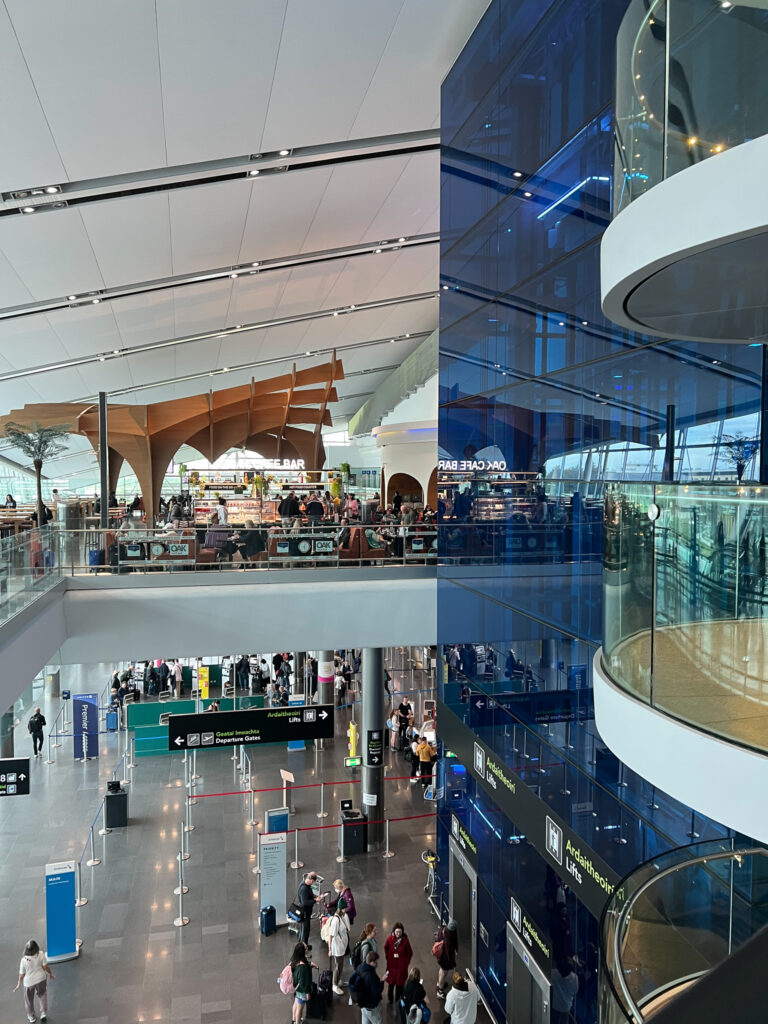 Ireland as a whole seemed to love glass, whether matte or shiny, colored or uncolored. All in all, the country was beautiful, and I loved seeing the local flair as we moved from town to town, city to city. I made my way through ticketing and security, and handed my suitcase off for checking onto the plane. Little did I know that it would be the last time I saw it for quite some time…