The Road To Waterford | Whiskey Raiders

The Road To Waterford

2022 has been a busy year. There have been ups, there have been downs, and there have been a great number of things in between. That said, with each year that passes and the more opportunities make themselves available in the world of spirits to me, I’ve learned that everything fades away except for memories, and memories of time spent at distilleries have quickly become one of my favorite things.

I wanted to start this piece with an uplifting sentiment, because this spring, I had the privilege and opportunity to visit Waterford Distillery in Ireland. This trip started with my clutching various toilets in my home in Madison, WI, because I came down with Norovirus 48 hours before I was supposed to take off for Ireland. I was hoping we wouldn’t dwell on that, hence the uplifting intro. I wasn’t sure the circumstance would end well for me, with travel so imminently close, but I held on for dear life. Porcelain is slippery. I won’t sum up noro virus, particularly because it’s a memory I’m actively working to repress but if you’ve been wondering if it’s something worth avoiding, I would say yes. A million times yes.

Thankfully though, it moves quick. I spoke with my doctor the morning of my departure (!!) and he cleared me for travel. In fact, he told me to suck it up, and he’d be disappointed if I didn’t go. Imagine your physician looking you in the eye and telling you to that. I think he just wanted pictures.

I didn’t feel great, but it’d be a long flight, and I figured with some sleep and a snack, I’d wake up in Ireland feeling just fine. After my spring experience at Laphroaig (you can read about it here) I was determined to make it to Ireland so long as the doctors said “go”. With his challenging endorsement, I was off! I’d be flying to Chicago first, then taking off for the long trip to Dublin. Set to take off at 9pm for Dublin, I spent an hour or so in Chicago hoping to find a meal. My snack plan would need to wait on hold, as my appetite hadn’t yet returned.

I boarded my flight for Dublin, and got comfortable. I was in a row of nice folks, and thankfully they all expressed some interest in sleeping as well. Ten or so hours later, I was in Dublin.

A fun fact is that I had been in Kentucky two weeks before that, and Florida the weekend before leaving for Dublin. In Kentucky, I found a great little pet boutique who sold a line of clothes I enjoyed, called The Gentle Pit. Proceeds from apparel sales go to finding adoptable pitbulls loving homes. I didn’t think twice about wearing my newly purchased tee to Ireland, but arrived and recalled the restricted status of pitbulls in the country. That explained a funny look or two I got when collecting my baggage, and I made it a point to change when I got to my hotel. 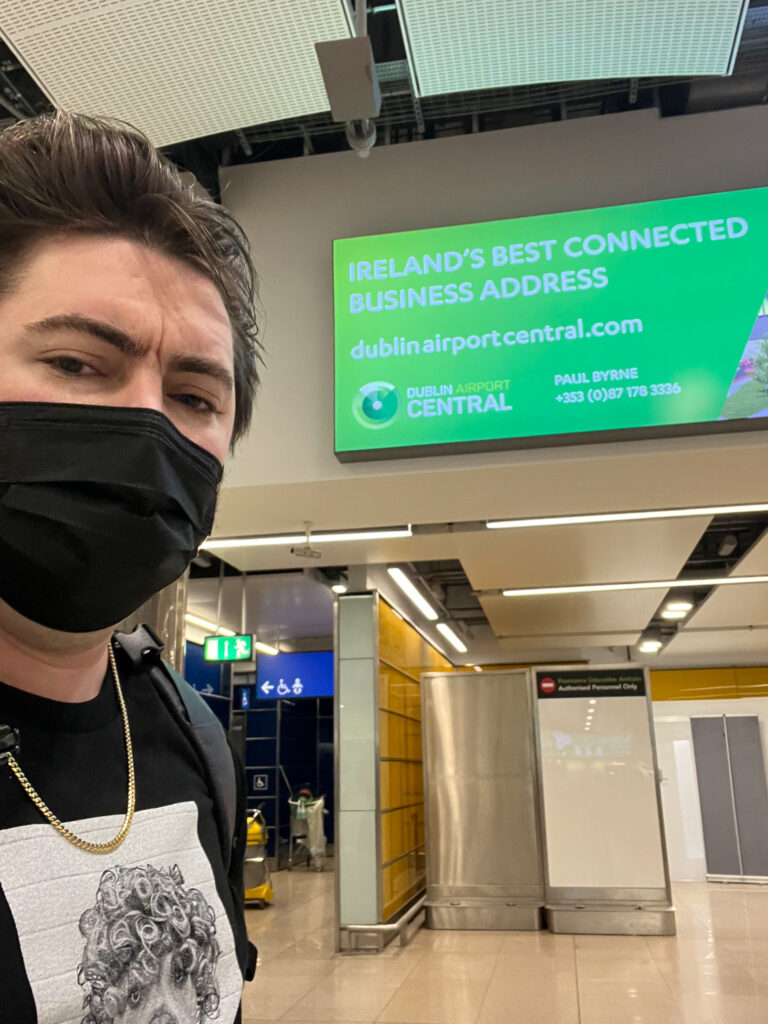 The flight from Chicago to Dublin was an overnighter. I arrived about 10 am and would plan to be to the hotel by 1130 or so. We had our first day activities planned to start in the afternoon: drinks with Mark Reynier. This would be a quick trip. I’d spend roughly 50 hours or so in the country of Ireland. If that’s not the definition of productivity, I don’t know what is! I got to the hotel, freshened up, realized I had forgotten all of my international power adapters, but remembered the abbreviated duration of the trip. I had a power bank that would last me that long. My laptop could power through as well. Thank you, science.

A couple hours later, I met up with Wayne Curtis (of The Daily Beast, etc), Mark Gillespie (of WhiskyCast), Betsy Andrews (of Seven50 Daily, etc) and the rest of our party in the hotel lobby. Mark Reynier was shortly to follow.

Many folks know of Mark Reynier, at the very least. His time at Bruichladdich made him familiar to many, his departure made him familiar to many more, and his undertaking to start Waterford distillery in Ireland put him on the proverbial map for many more yet. Mark is a fast talker, but an even faster walker. I welcomed this, since I was still feeling about 85%, and needed some fresh air. He welcomed us to join him for a pint across town, and then we’d sit for dinner and get acquainted. He wasn’t lying, it was certainly a distance, but we made it in excellent time due to his industrious pace. He’s not afraid to cover serious ground in a moments notice when a pint is on the line. I already liked him.

Dublin is a beautiful city. It was my first time visiting, and I enjoyed our brisk stroll across the city, crossing bridges and galleries, rivers and city blocks each with unique shops and industries. The real prize though, was the cozy rock pub where we found our first taste of Ireland. My love for a crisp Guinness is hard to overstate, and I was thankful my first taste in Ireland would be a cold pint. 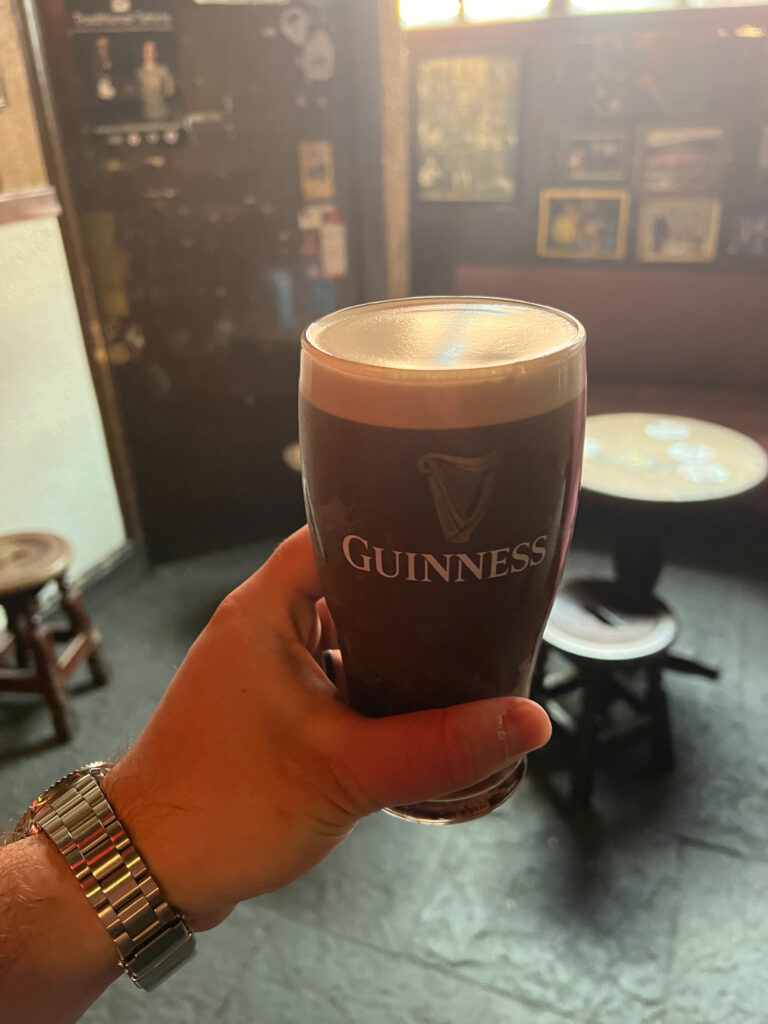 My stomach still wasn’t back to normal, but the Irish draft sat easy and was a great comfort as we sat and chatted. Mark caught us up on the current events in Ireland, gave us some briefing on what we’d be seeing, and polled us for our thoughts on what it meant to make an Irish whiskey. We also mused on why Sazerac hadn’t yet made a move into the space, which turned out to be great foreshadowing. We had this conversation in May, and it turned out that Sazerac would announce their moves later that summer. Well timed.

We moved from pints to dinner, taking a walk down the road to one of Mark’s favorite tapas style restaurants. Here we enjoyed some favorite wines, learned more about the founding principles of terroir and Waterford’s frankly obsessive pursuit of understanding it, and had our first pour from the distillery.

When asked if Mark Reynier loved Irish whiskey compared to Scotch whiskey, he replied that he likes great whiskey, no matter where it comes from. Waterford is double distilling malted barley in Ireland, rather than following other more generally accepted industry cues because of the flavor. “I’m making Scottish whiskey, but I’m making it in Ireland, because that’s where the best barley is! Simple as that!” he remarked.

In the American market, American Single Malt whiskeys are quickly becoming massively popular, and many are choosing to follow the barley, so to speak. Reynier is intent on doing the same with Waterford: the best barley, no matter where it comes from. Tracking the output of farming partners is the bread and butter behind the brand’s strategies of producing the highest quality whiskey. They’re not tracking output though; the brand focuses on the character and quality of the barley. A number of the brand’s farming partners have also begun to move to Biodynamic farming practices.

Mark’s claimed a love of barley that traces back to his days at Bruichladdich. When asked why Waterford is placed where it is, and if there’s a method to location, he remarked: “If you walk out the gates of Bruichladdich with a compass pointed due south, you end up at Waterford – with wet feet. Same bearing as Cambridge, I might add”. Perhaps here the barley is not only better, but smarter, too.

We wrapped up dinner and while Mark needed to head back to Waterford (about 90 minutes away), we decided to venture out on the town for one last drink. We hit up Bar 1661 in Dublin, which Wayne had been nice enough to test drive for us before our arrival. Many of my companions opted for drinks made with Poitin – essentially Irish moonshine – that’s making a strong resurgence in the country. I love high proof and ester driven spirits, though the mind was willing but the body was weak. Still a bit queasy from travel and my recent illness, I went with a safe bet: another draft pour of Guinness. Honestly, it was irresistible. 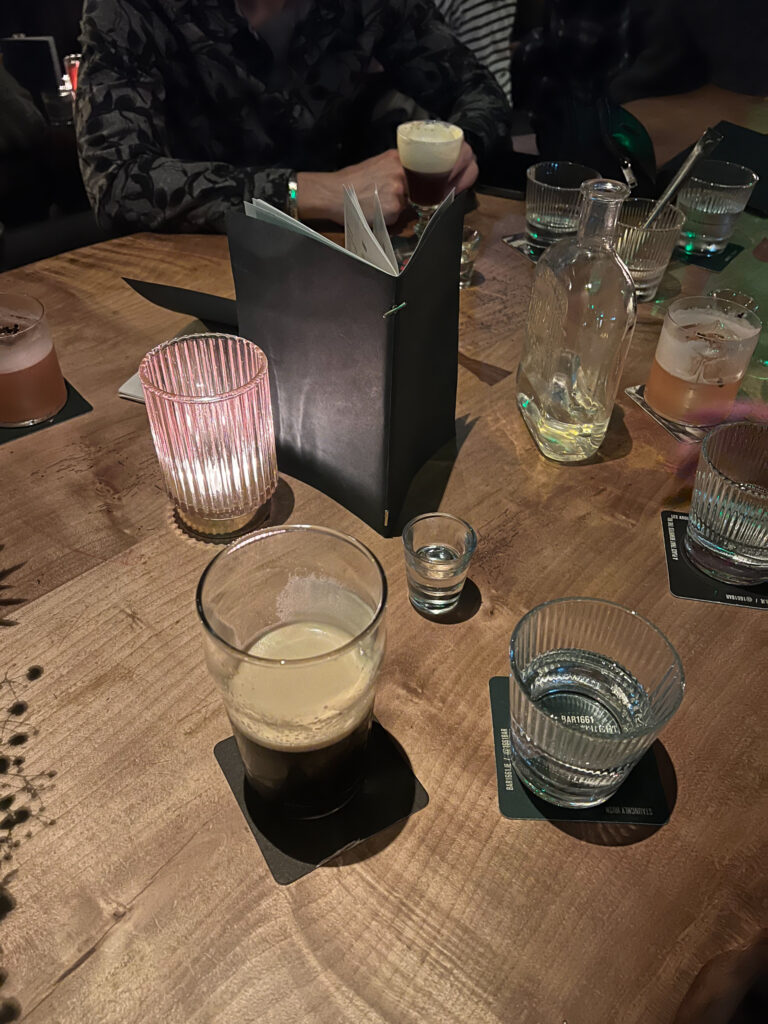 We called it a night after our round, and headed to bed.

The Road To Waterford Distillery

The next day, we were up bright and early. There was a whole lot to see and do. Not only that, but we had whiskey to drink. The bus picked us up in Dublin, and we began our trek towards Waterford. We’d be seeing one of the farming partners of Waterford, seeing several other plots of barley land, taking a swing by church and then finishing up the day at the distillery itself for touring, tasting, and a send off dinner.

Our first stop of the day was about an hour or so south of Dublin, to visit one of the partner farms of Waterford. Trevor’s farm, a biodynamic farm in the countryside, has converted entirely t biodynamic practices and was kind enough to host us for a full tour of the fields and for a country lunch. Biodynamic farming is often believed to be new and entirely scientific in nature and is easy to conflate with similar recent agriculture movements much like sustainability efforts. That’s not entirely right, but it’s not entirely wrong, either. Biodynamic farming isn’t new – it’s based on works from the early 20th century that seek to unite farming, agriculture, livestock and the lunar cycle and cosmos. Working in lunar cycle based rotations for planting, cultivation and more, Farmer Trevor and his family noted their yields have not only increased without major agricultural fertilization and pesticides, but they’ve become more consistent as well. 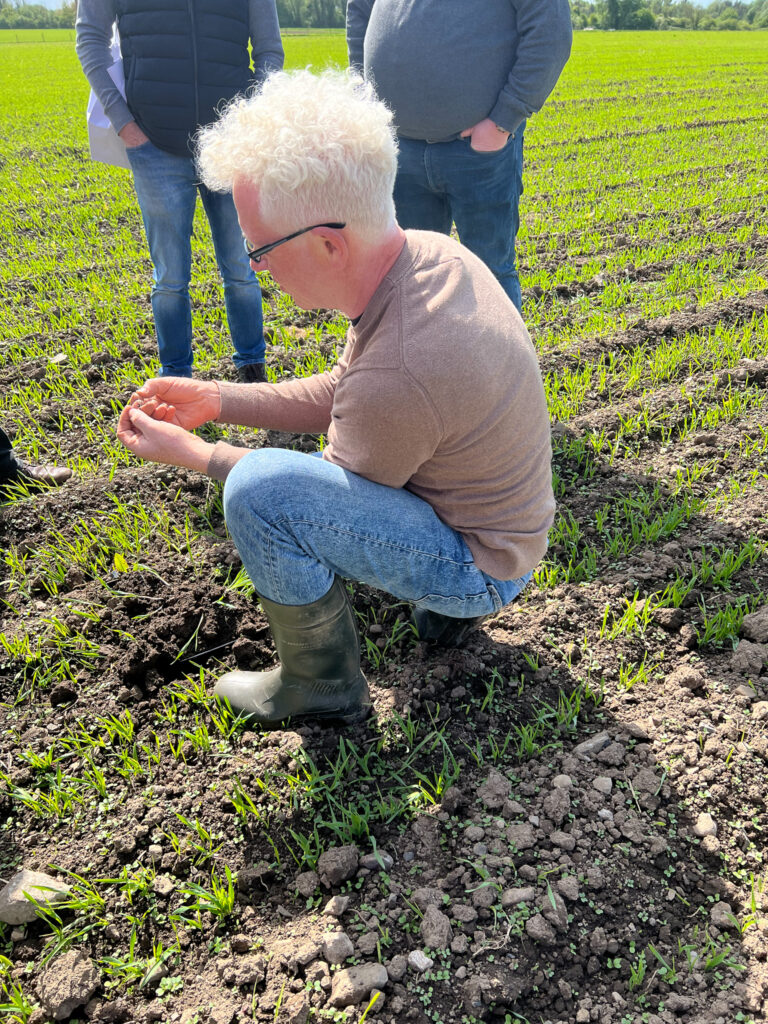 Farmer Trevor is just one piece of a large puzzle, one of 50+ farms in the Waterford grand picture. He notes that their barley tastes different season to season, not just farm to farm. Fertilizing with manure buried in livestock horns, disseminating ground quartz and more are all practices within the biodynamic process, which seeks to integrate as many parts of an ecosystem together as possible.

It was a really interesting lesson, and we spent a good deal of time simply admiring the barley, just peeking out of the soil, at his property. It was at this point that bottles started coming out of bags – it was time to start sampling, standing out in Trevor beautiful fields, in the Irish sun. 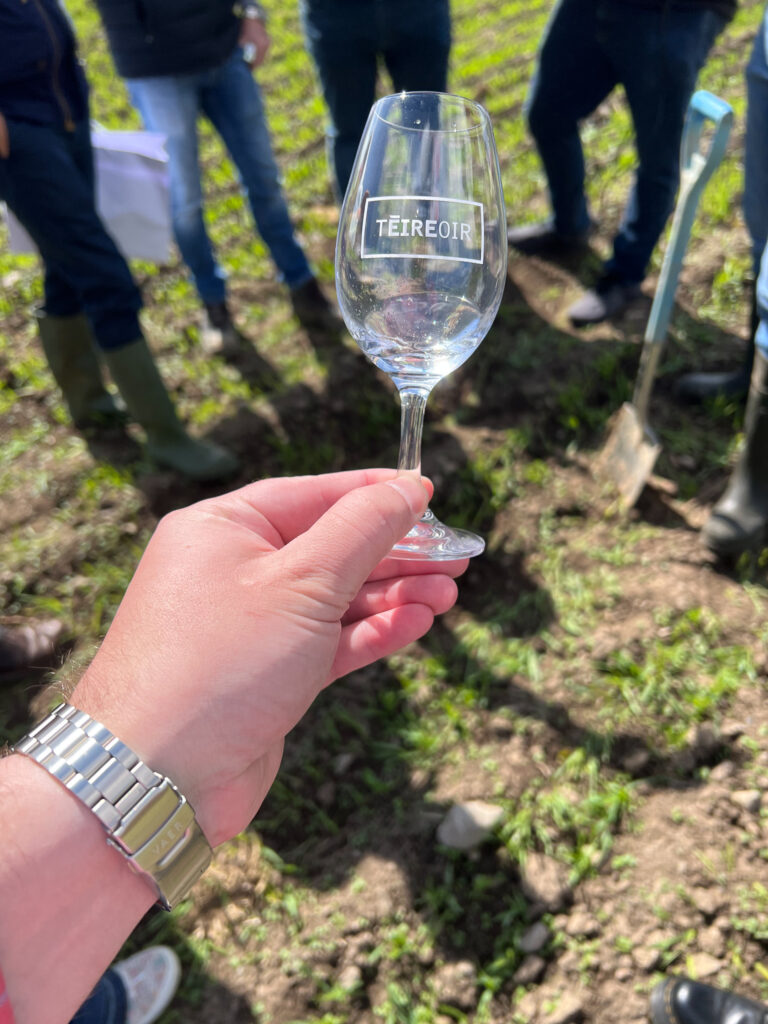 Trevor also had a pair of farm dogs: a Jack Russel for working, and a black lab for companionship. The Jack Russel was very into fetch, and would fetch anything you threw for hours at a time. 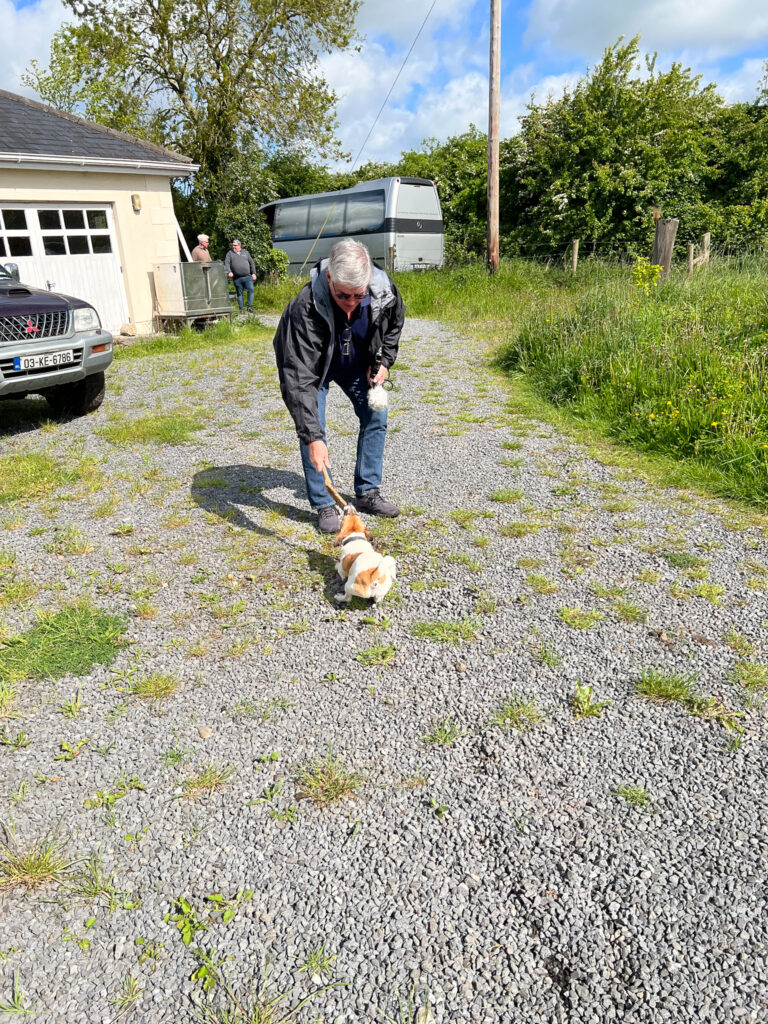 We tasted a number of new make samples, with distillate from a variety of farms, and the difference was remarkable. Different distillate from different farmers had wildly different acidity, the sharpness of ethanol was integrated pretty differently and the soil and ester notes varied greatly based on the barley and farmer.

After a couple of hours of exploring, insight and demonstrations from Trevor, we broke for lunch. Freshly baked bread, fresh cheddar from the countryside (the Wisconsinite in me perked up at this), fresh ham and turkey and most importantly: Waterford, came together for a hearty lunch. 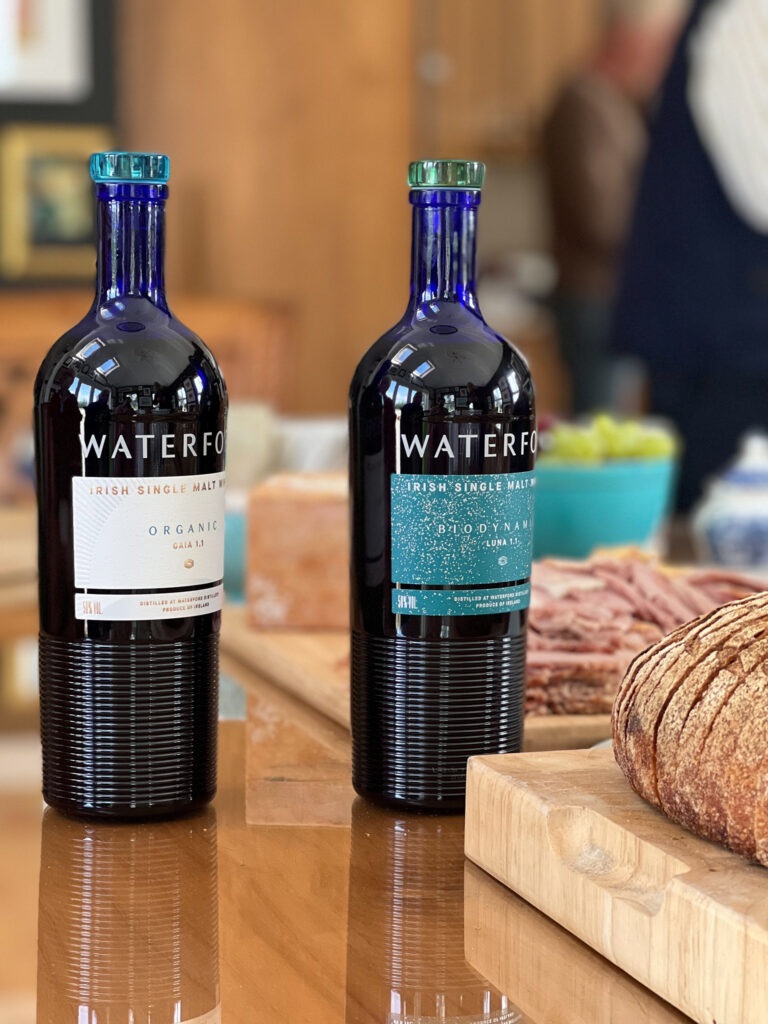 A number of us took a chunk of cheese for the road, something I found great joy in, and we were off. Next, we were to see Waterford Distillery, but first we’d need to take a stop by church.