According to the carbon dating, the Old Ingledew Whiskey from Georgia is believed to have been bottled somewhere between 1763-1803.

According to CNN, the Skinner auction house anticipated the whiskey would sell anywhere from $20,000-$40,000 but exceeded everyone’s expectations when sold for $137,000. “The whiskey is thought to have been bottled in LaGrange in the 1860s, according to the auction house, which said it was standard practice to store spirits in demijohns after being aged in oak barrels.” 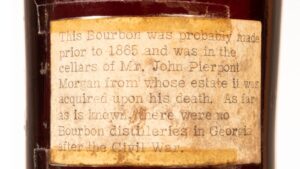 Many people wondered why the whiskey sold for so much, and it’s clear that the answer is age. From the carbon tested liquid it is actually highly likely that the whiskey in fact came from the revolutionary war, and the Whiskey Rebellion.

Skinner’s rare spirits expert, Joseph Hyman, said in a statement that the whiskey “is thought to be the only surviving bottle of a trio from the cellar of J.P. Morgan gifted in the 1940s to Washington power elite.”

While this may be the oldest known bottle of whiskey in the world, it is certainly not the most expensive. With a 60 yr old bottle of Macallan Fine and Rare selling for almost 2 million dollars in 2019.

Now my only lingering question is, will this 200-year-old whiskey finally be drunk? Or is it doomed to be a very expensive talking piece forever?