Portland, Oregon, is where the Freeland Distillery sits. Inspired by owner Jill Kuehler’s meemaw, Kuehler has long carried the vision for making whiskey and carrying on the Freeland rule that all good things come from scratch and that women can be anything they want to be.

Even though Meemaw never touched a drop of booze, she instilled in Jill her work ethic and love of fresh ingredients, and the idea that women can be anything they want to be. A fact that Kuehler took to heart as she not only grew her own business in a male-dominated industry but was also named one of Portland’s 50 most influential people by Portland Monthly Magazine.

Freeland is one of the first all-female owned and run distilleries, a historic feat to say the least. With the help of Molly Troupe, their Master Distiller, who holds a background in biochemistry and a Masters Degree in Distillation from Heriot Watt in Scotland, they can create incredibly fresh gin and bourbon. Not to mention, she is also the youngest female Master Distiller in the United States.

While Freeland Gin came first back in 2017, their bourbon was released just a year later in 2018, and in true Oregon fashion; farm-to-table. “For years, Jill dreamed of starting a distillery featuring the very best of Oregon agriculture. Her friend, and whiskey-drinkin’ buddy, Cory Carman of Carman Ranch, agreed to grow the rye for her future rye whiskey. And thus, Freeland Spirits was born.” 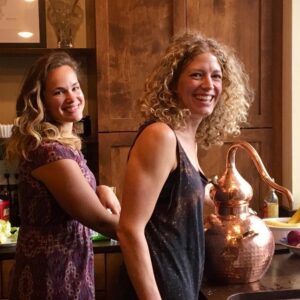 “I partnered with a distillery to get our first bourbon in barrels. We then finished it for five months in Elk Cove pinot noir barrels and blended in a small batch of 12-year bourbon. In the meantime, our beautiful still is working its magic to create future Freeland whiskies.” Says Kuehler of Freeland Bourbon.

Want another thing to love about Freedland Bourbon? It is also surprisingly accessible and has a price tag hovering around $40, which you don’t see every day. The distillery offers multiple pick-up and delivery options for fans local to the Portland area.

Not in Oregon? No problem, shoppers can also use one of the many partners that partner with Freeland’s by clicking here.

CURBSIDE PICKUP: aka the Booze Thru. Place your order online for pick-up. Orders are available immediately at 2671 NW Vaughn St in Portland from 12-6 pm daily.

LOCAL DELIVERY: Add the $10 local delivery item (1st item- top row!) for delivery in Portland. Please have someone over 21 years of age home between 5-8 pm. Orders made after 3 pm will be delivered on the following day.

“Freeland Spirits celebrates the women of the craft. From the gals who grow the grain, to those who run the still, we’re creating superior spirits that celebrate all the Northwest has to offer.”