This New Bourbon Release Is So Strong, It’s Literally Flammable 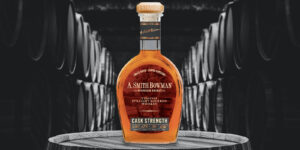 (Image via A. Smith Bowman Distillery)

The bourbon will be available in select markets and also via a lottery at the distillery itself in Fredericksburg, VA.  It carries an MSRP of $99.99 per 750mL bottle.

“We’re excited to add another offering in the A. Smith Bowman line of bourbons, especially a Cask Strength, which we’re sure will be really popular with our fans, said Master Distiller Brian Prewitt.  “This first release in this annual series contains barrels selected from the lower tiers in Warehouses A1 and A.  We thought the flavor combinations resulted in a delicate sipping bourbon that drinks like a much lower proof.  We hope you agree!”

If you aren’t aware, Bowman is owned by Sazerac, the same company that owns Buffalo Trace.  Bowman actually takes new make from Buffalo Trace and re-distills it in Virginia and ages it on-site.  This new release can’t help but remind whiskey drinkers of the days of 70%+ ABV George T. Stagg and William Larue Weller releases. When a spirit crosses the 70% ABV line, it’s quite literally flammable. Liquids such as these require special permits to ship via air, and also see plenty of other “Hazmat” related restrictions related to their storage and shipping.

A. Smith Bowman will retail at the same price as the Buffalo Trace Antique Collection bottles so there are a lot of similarities between the two and we hope those continue when it comes to the actual taste of the whiskey.  More quality bourbon is never a bad thing to hear for us whiskey geeks, so long as one day we can actually find it on the shelves.