Japan’s Prime Minister Yoshihide Suga has declared a state of emergency in Tokyo amid the rise of the Delta Covid-19 strain and has banned alcohol sales.

According to the Spirits Business, the ban is “Set to run from 12 July to 22 August. The state of emergency means alcohol sales in on-trade venues, including restaurants and karaoke bars, will be suspended. Venues will also have to close by 8 pm.” 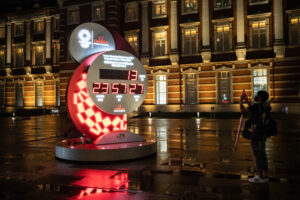 TOKYO, JAPAN – JULY 09: A man takes a photograph of a countdown clock for the Tokyo 2020 Olympic and Paralympic Games at Tokyo Station on July 09, 2021, in Tokyo, Japan. Tokyo Olympic organizers stated yesterday that spectators would be barred from most events at the Games after a new state of emergency was announced in response to a surge in coronavirus cases. The state of emergency will run throughout the Olympic Games and remain in place until August 22nd. (Photo by Takashi Aoyama/Getty Images)

The prime minister also mentioned that although the number of hospital beds occupied by Covid-19 patients remains low, it is important to consider the number of patients affected by the new strain.

However, Japan is not the only country that has banned alcohol sales recently. South Africa has also taken the precaution of banning alcohol which has noticeably impacted their economy, which has put at least 200,200 jobs supported by the alcohol value chain at risk, equivalent to 1.22% of national jobs.

Even with the ban intending to end before the Olympics begin, it will be interesting to see how it will affect the games, if at all.