Want to Empower a Woman? Put Her in the Driver’s Seat, Not Naked on a Bottle | Whiskey Raiders
Article

Want to Empower a Woman? Put Her in the Driver’s Seat, Not Naked on a Bottle 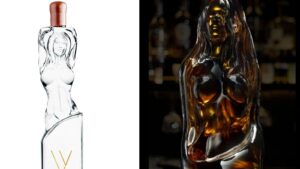 In what seemed like a nightmare Deja Vu to American Woman Whiskey, in a sad turn of events, there is now another spirits company using a naked woman’s body as their bottle.

Believe it or not, the most problematic aspect of both of these spirit brands is not the bottle. It’s the message being used as a way to make the bottle ok. That somehow, they are empowering and liberating women by completely objectifying them. Literally making them an object.

To add insult to injury, neither company is founded or run by women. Vavoom Vodka doesn’t even mention a woman as part of their team in their about section. There is the only mention of two men running the company.

Sadly, spirit companies comparing their drinks to sex is nothing new and will most likely remain a trend for the foreseeable future. The spirits industry, particularly whiskey, is filled with misogyny.

The Light at the End of the Tunnel

With recent incidents like SlapDick, the tides are turning. Thankfully, there are way more good people in the industry than we may even initially realize. It also seems like every day there is another female-run or truly a female-empowering brand that comes around every day.

Here’s a list of brands that make it a point to truly empower women and will one day dance on the graves of spirit companies like American Woman Whiskey and Vavoom Vodka- while fully clothed.

Uncle Nearest is a whiskey brand that was founded by Fawn Weaver and is highly regarded in the industry with an incredible story and master blender.

Freeland Distillery is a distillery entirely owned and operated by women. They make whiskey and gin and are located in Portland OR.

Lynxx Spirits This whiskey is the epitome of female empowerment. Founded by Rachel Svoboda, this bourbon is made for women by women.