What Does Angel's Share Mean in Whisky Making?
Article

The amount of whiskey lost to evaporation during the aging processed is often referred to as “Angel’s share.” First coined in 1970, the phrase is used regularly among distillers and enthusiasts alike.

“Originally, the angels’ share related specifically to cognac, a high-quality brandy distilled from wine in the area of Cognac, a town in the department of Charente, in western France.” According to Word Histories.

However, evaporation is not all a loss. The angel’s share helps with the maturation process and the smoothness in the whiskey. After the sugars in the alcohol ferment, the whiskey (or other distilled drink) would be virtually undrinkable, sometimes as high as 190 proof. To remedy this, distillers typically store the whiskey in oak barrels, often heavily charred before filling. Over time, the liquid evaporates (the angel’s share) through the staves of the oak. The more that vaporizes over time, the lower the alcohol content. 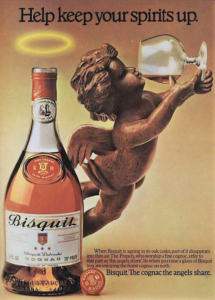 Advertisements for Bisquit appeared in The Illustrated London News from October to December 1972. Photo Credit: wordhistories.net

In total, a distiller can expect to lose at least 2% of the total volume per year. The environment also has a significant effect on the amount the angels take. If the whiskey is aging in an arid location, more water will evaporate than alcohol resulting in a higher proof, so the setting affects the whiskey’s end result quite a bit.

The next time you enjoy your well-aged dram, you can thank the angels for taking their share.

Whiskey Raiders is more than just up-to-date industry news. We also have in-depth ratings of thousands of whiskeys—everything you want to know about whiskey, all in one place.