Spirits group Edrington has revealed the label, or lack thereof, for the rebranding of their blended malt scotch whisky.  Naked Malt, formerly The Naked Grouse, has taken on a literal approach with their packaging as the bottle will only feature a label on the neck and the back.  The front will have a textured logo in the glass itself with a small amount of text below it allowing the whisky to truly be naked even before you pour it into your glass. 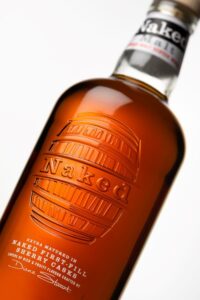 This new packaging looks similar to the new bottling for Wild Turkey as RareBird 101 broke down, that also has smaller labels, and textured logo in the glass itself.  Could this be a new trend in brands to show off the whiskey more and cut down on the wordy backstories and general marketing buzzwords that clog up so many shelves now a days? Both Naked Malt and Wild Turkey say the whiskey itself has not changed, so at least there no worries there, for the moment.