How Many Calories in Whiskey? | Whiskey Raiders

How Many Calories Are in Whiskey? The Answer May Surprise You 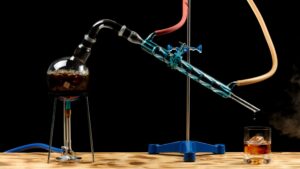 When it comes to counting calories, most of us know that alcohol isn’t always the best option. Cutting out beer, for example, is often a key to weight loss. But what about whiskey? How many calories does whiskey have? Is it as bad for you as other types of alcohol?

While whiskey does have calories, it is not as bad for you as other types of alcohol. In fact, whiskey has fewer calories per serving than beer and even wine. When it comes to calorie counting, whiskey is actually one of the better options.

How Many Calories are in Whiskey?

Spirits are often associated with high calorie counts and adverse health effects, but this is primarily due to the mixers that sometimes accompany them. In reality, whiskey consumed without additional mixers will have minuscule amounts of carbs and zero fat or protein.

After distilling and filtration, alcohol is all that’s left, along with water and the congeners, which give whiskey its aroma and taste. Most of the calories in whiskey come from the alcohol content. Thus, the calories increase with the strength of the bottle depending on its ABV (alcohol by volume).

While the average 1.5-ounce glass of whiskey is around 105 calories, not every whiskey is the same. For instance, 140-proof whiskey will have considerably more calories than an 80-proof bottling.

So, in general, stronger whiskeys will have more calories. However, regardless of the proof, all whiskeys contain a fairly low number of calories per ounce, so it is ultimately up to the individual to decide how many calories they want to consume.

At the end of the day, whiskey is a solid choice if you’re looking to reduce your caloric intake. Just be sure to drink responsibly and in moderation. As always, consult with your doctor before making any changes to your diet or alcohol consumption.