Whiskey or Whisky? When to Include, Omit That Pesky 'E'
Article

Whiskey or Whisky? When to Include, Omit That Pesky ‘E’

Many people are unsure how to spell the word whisk(e)y. Is it whisky or whiskey? The answer, believe it or not, is both. Ultimately, the spelling comes down to which part of the world you are in or referring to.

There are two different ways to spell the word, leading to confusion over the correct spelling. When referring to a liquor distilled from fermented grain mash, specifically Scotland’s national drink, it should be spelled “whisky.” However, when referring to an American type of whiskey made primarily from corn and aged in charred oak barrels for at least two years, then spelled “whiskey.” Ireland also uses the “whiskey” spelling. 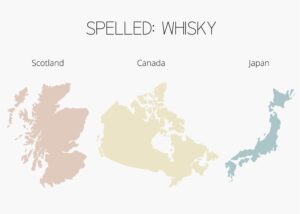 Scotland, Canada, and Japan all spell the word without the E as in whisky.

An easy trick to help remember which countries spell it with or without the “e” is to think about how the location itself is spelled. If the country has an e in its spelling (United States, Ireland), it spells it whiskey. For Scotland, Canada or Japan, use the spelling without the e — whisky. 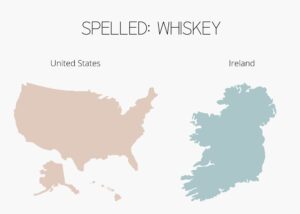 The United States and Ireland use the spelling whiskey.

At the end of the day, there are no spelling police, and these “rules” are not set in stone — spell it whichever way sounds good to you.