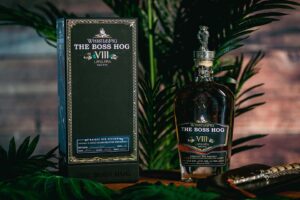 WhistlePig The Boss Hog VIII: LapuLapu’s Pacific is WhistlePig’s latest release. While we know their sourced whiskey has historically been significantly better than their own distillate, a $499 price tag still seems to be incredibly steep for a Rye.

Napkin math yields that this release costs around $29/yr of aging, assuming it’s around the same 17 years old that previous Boss Hog iterations have been. For the record, die hard whiskey enthusiasts usually consider $10/yr or so to be a fair value, and $20/yr to be high on the price scale, perhaps even steep. You can see this is well north of either of those figures. The absent age statement only serves to potentially make the value proposition harder to swallow, since its likely this would trend younger.

However, the newest addition does have some unique attributes that help ease the sting of the price. WhistlePig The Boss Hog VIII: LapuLapu’s Pacific has been bottled at barrel strength with no chill filtration or coloring added to preserve the liquid’s original character.

WhistlePig WhistlePig The Boss Hog VIII: LapuLapu’s Pacific will be available beginning this month. If you have $500 to blow, this could be a unique rye to add to your liquor cabinet. A big benefit of this high price tag? You’re unlikely to see it flipped on secondary or being traded in your local whiskey group for a bonkers valuation. At $500, it should sit on the shelf biding its time for someone who will inevitably purchase and drink it. It’s a little tougher to be mad at that.