The TTB has approved a label for the next installment in the WhistlePig Farmstock series.  This time, it is a single barrel, bottled-in-bond bourbon.  Named “Farmstock Bourbon: Beyond Bonded,” this appears to be their first bourbon as well as the distillate coming entirely from their Vermont distillery. The label indicates that the bourbon is just under 5 years old and consists of 51% corn and 49% rye. 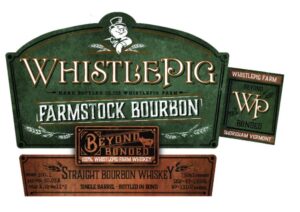 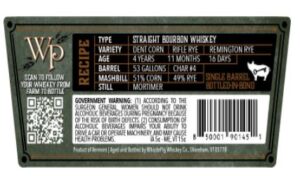 While TTB approval of the label isn’t a guarantee of the product coming to market, this is another example of WhistlePig appearing to toe the line of label regulations.  They have previously been flagged and reported for not disclosing the origin of their whiskey and no distinction between when a bottle contains Canadian or MGP rye.  Their initial Farmstock releases were labeled “Bottled-In-Barn,” a clear play on “Bottled-In-Bond” despite following none of the requirements for the historic 1897 legislation for consumer protection.

This new label raises some eyebrows as well.  It bears the “Bottled-In-Bond” label which it appears to hit the marks of, but the ABV is noted as 50.05% and 100.1 proof.  While the TTB does allow for a tolerance of 0.15% ABV in the label, and the approval allows the ABV to use a placeholder rather than the specific number for the bottle, a requirement of the Bottled-In-Bond label is to be exactly 50% ABV/100 Proof.

The label also proudly flaunts that it is “Beyond Bonded,” but nowhere does it define what that means?  With the strict regulations, what could they have done to set them so far ahead?  It seems a bit disingenuous and more like marketing.  Hopefully, WhistlePig can back up these claims if the product comes to market, otherwise more legal trouble could be heading their way.