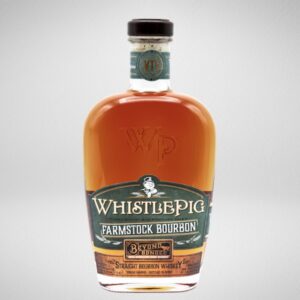 The whiskey giant famous for its rye varieties has finally introduced the world to its first-ever bourbon.

According to the WhistlePig website, the FarmStock Beyond Bonded is their boldest endeavor yet. “a tribute to the hearty, heirloom crop at its core. Carefully crafted from grain-to-glass, each single barrel is an untapped expression of the WhistlePig Farm.”

Aged at least 4 years, 4 months, and 14 days in Vermont Estate Oak barrels. The bourbon itself is made up of  51% Dent Corn and 49% Remington and Rifle Rye.It was also bottled by hand at 100.1 proof entirely by hand.

Introducing the first ever 100% WhistlePig Farm Rye AND Bourbon Whiskey. This is Beyond Bonded.

Consumers can use WhistlePig’s store locator tool to pick up a bottle.

“Whiskey making is often a labor of love, but farming is always a toil of untempered purpose. Especially here in Vermont, where a short growing season and extreme temperatures render each harvest all the more precious. From Farmer Lee to each individual barrel and bottle, every step from grain to glass is all the more meaningful.” -WhistlePig