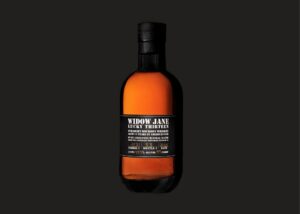 This new and unique Bourbon was initially released as a private single-barrel program at a variety of proofs. Still, it will now be available exclusively at 93 proof (46.5% ABV) in hyper small batches, making this Bourbon addition a unique expression of Widow Jane’s intense, complex profile.

The Bourbon has aged 13 years in American oak barrels hand-picked by Widow Jane President and Head Distiller Lisa Wicker. LUCKY THIRTEEN is proofed with limestone-rich water from the legendary Rosendale Mines of New York. According to the press release.

According to Widow Jane President and Head Distiller Lisa Wicker, LUCKY THIRTEEN will be a real treat due to the fine and delicate blending process. Aging the bourbon in hyper small batches, absolutely not chill-filtered, has resulted in a rich mouthfeel and lingering finish.

Wicker has said, “I see the ability to share really special expressions, like Lucky Thirteen, with whiskey geeks and industry friends as one of the real gifts of this profession. As our stock of well-aged bourbon beyond 10 years continued to mature, we were able to match Lucky Thirteen to our signature blending process, consisting of bourbons from Kentucky, Tennessee, and Indiana. This was a very natural evolution for us, to make a rich, complex bourbon, while upping the ante in proof to 93, versus our 10 year bourbon’s proof of 91.”

LUCKY THIRTEEN will be available anytime but might be limited in quantities. The suggested retail price is $99.99 for a 750 mL bottle.