Wild Turkey’s Newest Release Is Going To Break The Internet 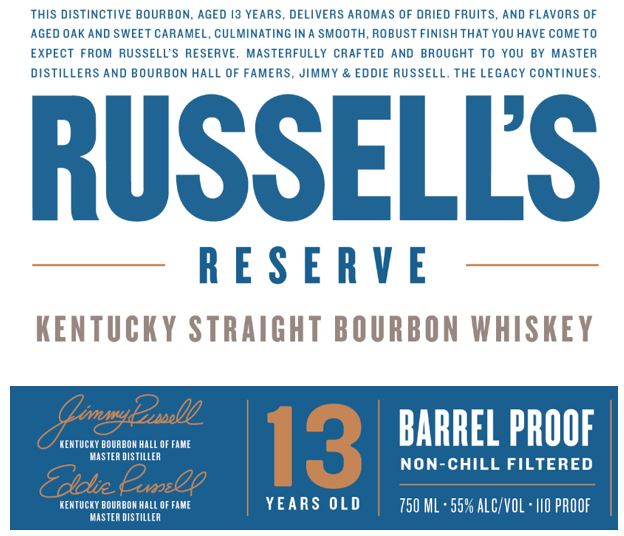 Wild Turkey has gained popularity like few other enthusiast whiskey brands in recent times. The brand still lags behind the true behemoths of industry – Beam, Buffalo Trace, Maker’s Mark, etc – but, its growth has been impressive.

Slated to be 13 years old (duh), bottled at barrel proof and unfiltered, this combination of stats is the real deal for fans of Wild Turkey. Barrel proof for Wild Turkey isn’t often much more than 55% ABV, but it’s been long chased and rarely found (and only then, by lucky few) by fans of the gobble.

From the June 1st dated release: ” Straight up and straight out of the Commonwealth of Kentucky comes one of the boldest, yet smooth, limited-edition bourbons ever. Honoring the family ties that bind, Eddie Russell is introducing Russell’s Reserve 13 Year Old, a 114.8-proof Kentucky Straight Bourbon that, once again, exemplifies the Russell family’s mastery of bourbon-making. In the ultimate distilling challenge, Eddie aged this one-of-a-kind release for at least 13 years, maintained the barrel proof and opted not to chill filter the whiskey, creating a more robust mouthfeel and authentic bourbon experience.”

Perhaps the two most dreaded words to every whiskey drinker (besides ‘whiskey stones’) immediately make an appearance: limited edition.

Wild Turkey has become incredibly hyped in the last 5 years, and releases from the brand that used to rot on shelves, like Wild Turkey Master’s Keep, now sell with a hefty velocity. A limited drop means this isn’t yet a core product. Therefore, fans of the fantail will need to keep a keen eye and likely fight one and other for access to just a single bottle, let alone the spares and backups enthusiasts will want to bunker.

Whiskey circles were immediately whipped into frenzy, with additional leaked images coming into play. Post after post made appearances in group after group across Facebook with comments bemoaning the eventual difficulty in finding Wild Turkey’s new release, offers to BIN (buy it now – funny since it’s not available yet) or general fanfare (many heart eye emojis).

David, author of the press release post, even remarked at the insane traffic it generated:

My blog saw an 852% increase yesterday. I’ve never had a press release post (or any post to date) get so much attention. Wild Turkey has come a long way. Folks are finally realizing its quality. I’m happy for the Russells and the entire Turkey Team. Well deserved. 👏

For a product that’s not even available to market yet, it’s a clear sign of the enthusiasm to come with this new Russell’s Reserve.

There’s little doubt that this is the answer to many Wild Turkey fans prayers for the Russell’s line: the combination of barrel proof, healthy age statement and no filtration lacks only a single defining trait we’re unlikely to see: single barrel. The Russell’s are pretty well known for their blending chops, so I expect few fans will rabble.

Will Russell’s Reserve 13yr become the newest unicorn bottling for the brand? That’s unsure until we’re able to review and cover the bottling.

One thing is for sure, though, when Russell’s Reserve 13yr finally hits shelves, it’s going to break the internet.