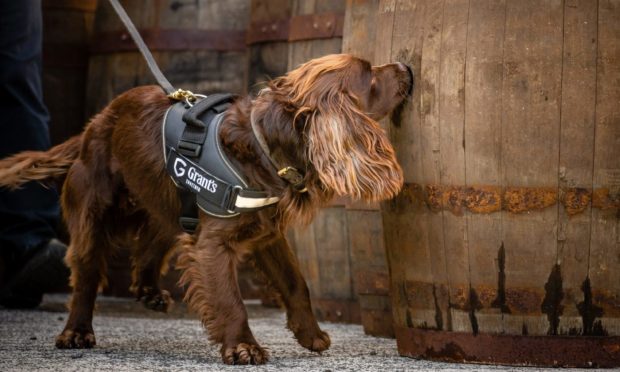 There’s no denying that plenty of work goes into bringing any good Scotch whiskey to market. Many hands go into the production of barrels, the growing of grains, fermenting and distilling, bottling and more. Until now, these were all done by human hands, but Scotch whisky giant, William Grant & Sons, is welcoming a new breed of skills to their whiskey labor force. Of course, we’re talking about a set of paws, as they welcome Rocco the dog, to Girvan Distillery.

Rocco, a one year old Cocker Spaniel, is tasked with inspecting casks and the grounds, trained to sniff out leaks and imperfections. Distilleries and producers like Girvan often have thousands, if not tens of thousands, of casks aging under their care.

Looking over all of these manually can add up to be quite the job, and innovation has always been a hallmark of the whiskey industry. Rocco diligently employs his nose to help track down issues that may be lurking. It’s not often we see dogs in the whiskey industry; most producers typically prefer feline friends to help them curb pests on the premise. Canine noses are phenomenally sensitive, boasting both range and acuity that humans can’t come close to matching.

William Grant & Sons owns a great swath of whiskey producers. Girvan, now home to Rocco the pup, is a producer of grain whiskey, destined for hyperaged single cask bottlings, and blending for larger product lines. Grain whiskey has long been a notable pillar of the whiskey world – blended whiskey outsells Single Malt Scotch at a frightful pace year after year.