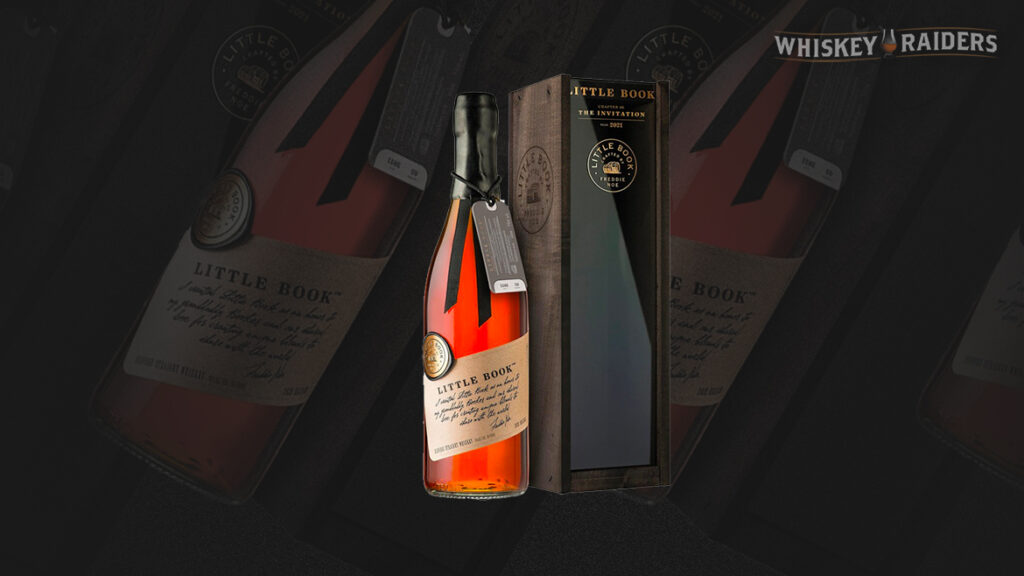 Admittedly, bourbon isn’t meant to be super inexpensive. At the end of the day, high end spirits are a luxury good. Whiskey enthusiasts certainly don’t need them, but boy do they love them.

That said, people always love a good value. We’ve seen incredible offerings as the hype for whiskey heightens. Knob Creek Single Barrels for $50. Eagle Rare 10yr Bourbon for < $30. New Riff is one of the most competent craft producers in existence, with Chattanooga Whiskey right on their coat tails. Their bottlings? Also under $70.

As the sun rises once again, a new Bourbon whiskey release has been announced. This time, it’s the brand new entry for Little Book, a whiskey release from Jim Beam. The new announcement has sparked plenty of emotion – be it intrigue, excitement or disdain, and there’s a lot to unpack.

Little Book Chapter 5 has been announced. Titled “The Invitation”, the new entry in the Little Book timeline is produced by Beam and guided by Freddie Noe. Freddie is an 8th generation distiller at Jim Beam, and the newest details regarding the release are nothing sort of interesting.

Little Book has always sought to tell the story of a blend – whether it’s different mashbills, varying ages, etc. The Beam portfolio contains nothing shy of a mammoth quantity of Kentucky Straight Bourbon Whiskey – from Bakers, to Bookers, to Beam White and Black labels. Experimental blending releases aren’t common, and as we can see now: they certainly aren’t expensive, either. Little Book is releasing in 750ml bottles, with a suggested retail price of $124.99.

The facet of Beam’s newest Little Book that has the internet stirring is going to make or break the release: the age of the components. Blended whiskeys can be comprised of multiple different whiskeys, all with different ages and mashbills. In this case, Freddie Noe elected to choose a 2yr Straight Bourbon from Kentucky, a 3yr 100% Malted Rye whiskey, a 5yr Straight Bourbon and 15yr Kentucky Straight Bourbon.

Across the board, this is pretty interesting. Mingling 2yr whiskey with 15yr whiskey hasn’t always been common. That said, releases that have long existed – like Wild Turkey Rare Breed – are known to include a little older “juice”. Bardstown Bourbon Company’s newest Discovery Series and Fusion Series both contain wide ranging ages and mashbills. With no disclosed ratios or recipes by quantity, though – it’s impossible to tell how much old KSBW makes up the new Little Book recipe.

So far, it looks like the internet is fairly wary. Assuming that the oldest component of the blend (and therefore likely the most expensive for the brand to include) will be just a tiny percentage appears to be the running theme among enthusiasts.

$125 for two, three, and five year old bourbon with a splash of 15 year old? Let me get my running shoes on… https://t.co/5cG3DrVQ9f pic.twitter.com/CHEchiU3Bs

Others have weighed in with more nuanced opinions – perhaps Freddie has been on to something all along. Little Book 2 was well received and contained even stranger (and older) components.

So we’re just going to ignore the 40yr-old stuff in #2? Presumably because ew, Canadian.

We’ll have to let our palates decide when bottles begin to drop later this summer. Will whiskey enthusiasts take a blind leap, ideally trusting the success of previous Little Book batches? Jim Beam sure hopes they will. That said, Beam is known for often prioritizing profit and marketing over the good of a brand (many are still sore over Booker’s 2016 price hikes). There’s plenty of worthwhile arguments on both sides of the Little Book, so it looks like the whiskey world will just have to wait for the newest Little Book to hit local shelves and dive in. Something Beam assuredly hopes whiskey fans will do en masse.

More from Whiskey Raiders as we wait to procure, take down notes, and review the newest Little Book from Jim Beam. We’ll keep judgement reserved until then.