Would You Want A Whisky Brand For Your Legacy? | Whiskey Raiders
Article

Would You Want A Whisky Brand For Your Legacy? 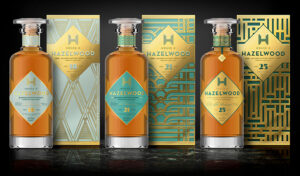 William Grant & Sons have long been in the Scotch Whisky industry, dating back to the opening of Glenfiddich in 1887.  Today, they continue to operate the distillery and also own other brands such as Balvenie and Tullamore Dew.  A major reason for the company’s growth and success stems from William Grant’s Granddaughter, Janet Sheed Roberts.  While never directly involved with the production of the whisky, she was there for every major development and achievement of the company during her life, including opening the Glenfiddich Visitor Center in 1969, and helped take care of the family.  Roberts passed in 2012 at the age of 110.

To celebrate her life, the company developed and released a line of blended Scotches to commemorate her achievements and experiences.  House of Hazelwood is named after the residence that Roberts spent her whole life in, and has 3 expressions, each inspired by her travel and adventures.  Glenfiddich also released a 55 Year Single Malt in her honor with only 11 bottles (one for each decade she lived) to be available via auction with proceeds benefiting charity.