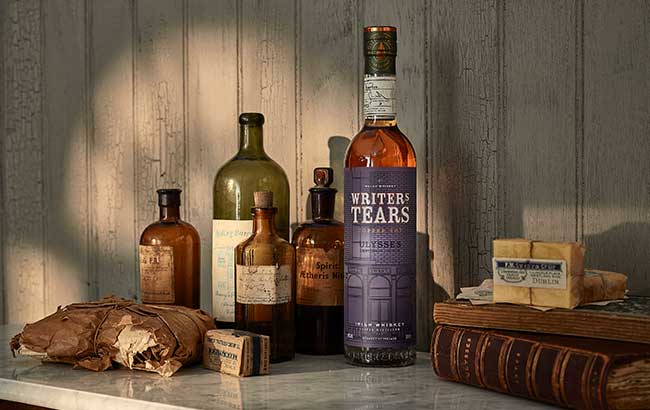 Irish whiskey brand Writers’ Tears has unveiled a limited edition bottle for its Copper Pot expression. The bottling commemorates the 100th anniversary of Irish novelist James Joyce’s “Ulysses,” according to The Spirits Business.

The new Writers’ Tears Copper Pot design is limited to 5,442 bottles and available in Ireland, Austria, Canada, France, Germany and the United Kingdom. It sells for a suggested retail price of €45 ($48). The whiskey was made with a mix of single pot still and single malt whiskeys.

“Celebrating Ireland’s literary greats has always been at the core of the brand and there is none greater than James Joyce,” said Bernard Walsh, creator of Writers’ Tears and managing director of Walsh Whiskey.

The bottle was designed by Studio Minerva of London. It features a line drawing of Dublin-based Sweny’s Pharmacy, a Victorian shop Joyce visited in 1904. The shop is featured in “Ulysses.” Today, the pharmacy is a cultural center dedicated to celebrating Joyce and Ireland’s other great writers.

“We are delighted to play our part in supporting Joyce’s legacy through Sweny’s Pharmacy, which is a piece of perfectly preserved living history from Joyce’s Victorian Dublin,” Walsh said.

The brand is also launching a Ulysses Centenary program in Dublin, with events taking place June 12, June 15 and June 16. Activities will include a reading from “Ulysses,” a whiskey tasting led by Walsh and a drinks reception at the International James Joyce Symposium in the Museum of Literature Ireland.