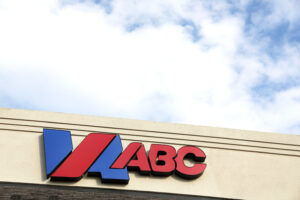 The sign of a Virginia ABC store is seen Feb. 28 in Alexandria, Virginia. Virginia Alcoholic Beverage Control Authority has removed Russian-sourced vodka brands from their shelves after Governor Glenn Youngkin called for “decisive action” in support of Ukraine after Russian troops invaded the country. Two liquor store employees have been indicted in an ABC embezzlement case. (Photo by Alex Wong/Getty Images)

Two men, including one Virginia Alcoholic Beverage Control employee, are facing felony charges after allegedly leaking inside information and access to internal liquor data, according to the Virginia Mercury.

In April 2022, Virginia ABC Liquor stores announced a new “drop” system, which randomized the stores that extremely rare bottles of bourbon were going to be sold in. A commenter on the agency’s Facebook page suggested someone had been trying to sell intel on the location of these bottles to consumers.

“I had someone tell me that they have a back door in to the VABC computer system… when they had the Stagg release they knew how many bottles were going to be at what stores,” an online commenter wrote.

“Somewhat true but not entirely,” another commenter replied. “Insider info.”

However, there was some truth to the first comment. Virginia ABC liquor stores conducted an investigation into the situation and found that Edgar Smith Garcia, 28, of Manassas; and Robert William Adams, 45, of Chesapeake had created a scheme to sell the information to interested buyers.

Garcia was an ABC employee who allegedly passed along internal agency information. The accused co-conspirator, Adams, allegedly then sold that information online through bourbon hunting groups on various social media platforms, according to the Virginia Mercury.

The men were indicted on charges of felony computer trespassing and embezzlement after they used a security vulnerability to access ABC’s inventory list. According to court documents, Adams and Garcia were both released on bail following their arrests.