An Evening at the 2022 St. Louis Bourbon Festival

An Evening at the 2022 St. Louis Bourbon Festival 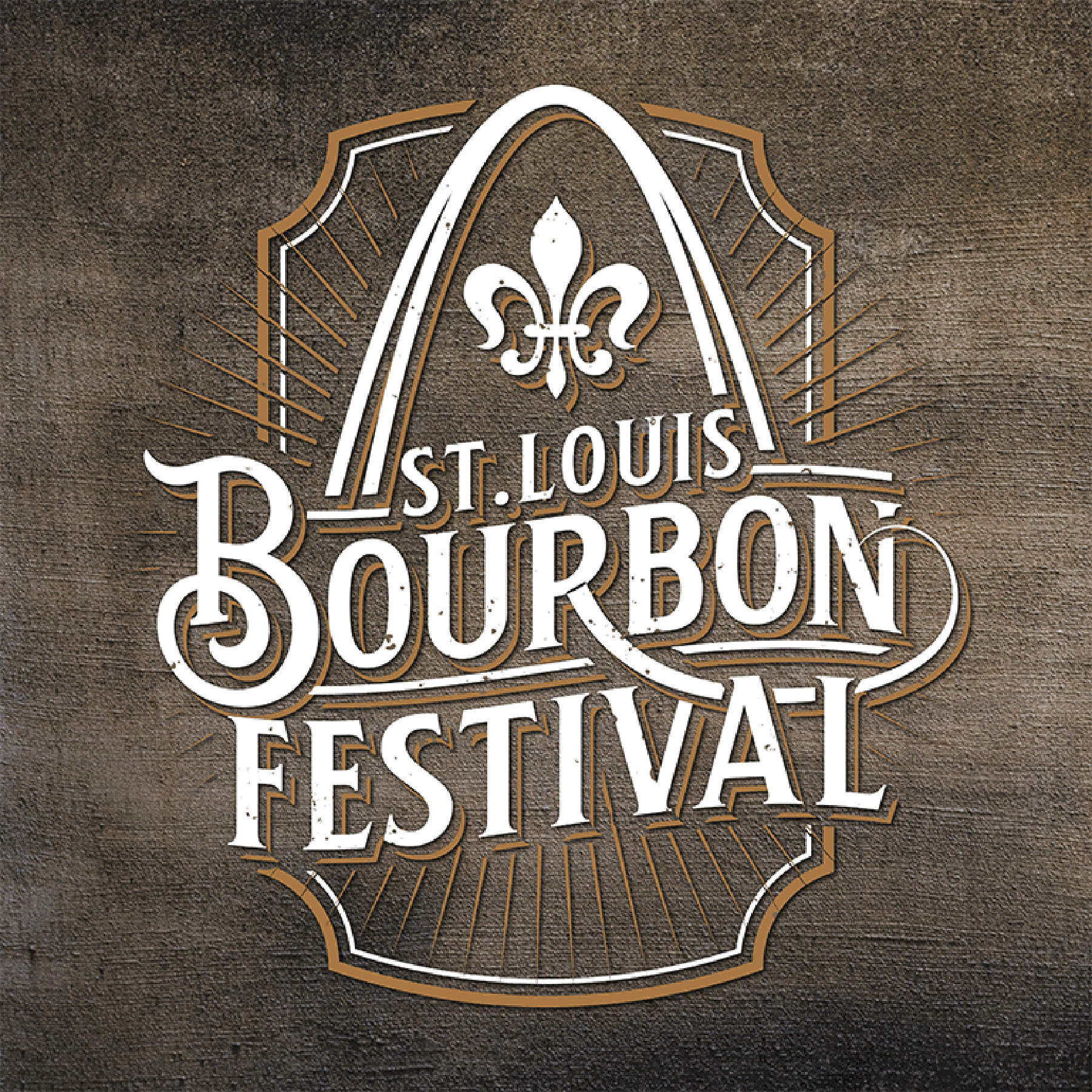 If a supposedly haunted manor, food trucks and whiskey galore sound like ingredients to your kind of night, you might have missed out on the perfect event for you this month — but hey, there’s always next year.

On Oct. 21, the St. Louis Bourbon Society hosted the St. Louis Bourbon Festival for the second straight year. We checked out the event, which was much larger this time around than in its inaugural year. After making more than 150 whiskeys available in 2021, this year’s event featured upwards of 450, and the festival that in 2021 was small enough to be held in Lemp Grand Hall was no longer so easily contained, extending into the surrounding streets in Year 2. Despite the event’s name, more than bourbon was available. Bourbon was the most prevailing spirit, but ryes, American single malts, scotches and even tequilas were present.

The event was quite crowded this year, with nearly 1,700 attendees present — about double the 700-800 that showed up in 2021, the St. Louis Bourbon Society told Whiskey Raiders.

Nearly 30 minutes after non-VIP ticket holders were allowed in, lines for entry were still quite long — a sign of a popular event.

As we walked up to the Lemp Mansion, said to be one of the 10 most haunted places in the U.S., and checked in, we were given a guide to the festival, a map and a glass for the evening, which features the festival’s logo on one side and sponsor Penelope Bourbon’s on the other. Once you’ve bought your ticket and entered the festival, whiskey samples don’t cost any extra. You can spend the evening, which runs from 5-9 p.m. (or 4-9 if you buy a VIP ticket) filling that glass up countless times, although many of the participating brands offer their own, disposable tasting cups in case you’re worried about mixing aromas and flavors of different whiskeys. 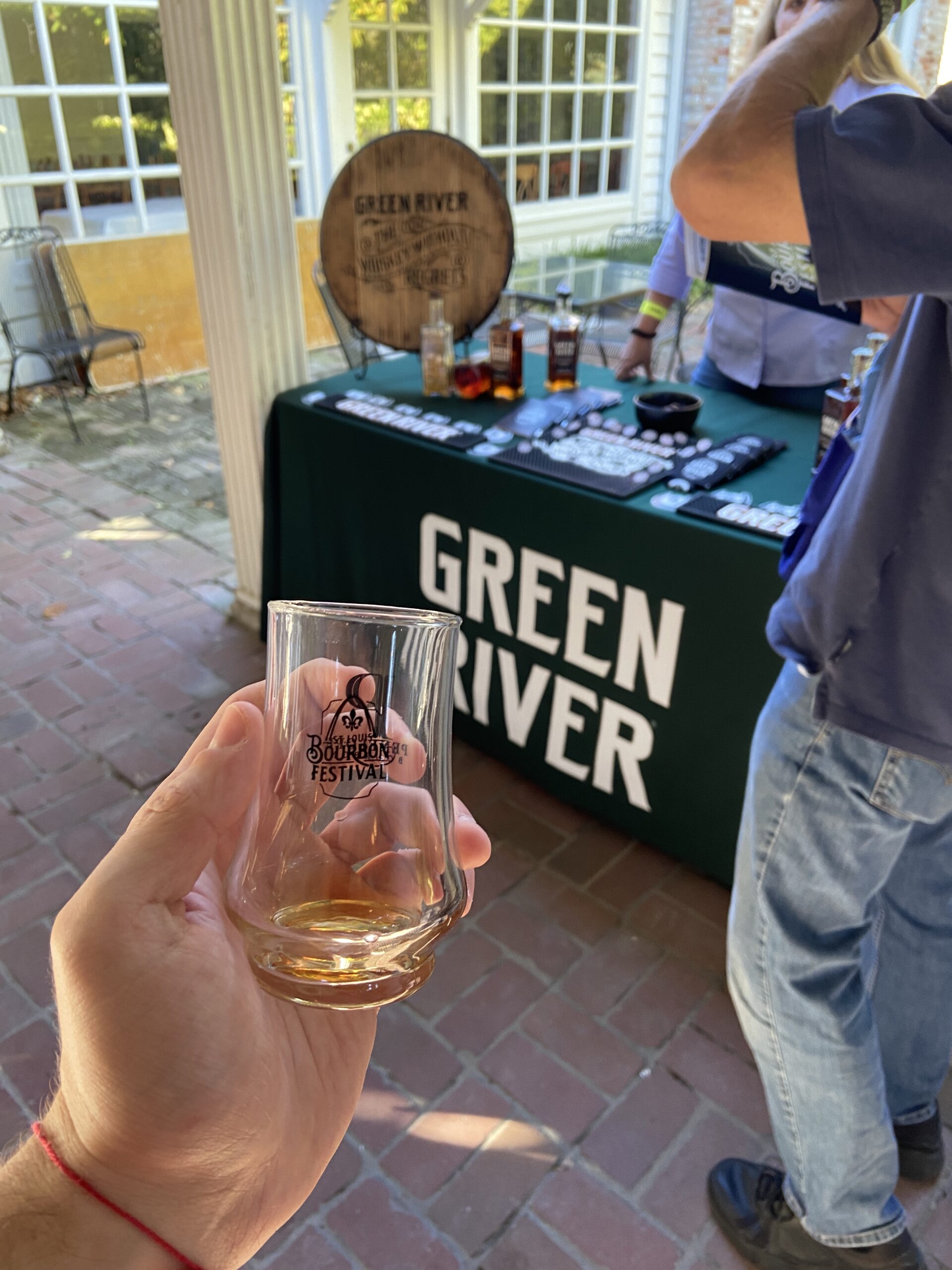 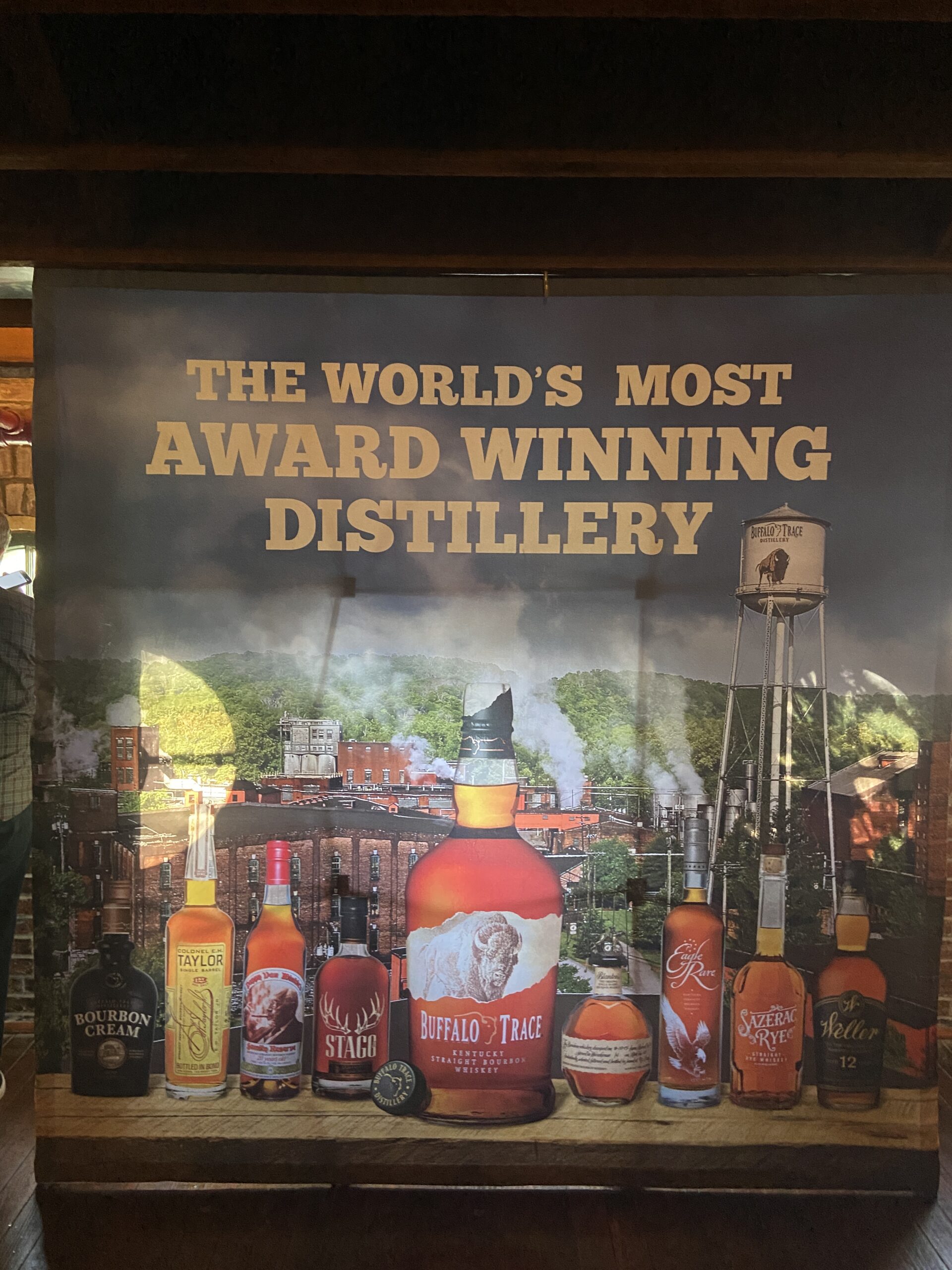 A number of rare, pricy Buffalo Trace brands were represented in the VIP Lounge.

There was plenty of whiskey to keep busy with outside, but the majority of the samples lay indoors. After entering the Lemp Manion, we ascended a narrow, creaky staircase and at the top reached a choicepoint: the VIP Loft or the grand hall. The VIP Loft, which you were able to access if you had a VIP ticket (priced at $120 vs. the $90 general admission tickets) held some of the less common, more expensive brands of whiskey, including E.H. Taylor, Weller, Elmer T. Lee, Eagle Rare, Blanton’s and Penelope.

A pair of busy bartenders at the back of the packed VIP lounge served up Old Fashioneds and Blood Orange Whiskey Sours made with Buffalo Trace. 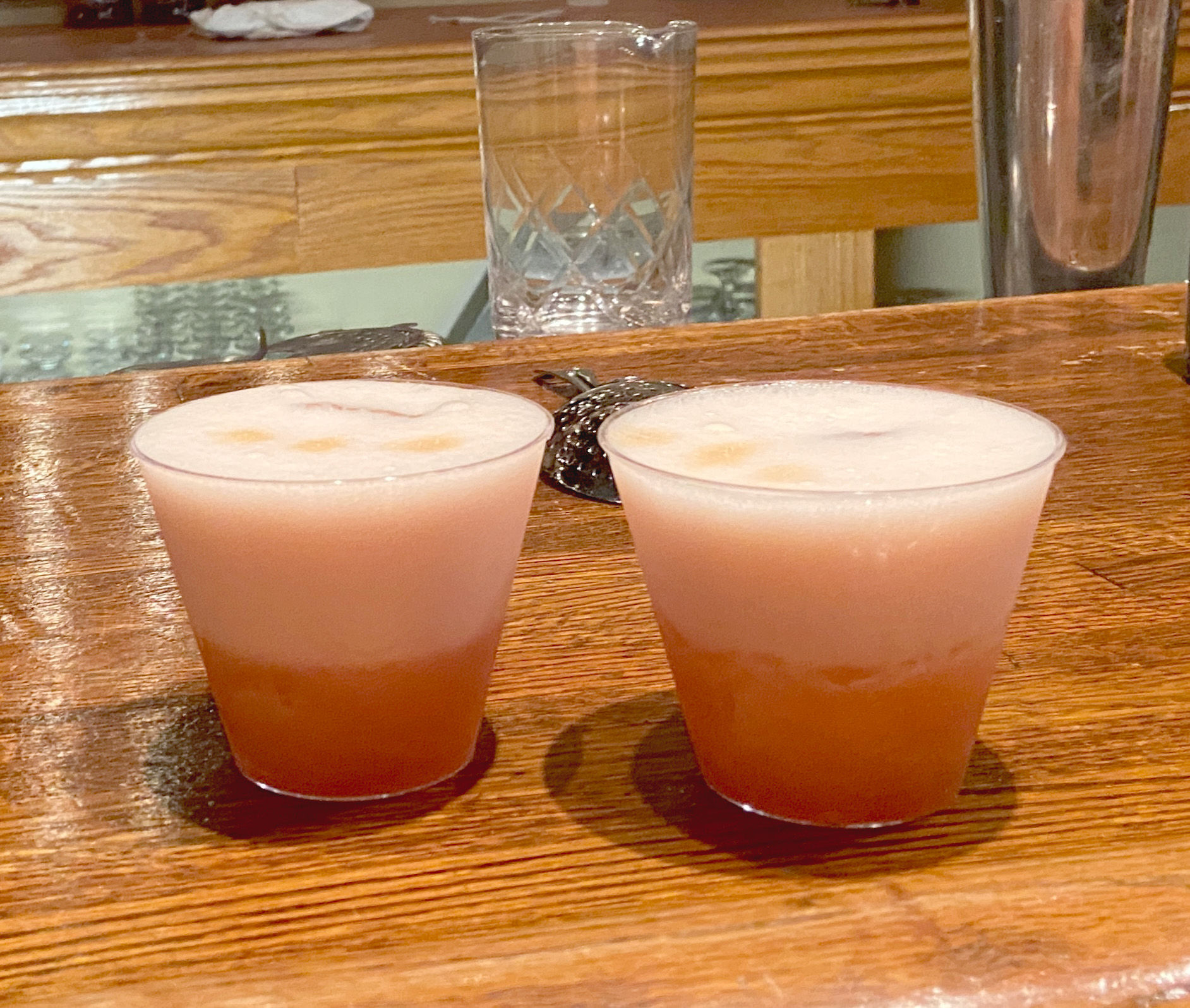 When You Need a Bourbon Break

Taking breaks is a key facet of any festival whose central function is drinking. Importantly, the St. Louis Bourbon Festival offers a few alternatives to drinking when you find yourself needing to slow down. First, the cans of Liquid Death water scattered throughout the event were vital, as hydration is a must at a whiskey festival. Beyond water, the most important way to slow down was the food trucks, of which there were four, all on 18th Street: Truckeria (tacos), Farmtruk (farm to table — well, farm to truck, rather — comfort food), Case and Bucks (pub food) and Lumpy Mash Potato (deep fried turkey legs and loaded mashed potatoes). Picnic tables were available to eat at, although certainly not enough to meet the number of diners.

Another way to switch it up if your palate starts to get shot is by switching to something lighter: beer! Bluewood Brewery is located where the Lemp Brewery stables once were. Bluewood is accessible without needing to leave the festival, has a wide variety of brews and provides significantly more seating options in case you need to park somewhere and eat. Plus, the brewery houses a restaurant: Burger 809, whose sliders were named the best of St. Louis this year by the Riverfront Times. 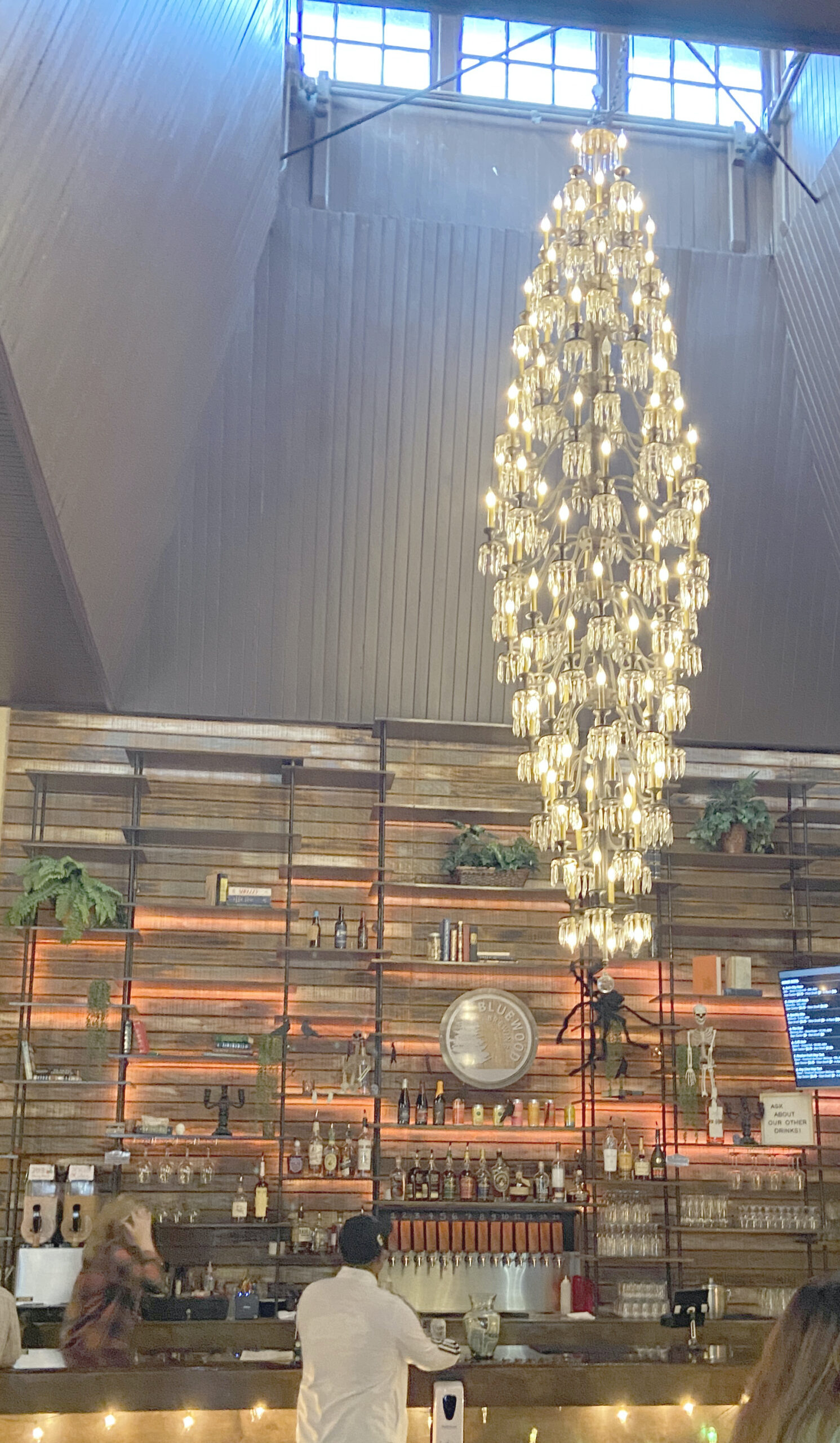 The Bluewood Brewing bar is pictured during the St. Louis Bourbon Festival.

Whiskey for a Cause

Auction/raffle proceeds at the festival benefitted the St. Louis Hero Network, a nonprofit that supports the businesses of first responders and military families. In total, the St. Louis Bourbon Festival raised more than $20,000 for the cause.

If you’re a whiskey enjoyer in the area and missed the St. Louis Bourbon Festival this year, don’t make the same mistake in 2023. The price of entry may be a bit steep, but you’ll make up for the cost with plenty of pours that would otherwise be pricey. The festival brought a rockstar lineup of whiskeys to taste, and the inclusion of food trucks, live music and a terrific venue sealed the deal: this is a great event. The free water and cocktails (if you splurge for a VIP ticket) help, too.

To further enhance your experience, sign up for special presenter-led tastings, which this year were led by notable bourbon experts and celebrities such as Peggy Noe Stevens, the world’s first female master bourbon taster and a Kentucky Bourbon Hall of Fame inductee; renowned whiskey author, writer Fred Minnick; former St. Louis Blues player Bob Hess; Penelope Bourbon CEO and founder; Old Elk Master Distiller Greg Metze; and Uncle Nearest Master Blender Victoria Eady Butler. Tickets to these presentations cost extra, but many of them are truly rare opportunities worth the cost to many whiskey fanatics. This year’s lineup of presenters this year was quite impressive, and we look forward to see who’s up to bat next year.