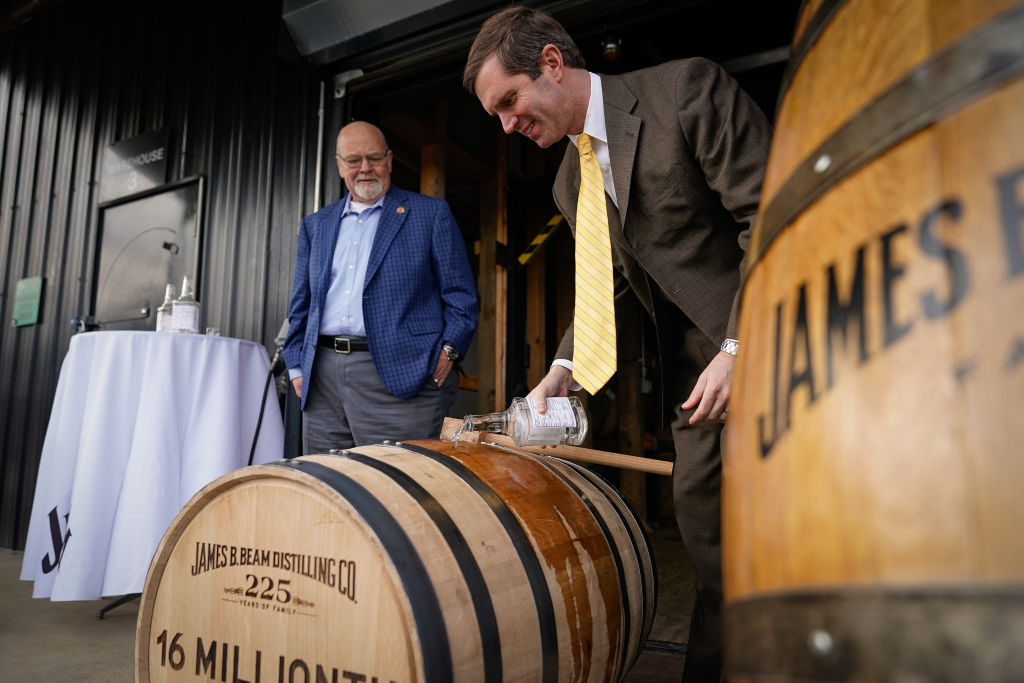 Kentucky Gov. Andy Beshear fills Jim Beam Distillery’s 16 millionth barrel of bourbon, as Master Distiller Fred Noe looks on, at the Jim Beam Distillery on Feb. 17, 2020, in Clermont, Kentucky. Beshear may have played a role in the Biden administration striking a deal with Europe to remove tariffs on American whiskey. (Photo by Bryan Woolston/Getty Images)

Earlier this week, news broke that the Biden administration had come to a deal with the European Union to lift tariffs on American whiskey, which were placed upon the U.S. by Europe in retaliation to steel and aluminum tariffs imposed on Europe by former President Donald Trump.

The timing of the deal was cutting it close. On Dec. 1, exactly one month from the date the agreement was announced, the 25% tariff was set to double to 50%. As it turns out, Kentucky Gov. Andy Beshear may have played a role in getting the deal done, according to the Lexington Herald-Leader, which reported Thursday that U.S. Commerce Secretary Gina Raimondo frequently talked to Beshear regarding the tariffs.

“I had a lot of contact with the governor,” Raimondo told the Herald-Leader. “Mostly him calling me regularly saying, you know, ‘Please please please, you have to resolve these tariffs, because a lot of people are going to lose their jobs.’”

Raimondo didn’t directly say that Beshear’s pleas had an impact on the resolution of the deal, but their communication was frequent, and he called her after the deal was made to thank and congratulate her.

Beshear told the Herald-Leader that he first attempted to call Raimondo about the tariffs in January. She didn’t answer his call because she was attending her confirmation hearing, but the two have spoken about 10 times since, including a face-to-face meeting last week, during which Beshear attempted to bring up the tariffs issue. By this time, Raimondo knew what he was going to say before he said it.

“I started to raise [the topic], and she said, ‘I got it, I’m about to get on a phone call for it, this is atop our agenda,’” Beshear said.

Less than a week later, the deal was complete.

“I appreciated that level of communication,” Beshear said. “For as big an issue as this was to Kentucky, to have the Commerce secretary reaching out to you personally builds not only confidence in me, it built confidence in the industry.”

Hopefully, with a few more calls and a little more begging, Beshear can help lift similar tariffs from the United Kingdom, which still remain in place.