Barton 1792 caused ripples Wednesday with a Facebook post announcing that it will no longer offer in-person distillery tours to visitors, effective June 30. 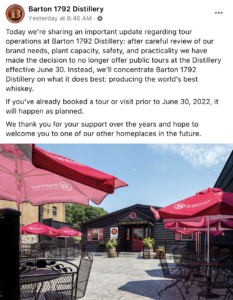 This announcement comes less than a year after the distillery’s $25 million warehouse expansion. The distillery did not cite a specific reason for the closure, but the complete statement reads:

“Today we’re sharing an important update regarding tour operations at Barton 1792 Distillery: after careful review of our brand needs, plant capacity, safety, and practicality we have made the decision to no longer offer public tours at the Distillery effective June 30. Instead, we’ll concentrate Barton 1792 Distillery on what it does best: producing the world’s best whiskey.

If you’ve already booked a tour or visit prior to June 30, 2022, it will happen as planned.

We thank you for your support over the years and hope to welcome you to one of our other homeplaces in the future.”

The Barton website still states that the distillery is fully operating, offering complimentary tours and tastings daily. Presumably, space is not an issue with the recent behemoth expansion of the distillery.

Barton 1792 is the oldest fully-operating Distillery in Bardstown, Kentucky. It sits on 196 acres and boasts 29 barrel aging warehouses, 22 other buildings and the Iconic Tom Moore Spring.

Why Did Barton Close Its Doors to Tours and Tastings?

Although the statement does not give an exact reason, a few explanations could shed some light on why the decision was made.

Barton 1792 is owned by Sazerac, making it the commercial brother to Buffalo Trace, which has a beautiful facility built for tourists and tastings on the Kentucky Bourbon Trail.

Barton is an industrial facility and not set up to be a tourist destination like the Buffalo Trace distillery is. Not to mention, visitors have to drive through the distillery to get to where the tours are held. Being the industrial site it is, the first impression is more akin to a chemical plant than a destination you would want to take a date or visit on vacation, as interesting as the location and distillery itself may be.

The Barton distillery tour is not as extensive as Buffalo Trace’s, and perhaps this closure is an indication that Sazerac would like to push people to the more scenic spot and focus solely on maximizing production at Barton.

As reasonable as that explanation is, it is still disappointing that the world will be blessed by one fewer distillery tour.