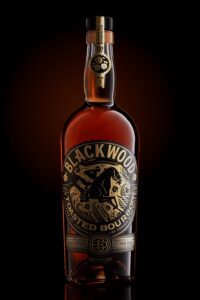 The brand is almost two years in the making and led by owners Guinness and Lisa McFadden. The couple named Blackwood after their stable, home to a 2019 Kentucky Derby-winning thoroughbred.

Having worked his way up through the horse-racing world, going from a groom to owning a Derby-winning horse, Guinness is looking to conquer another booming Kentucky industry, bourbon.

According to The Bourbon review, the new bourbon will retail for $150, and only 1,700 bottles of the whiskey will debut. When it came to selecting barrels for the new whiskey, Guinness enlisted the help of two of his friends for sourcing and blending.

Only nine barrels were picked for Blackwood Toasted Bourbon Batch 1, and while the details of each secondary finish are unknown, they do tell us that the majority of them were toasted.

The final composition is bottled at a cask strength of 121 proof and has notes of crème brûlée, gingerbread, toasted pecan and charred oak. All bottling and labeling was done by hand to add an authentic touch.