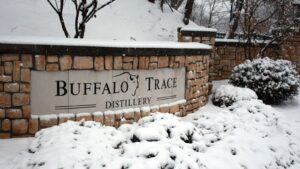 Buffalo Trace is celebrating Movember by launching a campaign in the United Kingdom to raise funds and awareness for men’s health.

Participating bars across the UK will offer a Buffalo Trace Old Fashioned garnished with a mustache-shaped orange peel. The whiskey brand hopes the garnish serves as a reminder of the “importance of conversations in challenging the status quo of men’s health.”

Other events include pop-up barber shops in Bristol and Manchester, where bartenders taking part in Movember will receive complimentary wet shaves while enjoying a Buffalo Trace Old Fashioned.

In Leeds, Lord’s Barbering will offer bartenders a free Buffalo & Sparkling Apple Highball with all wet shaves throughout November.

Buffalo Trace is also holding a giveaway called “The Great Movember Giveaway.” It is free to enter, and all of the donated prizes will be matched in value by the distillery. The prizes include a trip for four people to the U.S., barbecue school, bottles of Buffalo Trace and options to donate.

Chris Richards, marketing director of Buffalo Trace Distillery’s UK distributor, Hi-Spirits, said: “We know the importance of never going it alone and we hope our support helps raise awareness and vital funds for the Movember campaign.”

Whatever you call it, we want to see it.
Show us your Mo. 🔽 pic.twitter.com/Dksk2aIkVa

Also this week, whiskey brand Fistful of Bourbon launched a campaign in which the grower of the best facial hair submitted to the brand via social media will be rewarded with $5,000 and a custom flask engraved with the winning facial hair.

Movember is a movement to raise funds for and create awareness surrounding men’s health, such as prostate cancer, testicular cancer, and men’s suicide, by growing a mustache.