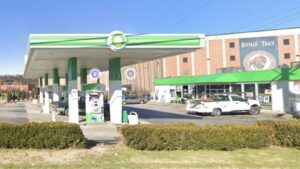 The gas station sitting outside of the Buffalo Trace Distillery in Frankfurt Kentucky will be converted into a new Buffalo Trace space. (Photo: Google Street View)

The new destination will be located in an existing building that currently operates as a BP gas station. According to the distillery, the new venue will offer a unique dining experience featuring food paired with Buffalo Trace whiskeys, as well as a retail space where guests can purchase distillery products.

“At Buffalo Trace Distillery we are always looking for ways to engage and inspire our visitors and residents of our local community alike,” Sara Saunders, vice president of Buffalo Trace Distillery, said in a news release. “As we look to the future, we’re committed to honoring the traditions of our 234-year history while also embracing change as we aim to invite even more whiskey lovers into our family. This exciting project does just that, and we are thrilled to be adding another quality dining and tourism destination for both Franklin County residents as well as the 400,000+ guests from around the world who visit our distillery each year.”

Specific plans are still being finalized, but we do know that the distillery will be uae the space currently occupied by the BP gas station and convenience store, a property Buffalo Trace Distillery already owns. Operations at the gas station will end in August, and Buffalo Trace plans to break ground on the new venue soon afterward. The new destination is expected to open in 2023.