More Women Than Ever Are Finding Success in the Whiskey Industry; Here’s Why – According to a Female Bourbon CEO 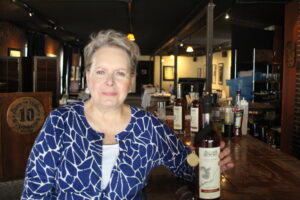 I had the opportunity to sit down with Judith Hollis Jones, CEO of Buzzard’s Roost, and discuss her business prowess, her culinary approach to whiskey and working in a male-dominated industry.

“For International Women’s Day, what I want to say is to all women: It’s very important we support each other. Very important. If we are going to progress, we have to be our strongest supporters.”

Hollis Jones was born and raised in Kentucky and has a deep appreciation for the proud whiskey heritage of her home state. Her food expertise has also landed her a position on the board of Les Dames d’Escoffier International, where she is able to share her love for all things food with other industry professionals. It is clear that Judith brings a wealth of knowledge and experience to the Louisville-based company. 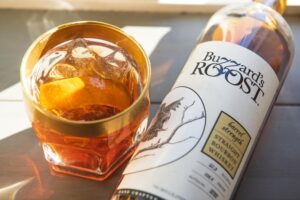 Hollis Jones reflected on the start of the wildly successful brand, and how she didn’t necessarily intend to start it. “After moving back to Kentucky, I began to investigate the bourbon industry, and we decided we’d like to buy part of a barrel for Christmas gifts,” she said. “So I contacted Jason Brauner, who was known for doing barrel picks, and said, ‘Can we go do a barrel pick together?’ We did, and we said, ‘Let’s start a whiskey distillery.'”

Hollis Jones and her new partner weren’t able to raise enough money for a distillery, so they instead decided to start a brand using contract distilling.

Hollis Jones and her team found success early on by bottling award-winning whiskey on their first try.

“I’ll always remember submitting the first rye whiskey that we’d bottled to San Francisco World Spirits Competition and thinking, ‘I just hope we get some medal,’ and it won gold,” Hollis Jones said. “I just remember being so excited. Then the next year, when we submitted whiskey, and it was our toasted barrel, I thought, ‘This is really good. Hope we get gold.’ And when it came back — double gold.”

The whiskey industry has always been male-dominated, but Judith is seeing more female professionals coming into it and finding success by focusing on flavor and hospitality; things that women are very good at.

“You know, being a woman of my age, doesn’t matter what industry, there have always been challenges. One thing I would like to say to, to all women in their careers: Being professional is really important. But I believe the things that are most important are being persistent. It just takes that continuing to press on, no matter what the obstacles look like.”

However, Judith says that philanthropy and giving back are the backbone of her work ethic and brand. Buzzard’s Roost has been known to donate bottles to charities that are dedicated to helping other people.

Enter to win a rare Buzzard’s Roost 15-year-old Bourbon. Two winners will be announced on March 31 on Instagram Live. Raffle tickets are $50 each and available through the link >>> https://t.co/wXko0hxFgA #bourbon #bourbonwomen pic.twitter.com/1juVSERHxZ

“We’ve donated a 15-year-old bourbon that was very good. Not many bottles came out, but we decided that we would give them all to charities that are supporting other people. So we’re donating two bottles to the Bourbon Women Foundation for scholarships for women in the whiskey industry.”

Judith Hollis Jones is a prime example of how to work hard and achieve success in a male-dominated industry. She has an impressive resume, with years of experience in the culinary world as well as the whiskey business. In addition to her professional accomplishments, she is also a strong advocate for women’s empowerment and progress. As Hollis Jones says, “If we’re going to progress, we have to be our strongest supporters.”