Can Bourbon Be Made Outside of Kentucky? | Whiskey Raiders

Many Drinkers Think Bourbon Only Comes From Kentucky; Here’s Why They’re Wrong 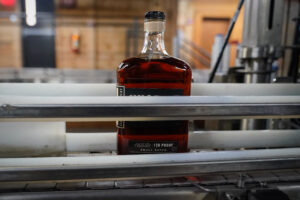 A bottle of bourbon moves through the bottling plant at The Jim Beam Distillery on Feb. 17, 2020, in Clermont, Kentucky. Can Bourbon be made outside of Kentucky? (Photo by Bryan Woolston/Getty Images)

Bourbon is a type of American whiskey that is made primarily from corn. It is usually distilled to between 40% and 60% alcohol by volume and aged in new, charred oak barrels.

Bourbon is so closely associated with Kentucky that many drinkers assume bourbon must, by definition, come from Kentucky. That is not the case, however. Bourbon can be made outside of Kentucky, although the vast majority is made in the state, for a few reasons. First, Kentucky has an ideal climate for aging bourbon. The warm summers and cold winters allow the bourbon to expand and contract in the barrels, which contributes to its flavor profile.

Second, Kentucky has an abundance of limestone, which filters out impurities in the water used to make the bourbon. This results in a smoother, more consistent flavor, according to most distillers, who find the filtered water preferable for production.

Third, many of the world’s best bourbon distilleries are located in Kentucky. This includes iconic brands like Jim Beam and Buffalo Trace. As a result, Kentucky is more or less synonymous with bourbon, and Bardstown, Kentucky, is called the “Bourbon Capital of the World.” Over the past 20 years, many distilleries have renovated and unveiled tourist-based experiences to help reinforce the region’s appeal to those seeking whiskey.

However, there are a number of other distilleries across the United States that produce their own bourbon. While the exact ingredients and methods used vary from distillery to distillery, all bourbons must meet certain legal requirements in order to be officially classified as bourbon.

So, while bourbons made outside of Kentucky may have different flavors and characteristics, they are all still bourbon.

What is Bourbon, and What Separates it From Other Whiskeys?

In 1964, the United States Congress recognized Bourbon Whiskey as a distinctively American product. In order to be labeled as bourbon, the whiskey must meet a number of requirements set out in the Federal Standards of Identity for Distilled Spirits.

For example, when making bourbon, the mash (the mixture of grains that will be distilled) is typically cooked at a lower temperature than when making other whiskeys. This allows for more of the sugars in the mash to be converted into alcohol.

Bourbon’s flavor profile is often described as sweet, spicy and occasionally smoky. This flavor profile is due to the fact that bourbon is typically made with a varying proportion of rye, wheat, malted barley and other grains in the mash. A high percentage of corn, combined with the caramelized sugars of the charred barrel, contribute heavily to the perceived sweetness of the finished product. Bourbon can’t have added sugars, flavors or coloring.

As with any good rule, there is always someone waiting to break it. The rules of bourbon are no exception. One Welsh distillery in particular, Mallows made a “Welsh Bourbon.”

We’ve seen this, albeit rarely, from other brands as well, like Single Cask Nation’s Scottish-aged Heaven Hill release.

So, the answer to this question is yes. Bourbon can be made outside of Kentucky and regularly is. In fact, many distilleries are popping up all over the country (there are more than 2,000 today) as whiskey and bourbon in particular continue to explode in popularity.