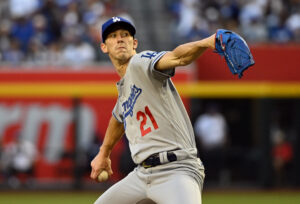 Walker Buehler of the Los Angeles Dodgers delivers a first-inning pitch against the Arizona Diamondbacks at Chase Field on April 25, 2022, in Phoenix, Arizona. (Photo by Norm Hall/Getty Images)

Walker Buehler, starting pitcher for the Los Angeles Dodgers, is doing what he can to help his home state of Kentucky during a crisis.

Much of the state experienced deadly flooding due to a storm that dropped between 8 and 10.5 inches of water in a matter of 48 hours. The floods have caused major damage to the state, and countless Kentuckians need resources to recover from the unfortunate event.

Buehler, who is from Lexington, Kentucky, has teamed up with Louisville-based Michter’s Whiskey to raise money for the relief effort. The official Instagram account of the whiskey company announced that Buehler and his wife, McKenzie, are donating three autographed bottles of their favorite Michter’s and an autographed jersey.

The bottles are being donated to the Kentucky Bourbon Benefit. Fans of the Dodgers, Michter’s or helping a good cause can bid on the auction here.

After removing a bone spur and undergoing 12 weeks of recovery earlier this year, the pitcher has not let his injury stop him from helping out his home state in its time of need. The Buehlers are well-known fans of Mitcher’s, and with bourbon being the native spirit of Kentucky, this is a fantastic way to not only pay tribute to Kentucky but help its residents.