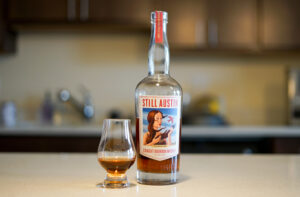 A craft distillery in the heart of Texas has taken home double gold in the 2021 San Fransisco World Spirits Competition. The grains in this whiskey are 100% whiskey as well. “The company’s flagship high-rye bourbon features grains that are 100% grown by Texas farmers.” According to Business Wire.

We are proud to share that our Straight Bourbon, “The Musician” was given a “Double Gold” award at the @sfwspiritscomp! It’s truly an honor to receive this award and we are beyond stoked! 🥃🏅 pic.twitter.com/DngwfrMNMg

Founded in 2015, the distillery focussed on a grain-to-glass concept. The distillery is committed to never outsourcing its process for producing quality whiskey. Business insider claims everything is managed in-house meaning the milling, mashing, fermenting- everything happens on-premises.

As far as the bottle goes, the distillery hired artist Marc Burckhardt to paint portraits that would conceive a sort of Austin Texas Mythology. Still Austin says the bottle represents everything Austin aspires to be.

Patrons can expect “A bit of cereal, hint of must, wafer cookie, pepper, and oak. Faint honey note. Satisfying.” according to our very own T8ke here at Whiskey Raiders.