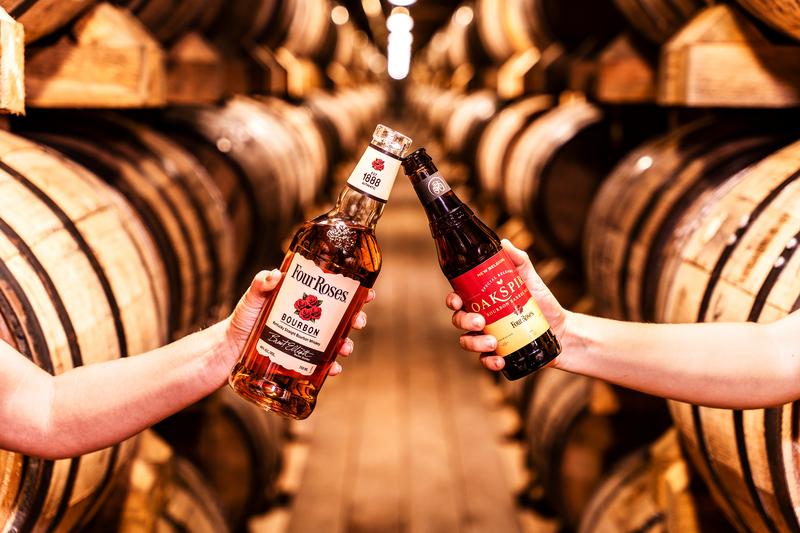 In an alliance between giants of disparate alcohol sectors, Four Roses, one of the world’s most popular bourbon brands, and New Belgium, the U.S.’s 11th-highest-selling brewery, are collaborating on a beer that uses a new, proprietary infusion method.

The ale, which the two brands are marketing as “THE Beer for Bourbon Lovers,” is a new take on New Belgium’s Oakspire Bourbon Barrel Ale, which was released in 2018. The new infusion method pulls flavor from the bourbon barrel by adding charred oak chips from the bourbon barrels to the beer. According to a news release announcing the new release, these oak chips contain caramelized wood sugars, meant to add notes of brown sugar, caramel and toffee.

Next, a barrel maker in Minnesota toasts a blend of oak spirals and then soaks the spirals in Four Roses bourbon. The charred oak chips and wood spirals are then held in stainless steel vessels, through which New Belgium’s high-rye base ale is circulated during maturation, infusing the ale with flavor from the oak chips and spirals.

The result is a 9%-ABV bourbon barrel ale containing nugget and sabro ops. Its color is described as deep amber, while its tasting notes include toffee, vanilla, caramel, coconut and dark fruit.

Oakspire Bourbon Barrel Ale is available for purchase at select retailers across the country. You can find it near you with New Belgium’s beer finder.

New Belgium and Four Roses are both owned by Japanese alcohol company Kirin Brewery, which is best known for its beer but this year exported its whiskey to the U.S. for the first time.