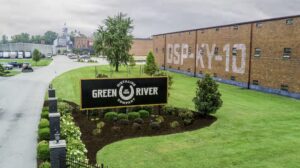 Green River Distilling master distiller and director of operations Jacob Call is leaving the company at the end of July, but he’s not going too far.

The Messenger-Inquirer reported Thursday that Call isn’t leaving the bourbon industry or Owensboro but will move on to a new venture that he can’t talk about until the noncompete clause in his contract expires on Oct. 31.

The timing is interesting, considering Green River was acquired by Bardstown Bourbon Company a mere six weeks ago. Even more interesting? The acquisition became official Wednesday — a day before Call announced his departure.

“I was very disappointed that Jacob decided to leave,” Mark Erwin, the new CEO of Green River Spirits, said. “He’s someone I trust. He’s been helpful to me in the past. I was looking forward to working with him.”

The acquisition was finalized this month when Bardstown Bourbon Co., now owned by Pritzker Private Capital, took over ownership of Green River Spirits. Jacob told the Messenger-Inquirer that the decision to leave is “bittersweet,” but he is looking forward to doing something on his own.

“Mark is a great guy, and he’ll do a fine job here,” Call said of Erwin. “I wish him well. It’s a friendly breakup.”

Call has worked on bourbons with big names both in and out of the spirits industry, including Terry Bradshaw and country singer Alan Jackson, which he called the highlight of his career.

“I always want to leave something better than I found it,” Call said. He took over Green River at a time when it hadn’t been operational in more than a century. Last year, the distillery produced more than 94,000 barrels of bourbon and rye.

Call certainly left Green River better than he found it, and now it’s time for his next chapter — whatever that may be.