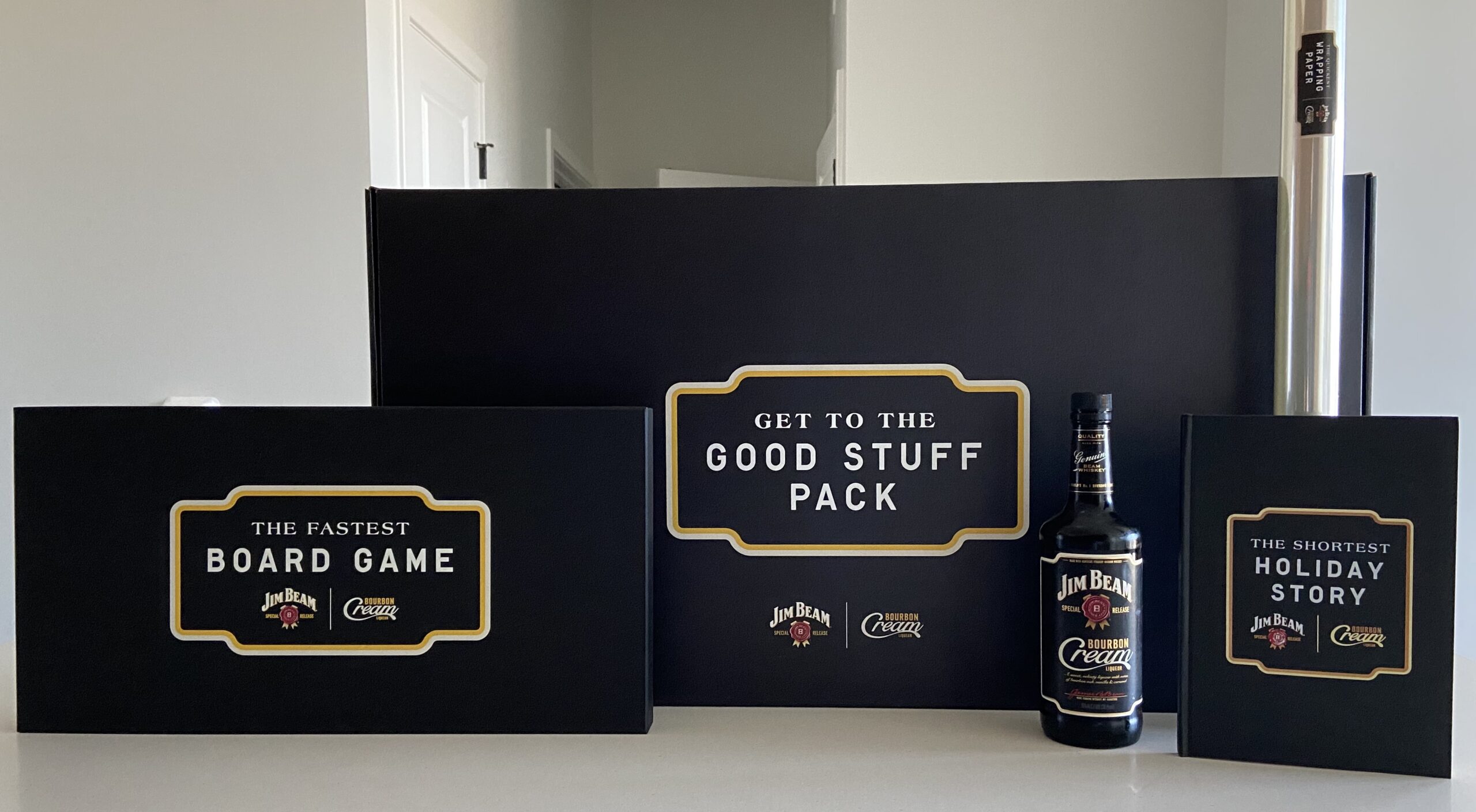 Jim Beam’s “Get to the Good Stuff” holiday kit is a hilariously intricate gag gift.

Jim Beam has a message for you this holiday season: Don’t spend your time dawdling. The holidays are about spending quality time with loved ones, relaxing and enjoying a few drinks. There’s no need to waste time with formalities, and this holiday season, Beam offered the perfect Christmas gift to express that sentiment.

Beam released a limited-edition bourbon cream for the holidays, and to promote it, a holiday bundle called the “Get to the Good Stuff” kit.

The kit features wrapping paper, a holiday story and a board game, all created to be finished quickly so you can get to the good stuff with no time wasted. We had to check this out and are here to share details. 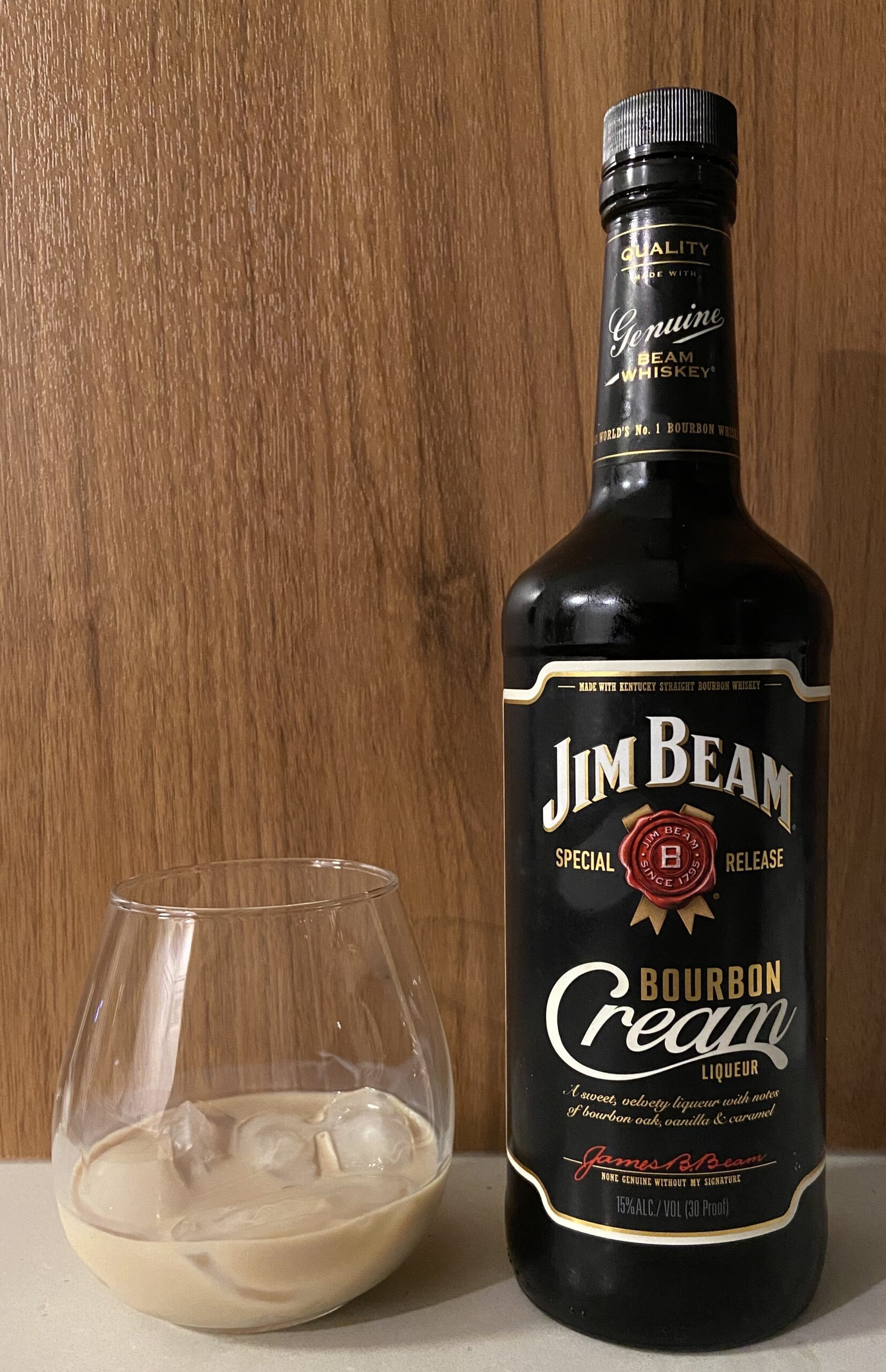 In the spirit of getting to the good stuff, it’s only right that we tell you about the bourbon cream first and foremost. Honestly, it’s delicious. Sweet and decadent, sipping Jim Beam Bourbon Cream on the rocks is like drinking a milkshake. It’s thick, creamy and silky smooth in texture, and sweet in taste. Jim Beam lists the flavors in its bourbon cream as vanilla, caramel and oak, which is all true. It’s heavy on the vanilla, and we also picked up notes of hazelnut.

December was the perfect time to release this limited-edition product, because the holiday season is precisely when you’ll want it. This is no summer drink; it’s something to sip by the fireplace as a nice dessert. 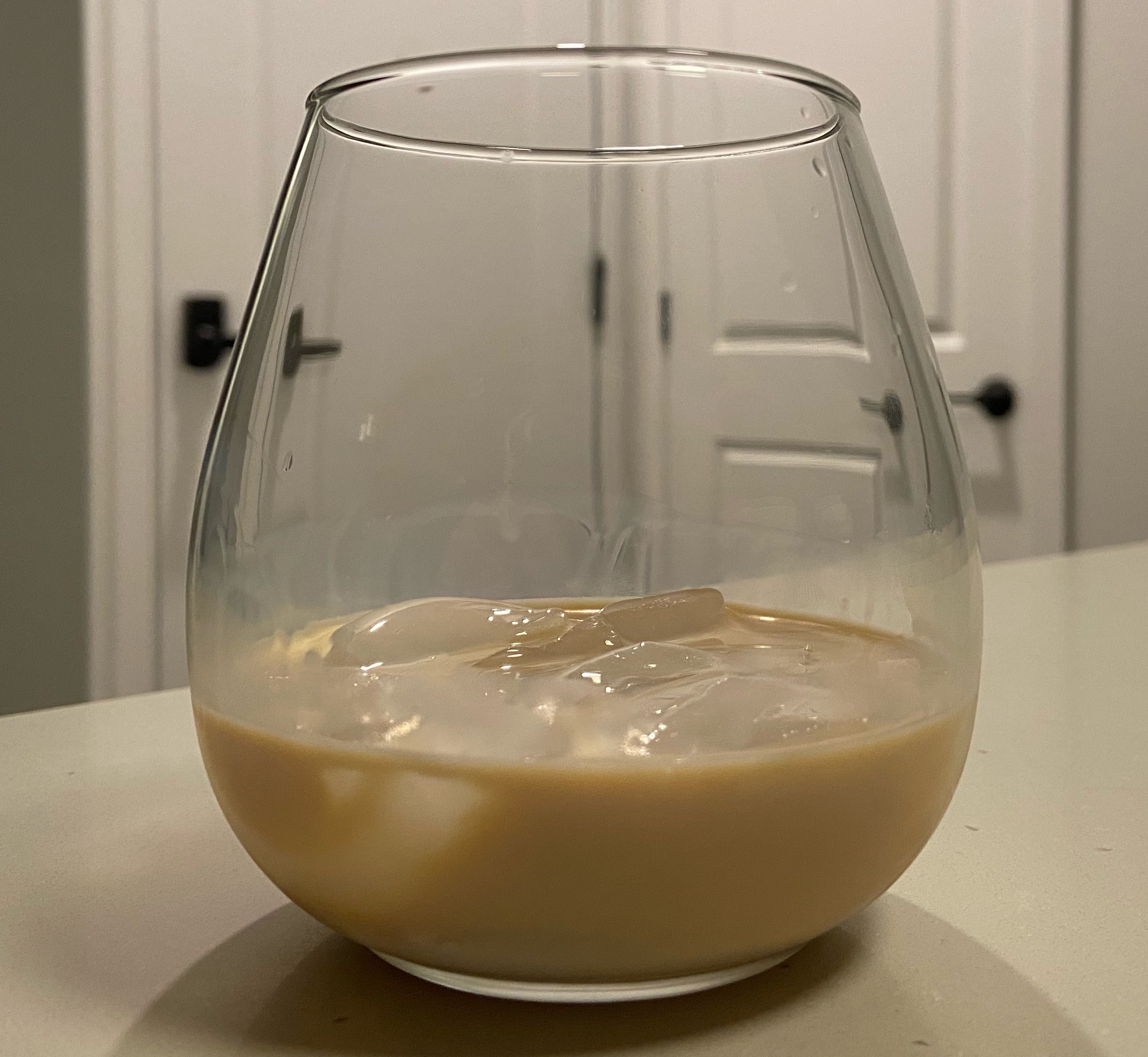 The second recipe is Jim Beam Bourbon Cream Hot Chocolate, which consists of six parts hot water, one part hot cocoa mix and two parts bourbon cream (Jim Beam recommends topping the hot chocolate with cinnamon, whipped cream or marshmallows). We tried this one, and it was delicious. Hot chocolate made with water instead of milk can often be underwhelming, without enough flavor. But thanks to the bourbon cream, this recipe is just the right amount of creamy, and the bourbon cream complements the hot cocoa flavor perfectly. Next time, we’re going to seek out some peppermint hot cocoa mix, or perhaps add some peppermint schnapps or peppermint cream, as we felt this would be even tastier with a little mint. 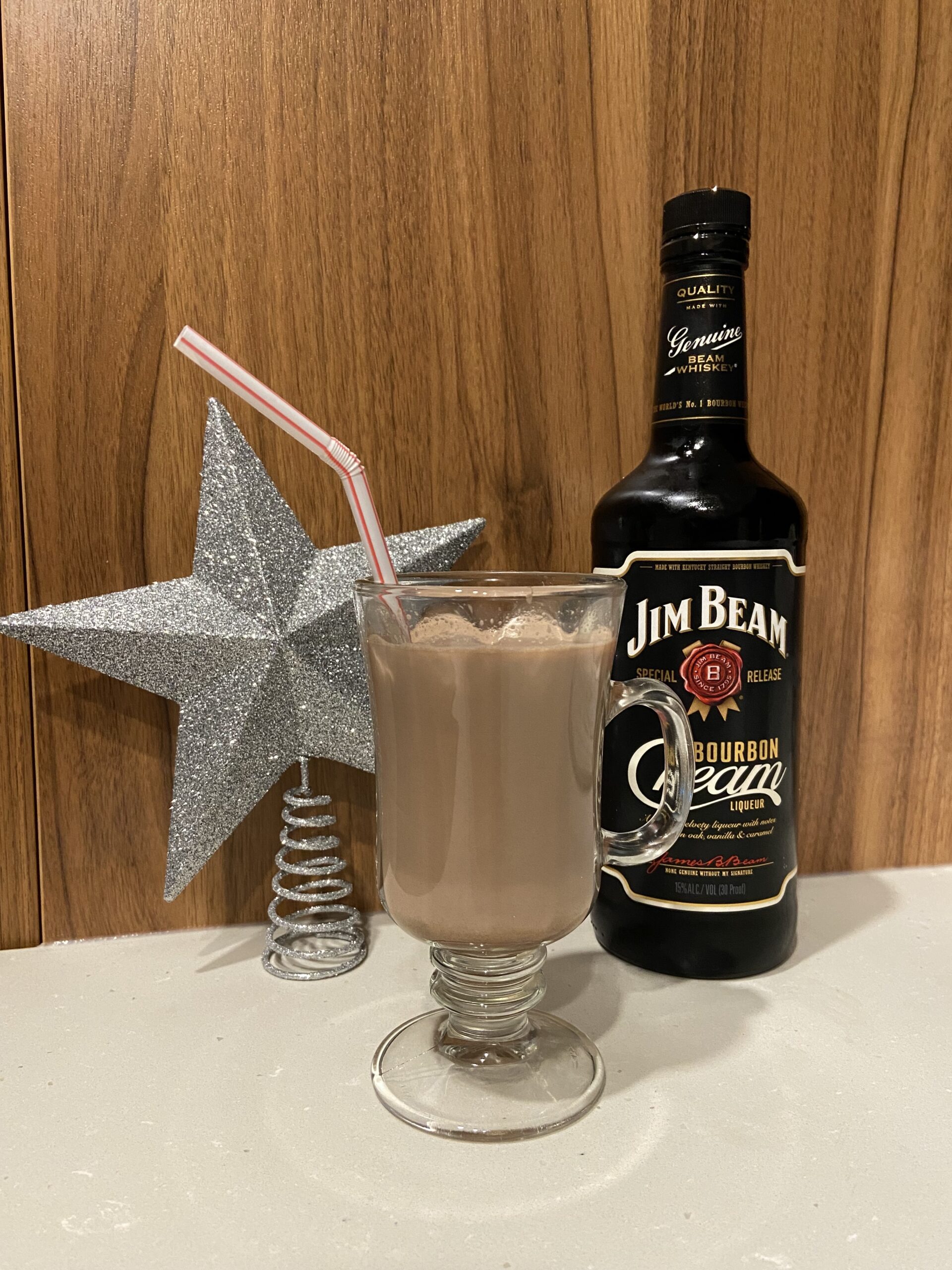 Speaking of the mint twist, Emily Hampshire, whom you might know from her role as Stevie in hit TV show Schitt’s Creek, recommended adding the bourbon cream to a peppermint mocha latte in an interview with ComicBook.com. Hampshire is an ambassador for Beam’s “Get to the Good Stuff” campaign. 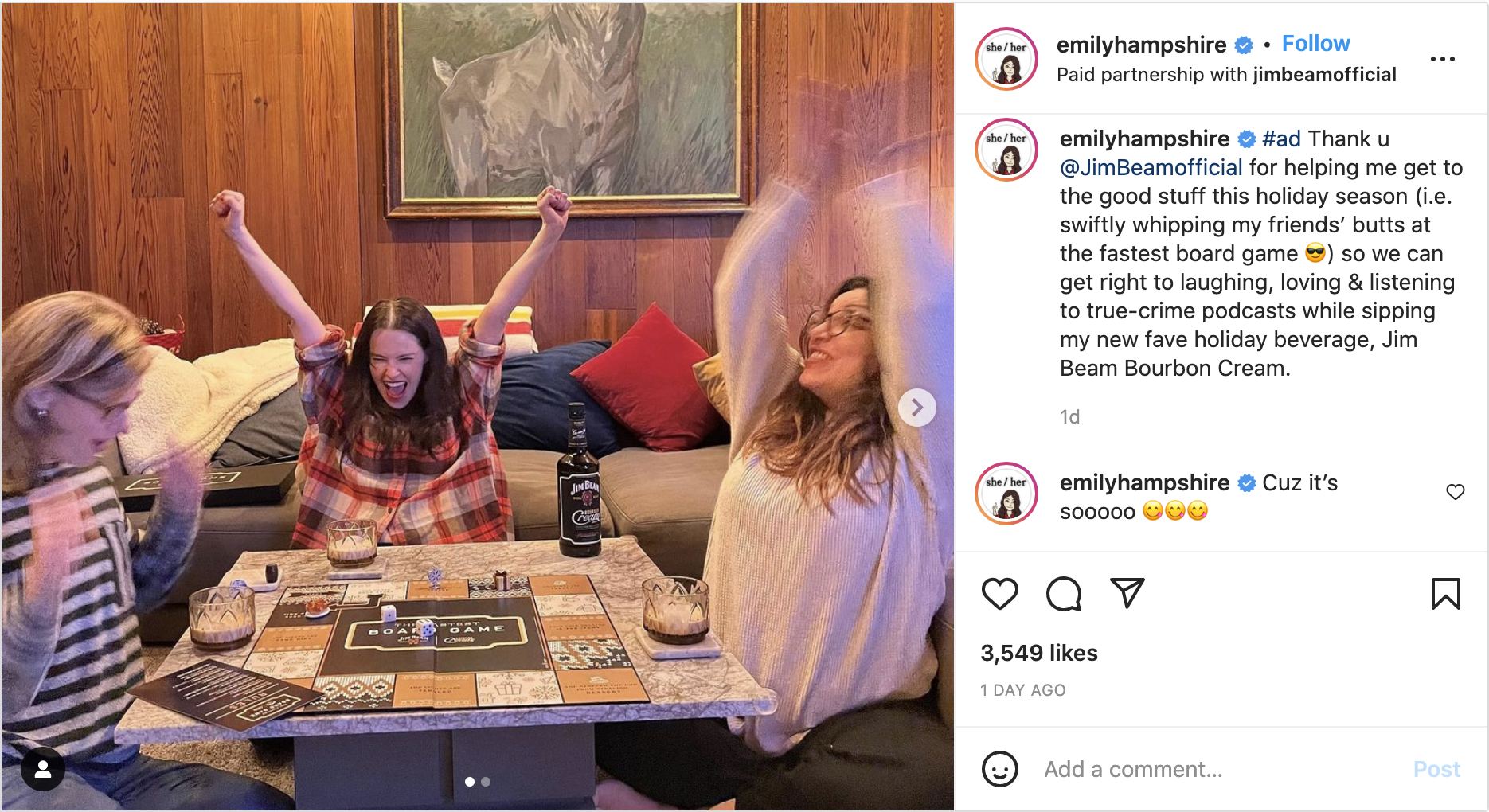 You can also experiment on your own. We made a variation on the classic White Russian that replaces vodka with bourbon and cream with bourbon cream. It was very tasty, and we recommend it if you’re looking for something stronger than just the bourbon cream on rocks or in hot chocolate or coffee.

Now, on to the holiday kit. 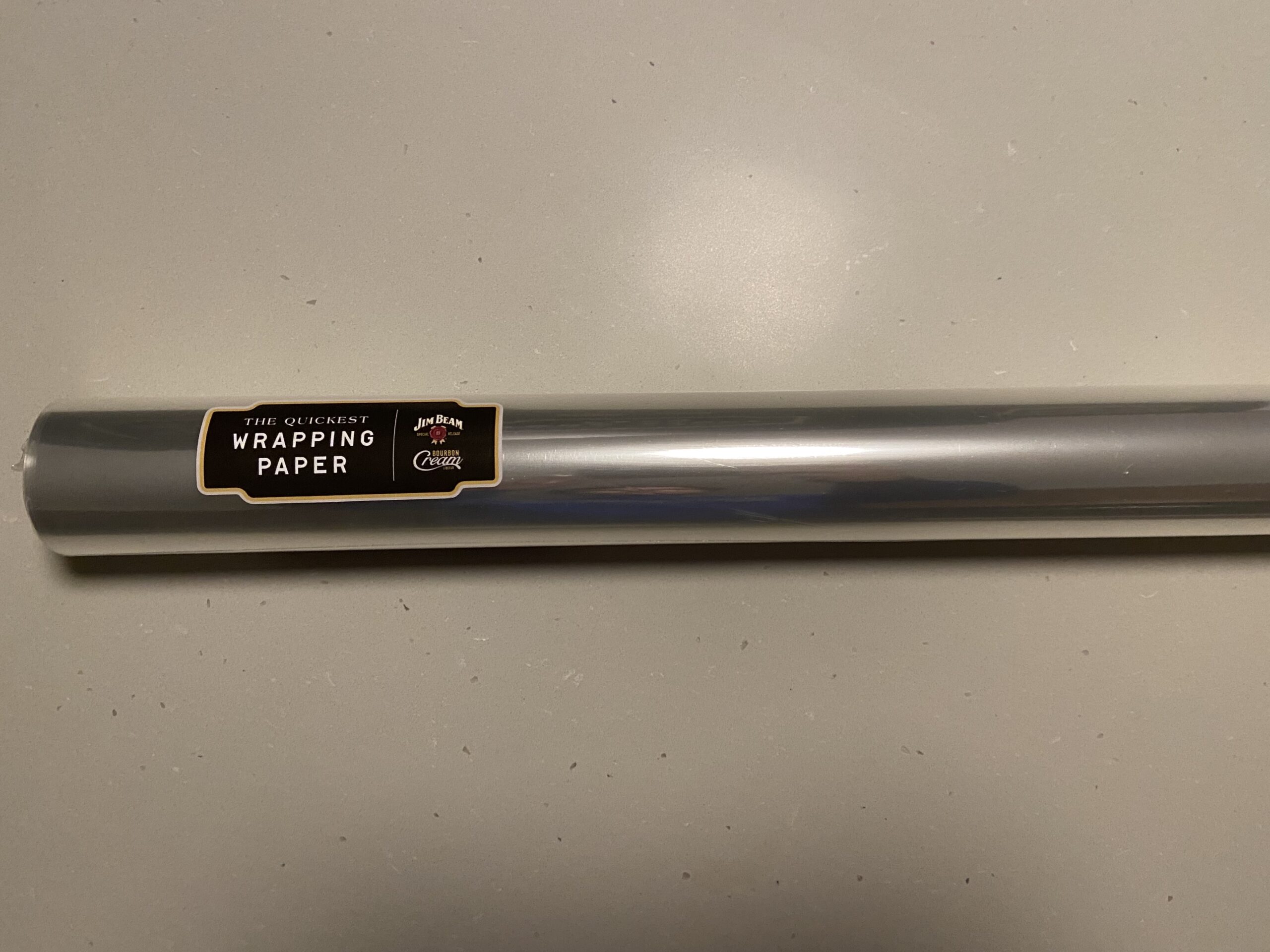 Why waste time unwrapping gifts? Beam’s roll of wrapping paper is transparent, so you don’t need to spend time figuring out how to remove bows or tear through endless holiday-print paper. With this wrap, you can simply give each gift a glance, identify what it is, express your gratitude and move on — ya know, to the good stuff. 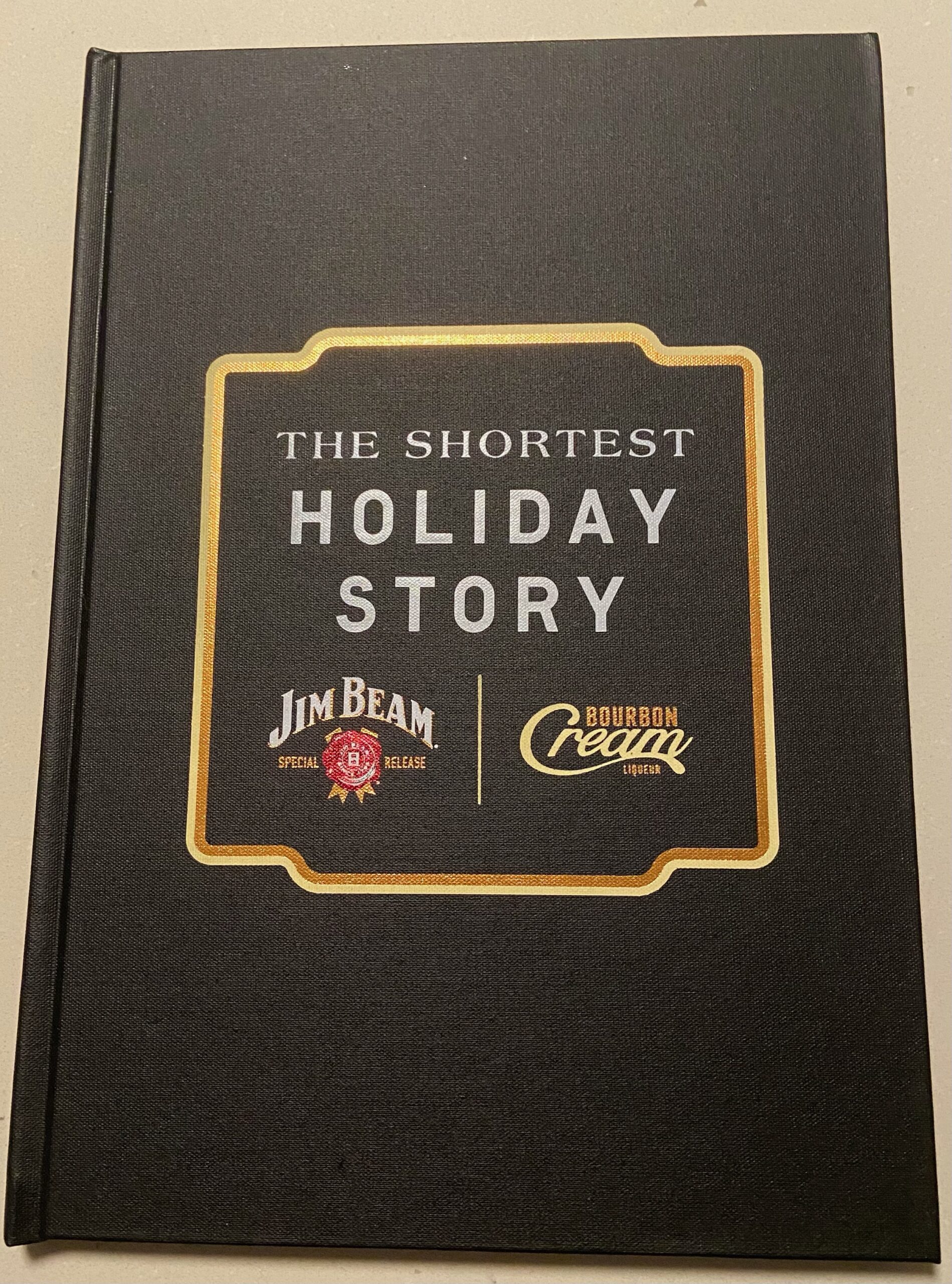 The Shortest Holiday Story is a hardback book that won’t take days to read. The entire story is 26 words, two of which are “The End.”

That last paragraph describing the story also was 26 words, so however long it took you to read that, expect to spend about that long on the story.

The Fastest Board Game 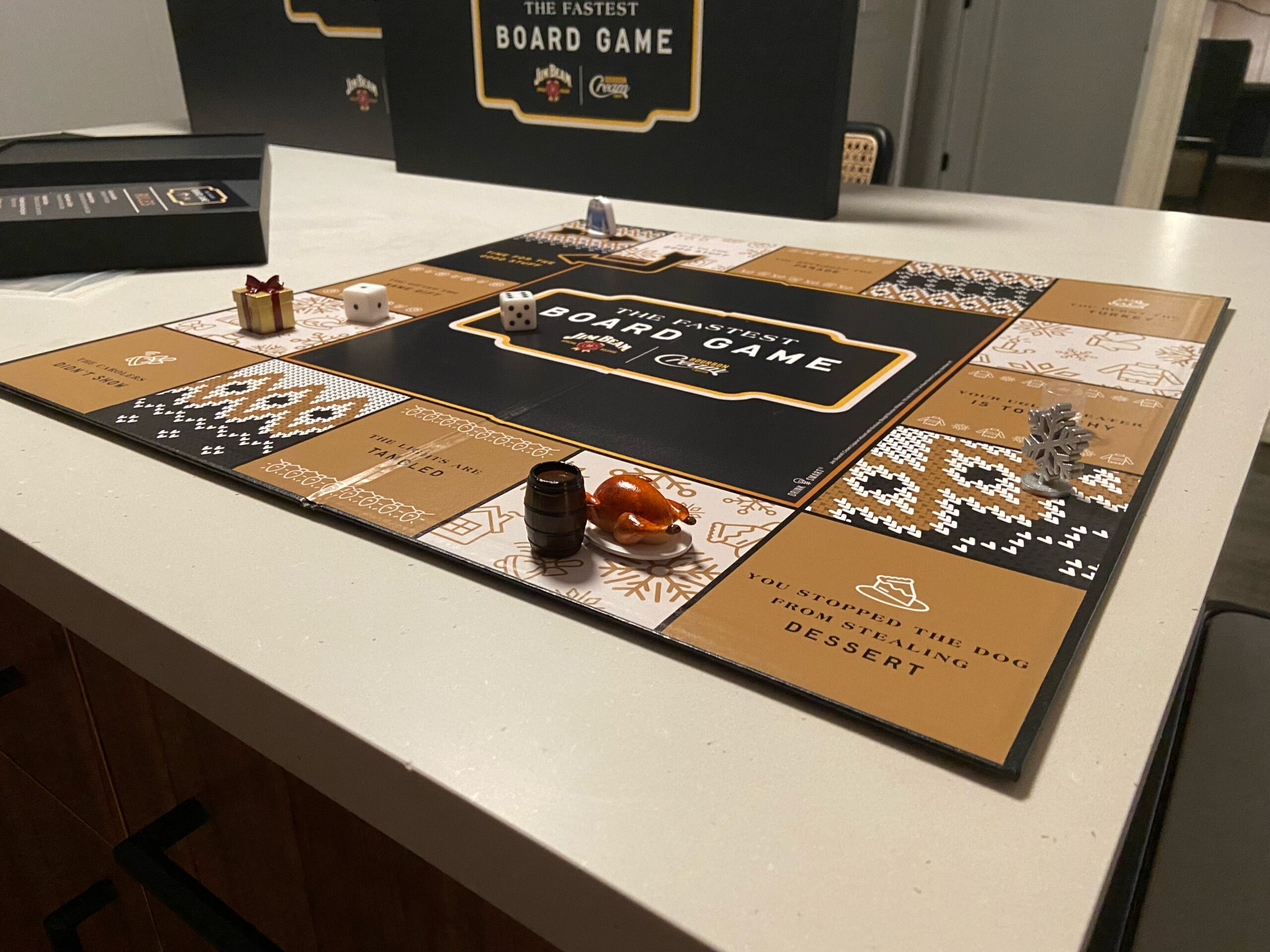 Jim Beam’s “The Fastest Board Game”

The Fastest Board Game is a pretty standard board game, in which each player takes turns rolling a die, with the goal being to reach the last square on the board (called the “Time for the Good Stuff” square in this game). Some tiles you land on during your trek around the 16-tile board will help you on your way (the “You Recorded the Parade” spot lets you move forward three squares), while others will punish you (the “Your Ugly Sweater is too Itchy” tile sets you back, forcing you to skip your next turn).

The Fastest Board Game comes with two dice, and the length of the game is dependent on which one you use. One die is standard. If you play with that one, the game will probably last about five minutes, give or take a few minutes depending on luck and how many players you have. The other die features a “1” on all six sides. Rolling a 1 on your first roll wins you the game, as the first square after “Start” guides you directly to the end. So if you play with that die, be sure to roll first. 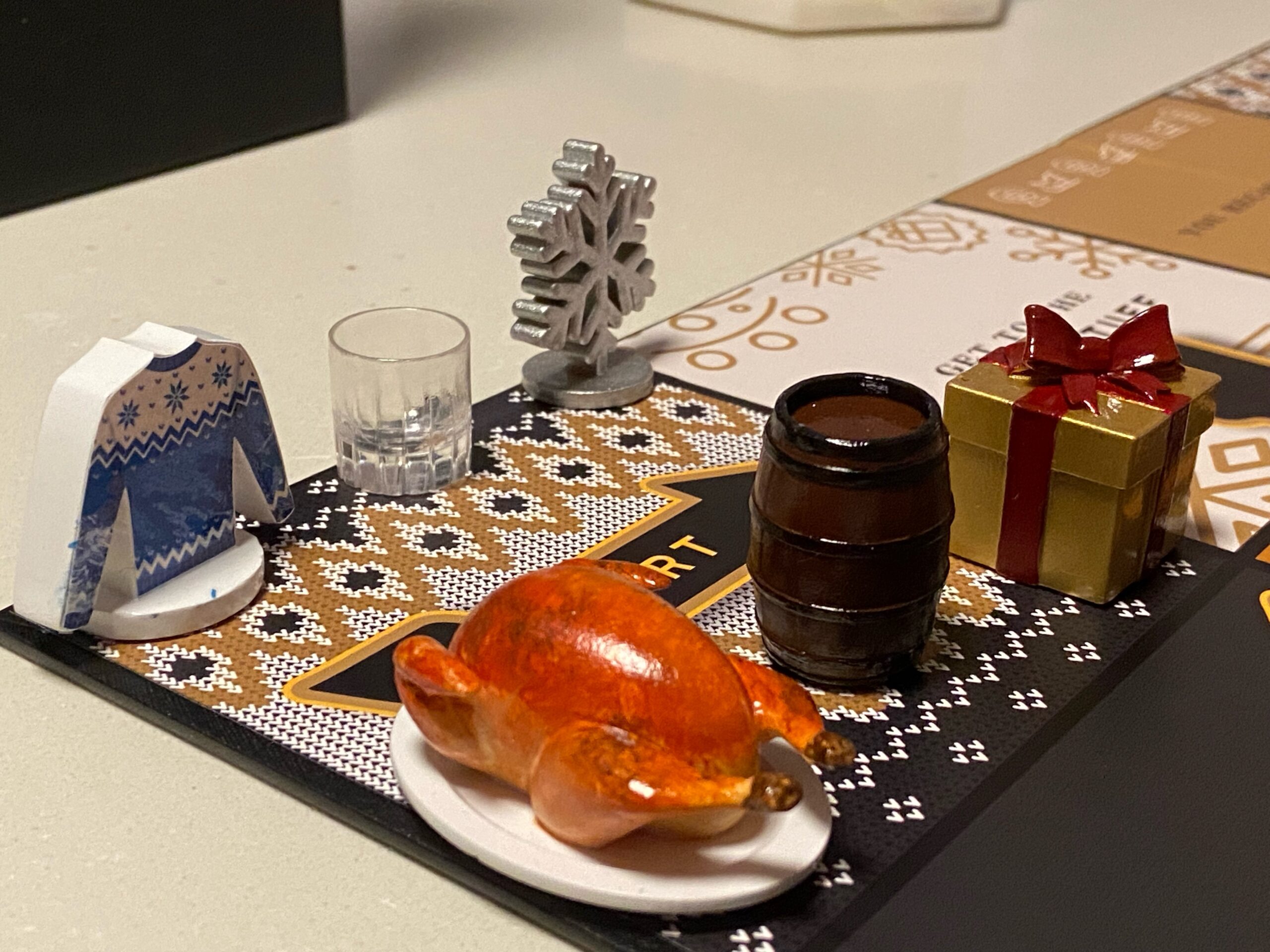 The pieces for Jim Beam’s “The Fastest Board Game”

The Jim Beam “Get to the Good Stuff” kit is the most elaborate gag gift we’ve ever seen (although the Miller High Life Gingerbread Dive Bar gives it a run for its money). It’s a hilarious concept and very well-executed. At only $19.99 (sold without the bourbon cream, which costs another $19.99), it was available at a great price point before selling out, especially considering that nothing in the kit feels cheaply made whatsoever. The kit is also a great size. At about 33 inches by 18 inches, the box was much larger than we were expecting, which should add to the shock and laugh value when it’s opened on Christmas morning. When it comes to gag gifts, the bigger the better. It helps that the bourbon cream is so good. If you went through all of this to “Get to the Good Stuff,” and then the “Good Stuff” the kit was promoting was just meh, that would ruin the whole point. Fortunately, that wasn’t the case.

This was a great promotion by Beam, and we’re excited to see what the company has up its sleeve for future holidays.

Disclosure: Jim Beam provided the Bourbon Cream and “Get to the Good Stuff” holiday kit. No commission was made from the recommendations in this article.