This month Kentucky’s own Bluegrass Distillers are releasing a heated, bottled-in-bond bourbon whiskey; for a limited time. 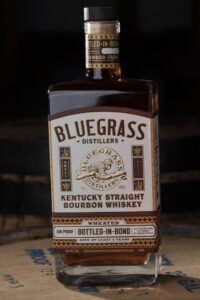 “This small batch release will use Bluegrass’ Wheated mash bill of 75% corn, 21% wheat, and 4% malted barley. Bottled-in-Bond is a federal designation that mandates a bourbon must be made by one distillery in one season, aged at least four years in a federally bonded warehouse, and bottled at 100 proof in order to highlight the skill of the distiller.” Says Kentucky Bourbon Trail.

The small-batch wheated bourbon is a mix of four barrels, all aged 4.5 years. According to Kentucky Bourbon Trail, the batch has well-balanced notes of butterscotch, vanilla, toasted sugar, caramelized brown sugar, fig, apricot, honey, citrus, and oak. But take note, there are only 920 bottles available, so the new release might be hard to come by.

In a prepared statement, Bluegrass said they are “currently undergoing a major expansion at the Historic Elkwood Farm in Midway, KY where they will relocate with an expanded distillery, barrel warehouses, tasting room, visitor center, and event spaces in late 2021.”

Can’t wait to get your hands on a bottle of the wheated bourbon? Bottles of the Wheated Bottled in Bond will be available for purchase from the Bluegrass Distillers distillery location. They will also be available through distribution in the next couple of weeks.