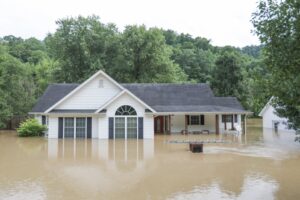 A house half submerged by flood waters from the North Fork of the Kentucky River in Jackson, Kentucky, on July 28, 2022. – At least three people have died after torrential rains caused massive flooding in eastern Kentucky, leaving a number of people stranded on rooftops and in trees, the governor of the southeastern US state said Thursday. (Photo by LEANDRO LOZADA/AFP via Getty Images)

The Kentucky Distillers’ Association has teamed up with the Bourbon Crusaders and bourbon expert Fred Minnick to host the Kentucky Bourbon Benefit, an online auction featuring exclusive private barrel experiences, rare and vintage spirits, and unique tasting and tourism offerings to help Kentucky flood victims. All proceeds from the auction will go towards recovery and rebuilding efforts in Eastern Kentucky.

For the past month, Kentucky has been dealing with the aftermath of floods that caused widespread damage across the state. Kentucky, the birthplace of bourbon, sustained catastrophic flooding due to excessive rainfall in July. The floods began at the end of the month, when a series of storms brought record amounts of rain to the area. The resulting flooding led to the closure of roads and schools, evacuations of homes and businesses and, ultimately, 25 deaths.

“I know this will make a tremendous impact for our people and I am grateful for the continued support.”

“I wish we didn’t have to do this,” Minnick said. “But the Bourbon community deeply feels for their neighbors in Eastern Kentucky, as we did for the Western Kentucky tornado victims, and we will do everything within our power to ease the situation for the flood survivors.

“This is about our friends, family and neighbors. We must be there for them.”

The online auction will begin at noon ET on August 11 and run until 11 p.m. August 21. Go to www.kybourbonbenefit.com to view auction items and bid. Westport Whiskey & Wine in Louisville coordinates the collection and distribution of donated items.

All proceeds will go directly to the state’s official Team Eastern Kentucky Flood Relief Fund to assist those impacted by flooding. To learn more or make a donation, visit https://secure.kentucky.gov/FormServices/Finance/EKYFloodRelief.